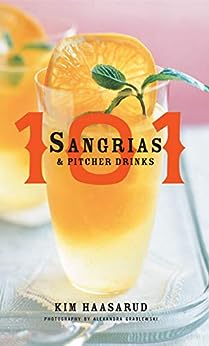 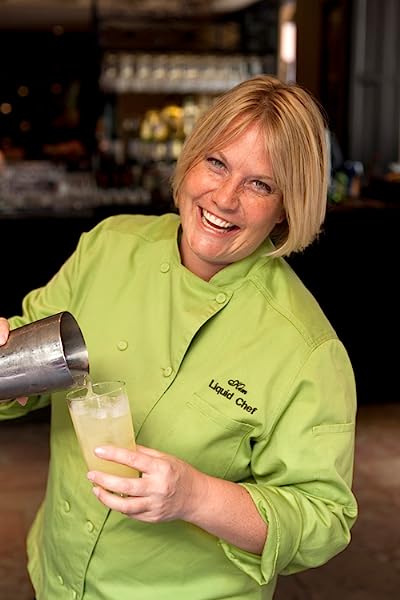 by Kim Haasarud (Author), Alexandra Grablewski (Author, Photographer) Format: Kindle Edition
See all formats and editions
Sorry, there was a problem loading this page. Try again.
"Welcome to the wonderful world of sangrias and punches, names that conjure up good times with great friends. Go get some wine, hit the local produce market, grab a few spirits and ice, and have at it. Enjoy!"
--From 101 Sangrias & Pitcher Drinks
Read more
Previous page
Next page
Due to its large file size, this book may take longer to download

Perfect for casual entertaining, fruity sangrias and punches are cool, refreshing, and just plain fun to drink. They′re creative, informal, and best of all they′re simple to make, since you can mix a party′s worth in a pitcher and don′t have to worry about getting the proportions exactly right. In this beautiful little book, Kim Haasarud, the Liquid Chef, gives you 101 different ways to get the party rolling with sangria or punch. You′ll find recipes for classics such as Spanish Sangria, Singapore Sling, and Spiced Winter Cider, to name just a few. But you′ll also discover lots of delicious contemporary libations that are guaranteed party pleasers, such as White Peach Sangria and Watermelon Yuzu Punch. And for special occasions, try one of Kim′s themed drinks, like a Superbowl Sangria for the big game or a Pink Petal Punch "bridal bowl" for a wedding shower. So invite some friends, slice some fruit, and pull out a pitcher. With the sensational choices for sangrias and punches in this book, party–perfect drinks are easier than ever. --This text refers to an alternate kindle_edition edition.

"Welcome to the wonderful world of sangrias and punches, names that conjure up good times with great friends. Go get some wine, hit the local produce market, grab a few spirits and ice, and have at it. Enjoy!" —From 101 Sangrias & Pitcher Drinks --This text refers to an alternate kindle_edition edition.

KIM HAASARUD is the founder of Liquid Architecture (www.liquid–architecture.com), a beverage consulting firm that creates specialty cocktails for clients such as the Four Seasons, Omni Hotels, and TGI Fridays. She conceives her signature cocktails much as an Alice Waters or a Wolfgang Puck would create a specialty dish, taking inspiration from market–fresh, high–quality ingredients. Kim′s liquid cuisine has stirred up a huge following, and her cocktails have appeared in publications ranging from the Wall Street Journal to the Wine Enthusiast to Cosmopolitan . She is also the author of 101 Martinis and 101 Margaritas . ALEXANDRA GRABLEWSKI is a well–known food and beverage photographer whose work has appeared in Gourmet, Martha Stewart Living, Real Simple, Better Homes and Gardens, and Wine Spectator as well as in many cookbooks. --This text refers to an alternate kindle_edition edition.
Read more

Kim Haasarud is a James Beard-honored mixologist, author, and beverage consultant. She conceives her signature cocktails much as Alice Waters would create a specialty dish, taking inspiration from market-fresh, high quality ingredients. “Cocktails, like food, should be culinary experiences,” says Haasarud. “It is about combining ingredients to create a sensation on the palate and entice all the senses with a combination of flavors, textures, aromas, and garnishes.”

You won’t find the standard Cosmopolitan or mix-based Margarita on Haasarud’s ever-changing bar card. Instead, depending on the occasion or the season, she might shake up Martini infusing teas with fresh muddled fruits, or concoct a Margarita with ripe kumquats or a combination of kiwis and fresh herbs.

Like many of her peers, Haasarud bartended her way through college. But what was just a job for most became a creative outlet for her keen sense of taste. It also sparked an enduring passion for building great cocktails, one that Haasarud still longed to indulge after graduating and going to work in film and television. She found her opportunity in the many industry parties she attended. “The drinks and the bars were always the same and always boring, despite very creative food and themes,” says Haasarud. “I recognized that a great cocktail experience would add a rich element to each event.” And thus, Haasarud’s company, Liquid Architecture, was formed.

Kim has been a judge on Iron Chef America, as well doing guest appearances on the “The Today Show,” CBS’ “Early Morning Show,” “Fox & Friends Live,” “Montel Williams Show”, “Sonoran Living”, “Your Life A to Z” and Plum TV. She has been featured on various radio programs including “Good Food” with Evan Kleiman, Martha Stewart’s “Everyday Food”, “Cosmo Radio” and ABC & CNN Radio syndicate. Her cocktails have been seen in hundreds of magazines and newspapers such as the Wall Street Journal, NY Times, LA Times, San Francisco Chronicle, The Washington Post, Saveur, Edible LA, Vogue, SELF, Wine Enthusiast, BRIDES, Woman’s World, Lucky, Glamour, Cosmopolitan, and Associated Press to name a few. She is also REDBOOK Magazine’s “Mommy Mixologist” providing recipes in a monthly column as well as an online blog.

She lives with her husband Kevin, two children Holden & Maddy, and dog Emi in Phoenix, AZ.

4.6 out of 5 stars
4.6 out of 5
105 global ratings
How are ratings calculated?
To calculate the overall star rating and percentage breakdown by star, we don’t use a simple average. Instead, our system considers things like how recent a review is and if the reviewer bought the item on Amazon. It also analyses reviews to verify trustworthiness.

Neesie
5.0 out of 5 stars Party time
Reviewed in the United Kingdom on 19 July 2017
Verified Purchase
Great book with some really nice and quick recipes, great for parties.
Read more
One person found this helpful
Report abuse

Library girl
3.0 out of 5 stars Why only 75 pitcher drinks?
Reviewed in the United States on 29 November 2014
Verified Purchase
First, the good--this book has 42 innovative and beautiful sangria recipes, along with some batched cocktails, seasonal punches, lemonades, etc. You could probably make just a few of these and justify the purchase price.

Now, the not as good--in spite of the title, 25 of the recipes are inexplicably single-serving versions of mostly standard drinks (Mai tais, singapore slings, Pimm's cup), for which recipes are already readily available. The reader is assumed to be near well-stocked stores (yuzu fruit and hard-to-find spirits). A number of the batched drinks are fussy (shake each serving in a cocktail shaker)--to me, the whole point of a pitcher drink or punch is to make it easy on the host. Some of the punch recipes are for the base, then the reader is left to guess how much alcohol to add.

Last, while there are some great tips on getting the most out of fruit, the book could have included quite a bit more on things making ice blocks or molds for cooling, containers, estimating serving sizes, how to "scale up" recipes (with large-scale recipes, it's seldom as easy as just doubling). I bought this book for a gift, but also ended up buying Cocktails for a Crowd to give with it, because Cocktails for a Crowd includes all the missing info, plus more than 40 batch cocktail and punch recipes, most of which are far easier to put together, but still delicious.
Read more
18 people found this helpful
Report abuse