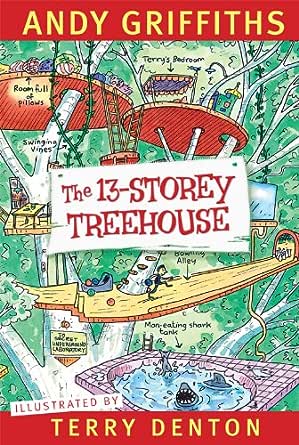 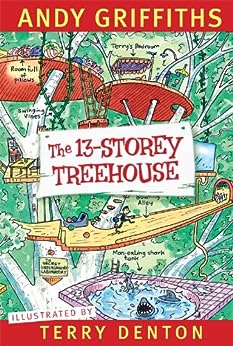 Andy and Terry live in a 13-storey treehouse. They've also got a new book to write, but there's a problem. A BIG problem. Well, quite a few big problems actually ... --This text refers to the audioCD edition.

Andy Griffiths and Terry Denton are a creative partnership that began with Just Tricking! in 1997 and now extends to seven Just books and more than a million copies sold, the award-winning The Bad Book, the off-the-wall success of The Cat on the Mat is Flat and the bestselling The Very Bad Book. They are now published all over the world including the US where Andy's Bum books have made the New York Times bestseller lists. The hugely popular Treehouse series has blasted its way up the bestselling charts since The 13-Storey Treehouse was published in 2011. --This text refers to an alternate kindle_edition edition.

Andy Griffiths is Terry's best mate. He is also Australia's number one children's author! His books, including his popular Treehouse series, have been hugely successful internationally, winning awards and becoming bestsellers in the UK and the USA as well as in his homeland, Australia. The fourth Treehouse book, The 52-Storey Treehouse, won the Australian Book Industry Awards Book of the Year prize, the first children's book to ever do so. Andy thrives on having an audience: he has worked as a high-school teacher, been the lead singer in a rock band and a stand-up comedian. He is a passionate advocate for literacy, has two daughters and lives in Melbourne, Australia. Terry Denton is Andy's best mate. He is also a bestselling and award-winning writer and illustrator based in Melbourne, Australia. Among other things, he worked on the Horrible Science series for Scholastic UK. He lives by the beach with his wife and three kids. The 13-Storey Treehouse won the Sainsburys Children's Book Award in 2015, the Lancashire Fantastic Book Award in 2016, as well as the 2016 Coventry Inspiration Award. --This text refers to an out of print or unavailable edition of this title.
Read more

4.8 out of 5 stars
4.8 out of 5
508 global ratings
How are ratings calculated?
To calculate the overall star rating and percentage breakdown by star, we don’t use a simple average. Instead, our system considers things like how recent a review is and if the reviewer bought the item on Amazon. It also analyses reviews to verify trustworthiness.

Brent C
5.0 out of 5 stars Bargain price! Great read for a 10 year old
Reviewed in Australia on 6 July 2018
Verified Purchase
For the price $4 was fantastic value! My son loves it. First time he has read anything from the series will definitely be buying the others in time.
Read more
One person found this helpful
Helpful
Comment Report abuse

Bagus
5.0 out of 5 stars Great book for kids
Reviewed in Australia on 18 August 2020
Verified Purchase
My 7 years old boy loves this book because it’s so entertaining and has big imagination and creativity in its story.
Read more
Helpful
Comment Report abuse

Amazon Customer
5.0 out of 5 stars Best book ever
Reviewed in Australia on 27 August 2018
Verified Purchase
I love this book it is soooooo funny I love when terry got the sea mokeys. I rated the book 5 out.of 5 because I loved it.
Read more
One person found this helpful
Helpful
Comment Report abuse

Amazon Customer
5.0 out of 5 stars g book
Reviewed in Australia on 3 July 2019
Verified Purchase
great read one of the best book i read maybe you could make them longer i read it in a day! cool thing by the way and can maybe pop some ideas in minds
Read more
One person found this helpful
Helpful
Comment Report abuse

Amazon Customer
4.0 out of 5 stars Review
Reviewed in Australia on 9 August 2018
Verified Purchase
My g.son aged 9 just discovering kindle loved it, I enjoyed it too
Read more
One person found this helpful
Helpful
Comment Report abuse

Glory
3.0 out of 5 stars Bery easy read
Reviewed in Australia on 26 July 2018
Verified Purchase
This is a good book for a child who isn’t too keen on reading, but I wouldn’t recommend it for a child who is an advanced reader as it is much too simple.
Read more
One person found this helpful
Helpful
Comment Report abuse

Michael Teo
5.0 out of 5 stars No words
Reviewed in Australia on 14 July 2020
Verified Purchase
No Words... can’t believe what I am reading I IS AWESOME. Wow I can’t talk. PS. I’m his Daughter. I...
Read more
Helpful
Comment Report abuse

Ms J D Cranch
5.0 out of 5 stars Funny, witty and excellent pictures
Reviewed in Australia on 21 December 2015
Verified Purchase
Despite being closer to old age than young this book still had me chuckling. Only read it after hearing excellent radio interview with author and well worth it. Will be reading it to future grandchildren.
Read more
One person found this helpful
Helpful
Comment Report abuse
See all reviews

Pu55ycat1
3.0 out of 5 stars Very disjointed to read!
Reviewed in the United Kingdom on 19 March 2019
Verified Purchase
This book is very silly & reads like it was written by a kid with adhd! My daughter quite enjoys it & finds it funny which I guess is the main point but I just find it so disjointed I have no pleasure in reading it to her. I know the point of the story is about 2 guys with rubbish attention span & so the flow of the story reflects that but the story stops & starts so many times I can't concentrate on reading it & it's hard to follow, especially with all the random writing all over the pictures - I had to suggest this is one she reads to herself!
Read more
10 people found this helpful
Report abuse

Slightly Bonkers Mum
5.0 out of 5 stars Simply Brilliant!!
Reviewed in the United Kingdom on 14 March 2018
Verified Purchase
This highly entertaining 'laugh out loud' book is pitched just perfectly for a middle-aged (slightly bonkers) mum, never mind a 7 year old little boy! It is so well worth the money which is always a risk when buying books online. My boy and I are having lots of fun reading it out aloud, and my son enjoys vocalising all the conversations with enthusiasm and expression. The illustrations just add yet another dimension to the thoroughly enjoyable text and it has clinched the deal to get him into independent reading. The use of language is also up to date in today's society to which he relates to, and is age-appropriate. A stroke of genius if I may say so Mr Griffiths! and we will be looking forward to the next book in the series.
Read more
9 people found this helpful
Report abuse

Nicky
5.0 out of 5 stars Very funny books for kids
Reviewed in the United Kingdom on 29 August 2018
Verified Purchase
I got this as my son has read a few other books in this series and has a cd with all the stories on it. He loves these books and this one was not a disappointment, he finds them really funny. I am really pleased as he was quite reluctant to read before he read these and now he is asking for more. I would say these are suitable for around 8-10 years and great for reluctant readers.
Read more
5 people found this helpful
Report abuse

L. Michael
5.0 out of 5 stars Had my daughter in fits of giggles!
Reviewed in the United Kingdom on 24 January 2019
Verified Purchase
I read this book to my daughter, age 7, over the course of 3 nights. She absolutely loved it and it had her in fits of uncontrollable giggles on several occasions. It obviously tapped into her sense of humour (Although I'd like to think some of it was down to my comic timing when delivering the lines...) She loved the extra activities at the back of the book too.
Read more
3 people found this helpful
Report abuse