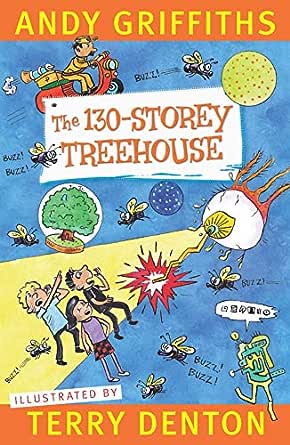 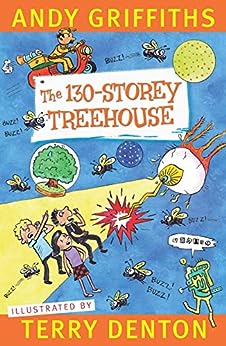 Prepare for more out-of-this-world adventure in Andy and Terry's new 130-storey treehouse! --This text refers to the paperback edition.

Andy Griffiths is one of Australia's most popular children's authors. He and illustrator Terry Denton have collaborated on more than 30 bestselling books since their first title, Just Tricking, was published in 1997.

In Australia Andy and Terry's books have sold over 10 million copies, won 80 children's choice awards and 10 Australian Book Industry Awards-including Book of the Year for The 52-Storey Treehouse in 2015.

Their much-loved Treehouse Series has been embraced by children around the world and is now published in more than 35 countries. Five of the books in the series have been adapted for the stage and have all had sell-out seasons at the Sydney Opera house, as well as highly successful seasons in the Netherlands, New Zealand and America.

Andy is a passionate advocate for literacy and in 2015 was awarded the Dromkeen Medal to honour his outstanding contribution to Australian children's literature. He is also an ambassador for both The Indigenous Literacy Foundation and the Pyjama Foundation.

Terry Denton is a writer and illustrator based in Melbourne, Australia. His work is mainly humour-based cartoon style.


Terry Denton has illustrated bestsellers such as the JUST! series and the Treehouse series by Andy Griffiths. He has three children and is the owner of a back garden burial ground for dead pets.

If you close your eyes and listen hard enough, you can hear the sound of children everywhere lamenting the long 12 months they have to wait until the release of the next one. * Guardian * Fizzing prose and fantastic, cartoon-style illustrations ensure the pace never drops for a moment throughout this laugh-out-loud story * First News * A perfect book for ... Roald Dahl fans * The Week Junior * Packed with the sort of zany humour that children can't resist. * Parents in Touch * Easy-to-read, visually exciting and wonderfully entertaining, the pace is fast and the fun never stops. Simply brilliant and guaranteed to get even the most reluctant readers begging for more! * Lancashire Evening Post * Brilliant series and if you haven't read them yet why not? Start at the beginning and work through them all. Laugh out loud funny and I love reading about all the things they have in their treehouse -- Toppsta Reviewer * Toppsta * The kind of book I would have loved as a kid -- Tom Fletcher, on 39-Storey Treehouse --This text refers to an out of print or unavailable edition of this title.
Read more