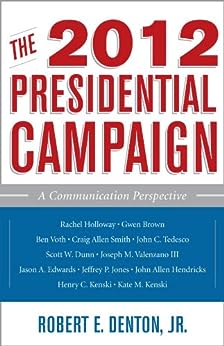 By any measure the 2012 Presidential campaign was bound to be an unusual national spectacle. An African American President presiding over a struggling economy was vulnerable. The GOP foundered early in uncharacteristic disarray. And the interests of voters usually thought to be on the margins of the electorate--African Americans, Latinos, and younger women--would eventually converge to give Barack Obama a comfortable victory. Critical assessments of national campaigns always benefit from multiple voices and perspectives. In this perceptive collection, Robert E. Denton Jr. presides over a penetrating and original examination of these and other forces using his own slate of seasoned political scholars. The nine essays in The 2012 Presidential Campaign: A Communication Perspective match the readability of conventional journalistic narratives, but easily surpass them in providing critical insights on a host of presentational variables: the drama of the presidential debates, the surrogacy of the candidates' spouses, social media magnifying various triumphs and gaffs, advertising offensives in a handful of states, and fateful rhetorical choices made by each side in the run-up to November 6th. Few accounts of the 2012 campaign have been so detailed and thorough in assessing the candidates' messages.--Gary C. Woodward, The College of New Jersey

In his preface to The 2012 Presidential Campaign, Robert E. Denton reflects that he has edited a book on the presidential election for every campaign dating back to 1992. Each of these elections, he argues, was both unique and very much the same as preceding contests. The chapters selected for the 2012 iteration reflect that dialectic--the contributors both explore subject matter that is particular to this cycle and place the election in appropriate historical context. Some of the chapters are exemplary, most are useful, and as a collection the edited volume holds up nicely alongside its predecessors in Denton's series.--Presidential Studies Quarterly

Robert Denton has once again brought together a team of political communication scholars who apply a wide range of theories and methods to analyzing a presidential campaign. From traditional speeches by candidates and their wives to twitter reactions from citizens, every type of campaign communication is explored. Denton's observation in his introduction that the more presidential campaign communication changes, the more it remains the same is evident throughout each chapter's analysis. The need for apologia, the dominance of the American Dream in presidential rhetoric, complaints about debate formats and their limitations--both old and new--or increased reliance on negative advertising are not new themes in analyzing these quadrennial events. However, the authors demonstrate that context matters and that each plays out in some unique way in 2012.--Diana B. Carlin, Saint Louis University, Professor Emerita

This is a comprehensive analysis of Campaign 2012, from the growing political role of candidates' wives, to the dysfunctional presidential debates, to Romney's rhetorically challenged response to attacks, to the increasingly sophisticated use of social media. The volume is important reading for anyone who wants to stay current in presidential campaign communication.--John H. Parmalee, professor and Chair, Department of Communication, University of North Florida, and author of Politics and the Twitter Revolution --This text refers to an out of print or unavailable edition of this title.

Robert E. Denton, Jr. holds the W. Thomas Rice Chair of Leadership Studies in the Pamplin College of Business and serves as head of the Department of Communication at Virginia Tech. --This text refers to an out of print or unavailable edition of this title.