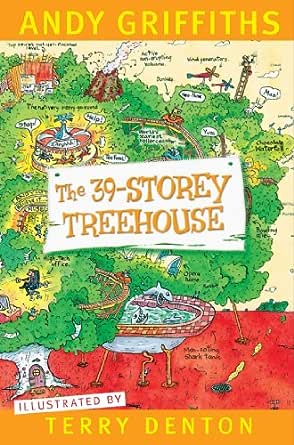 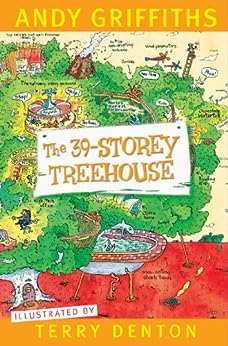 Andy Griffiths and Terry Denton are a creative partnership that began with 'Just Tricking!' in 1997 and now extends to eight "Just" books and more than a million copies sold, the ground-breaking 'The Bad Book', the off-the-wall success of 'The Cat on the Mat is Flat', the "Bum" trilogy (which made the "New York Times" bestseller list), the bestselling 'The Very Bad Book' and now the treehouse series. Andy and Terry have won numerous kids choice awards and many of their titles are nominated every year. In 2012, 'The 13-Storey Treehouse' won the ABIA award for older readers. --This text refers to an alternate kindle_edition edition.

Praise for The 26-Story Treehouse:

"Wildly humorous without being smart-alecky or sarcastic, this is a top choice for middle-grade readers." —School Library Journal

"This zany sequel, as much cartoon illustration as text, is an almost nonstop adventure involving self-inflating underpants, fish with bad breath, sharks with zippered bellies, 78 flavors of ice cream, and several disasters, before its explosive finish. Mr. Big Nose, the publisher, is impatient for more. Can the 52-story model be far behind?" —Booklist

"Twice the treehouse, twice the fun? You bet. Griffiths and Denton follow the uproarious The 13-Story Treehouse with another cartoon-laden carnival of slapstick and self-referential humor—this time, with pirates….Whether it's Jill and her menagerie of animals stacked precariously on a tiny iceberg or a giant, smelly fish head orbiting the Earth (it's an important plot point), Denton's furiously scrawled line drawings milk the silly, gross-out gags for everything they're worth. Kids should be flipping pages faster than a pair of inflatable underpants can skyrocket the young heroes to safety (it's also an important plot point). Best of all, Terry and Andy leave readers with a blueprint for a 39-story sequel." —Publishers Weekly, starred review

Praise for The 13-Story Treehouse:

"A series starter that will appeal to fans of Jeff Kinney and Dav Pilkey . . . A treat for all . . . And guess what? It makes for good tree house reading." —Booklist

"Fans of Jeff Kinney's Diary of a Wimpy Kid and Lincoln Peirce's Big Nate series will be drawn to this book, while parents will enjoy the absence of snarky humor." —School Library Journal

"Longtime collaborators Griffiths and Denton (Killer Koalas from Outer Space) get metafictional in their latest book (first published in Australia), and the result is anarchic absurdity at its best. Young buddies Andy and Terry live together in the sort of tree house that kids dream about, complete with bowling alley, shark tank, vines to swing from, and underground laboratory." —Publishers Weekly, starred review
"Boys in particular will like the burping contests, gross creatures, and ridiculous choices that Terry and Andy make throughout the book. And as if killer mermaids are not enough, there are sea monkeys. And a giant gorilla. And a giant banana. And the return of the catnary. See? Silly, ridiculous fun. Kids will love it." —Kris Sauer, Children's Literature

'A potent mix of fantasy, nonsense, adventure and cartoons, this series is catnip to every eight-year-old who encounters it.' (The Bookseller) --This text refers to an alternate kindle_edition edition.

Andy Griffiths is the "New York Times" bestselling author of "The Day My Butt Went Psycho!", "Zombie Butts from Uranus!", and "Butt Wars! The Final Conflict", as well as "The Big Fat Cow That Goes Kapow" and "The Cat on the Mat Is Flat". In 2007, he became the first Australian author to win six children s choice awards in one year for "Just Shocking!" He is passionate about inspiring a love of books in his young readers, and works as an ambassador for the Indigenous Literacy Project, which provides books and literacy resources to remote indigenous communities around Australia. Andy is a big fan of Dr. Seuss and of cauliflower. He lives in Melbourne, Australia, and is Australia s most popular children s writer.

Terry Denton is known for his humorous illustration style and has worked with Andy on the JUST! books among others. He lives by the sea in Australia with his wife, three kids, and a pop-up toaster that only toasts on one side.

Stig Wemyss is an actor, writer and the voice behind millions of children s audio books. Well, not millions. Thousands Alright, more like hundreds He has a huge fan club. Bolinda Audio is constantly receiving letters from kids saying things like Stig Rocks and I love Stig and Stig Wemyss is the best narrator in the world . Of course we don t show Stig all these letters, as he already thinks he s the best narrator in the universe! Now that he is also the author of an exciting in-car audio entertainment series, The Tripp Diaries, he thinks he s the best narrator and the best author in the universe. We think he is too, but let s just keep that to ourselves! --This text refers to an out of print or unavailable edition of this title.

'A potent mix of fantasy, nonsense, adventure and cartoons, this series is catnip to every eight-year-old who encounters it.' -- The Bookseller --This text refers to the audioCD edition.

The third-instalment in the multiple award-winning Treehouse series. --This text refers to the audioCD edition.
Read more

4.8 out of 5 stars
4.8 out of 5
359 global ratings
How are ratings calculated?
To calculate the overall star rating and percentage breakdown by star, we don’t use a simple average. Instead, our system considers things like how recent a review is and if the reviewer bought the item on Amazon. It also analyses reviews to verify trustworthiness.

Liz Rourke
5.0 out of 5 stars love you Andy Griffith!
Reviewed in Australia on 2 May 2016
Verified Purchase
loved it, awesome, excellent and more awesome! PS. i know i said awesome two times! PPS. and there's another one! PPPs. i i also love you Terry Denton
Read more
Helpful
Comment Report abuse

Finn Alan Bradfield
5.0 out of 5 stars 39 story treehouse
Reviewed in Australia on 1 December 2015
Verified Purchase
i thought this book was hilariously funny and awesomely awesome!!!p.s.i thought would like to bounce on that trampoline!!!!i wouldn't like to go head to trunk with the trunkinator though!!!
Read more
Helpful
Comment Report abuse

Justin
4.0 out of 5 stars Good book
Reviewed in Australia on 15 April 2014
Verified Purchase
It was a very funny book and some bits are quite strange and weird. But still it is a very enjoyable book but is meant for young kids who like strange stuff and I don't really recomend it to adults.
Read more
Helpful
Comment Report abuse

Gregorian Bato
TOP 500 REVIEWER
5.0 out of 5 stars Son finished in 1 day
Reviewed in Australia on 11 July 2019
8 Year old son loved this book he finished it in one day. Then I had to purchase the rest of them...
Read more
Helpful
Comment Report abuse

Aijaz Wani
5.0 out of 5 stars hewoo !
Reviewed in Australia on 15 June 2020
This book is really funny and is a great read ,but it could be cheaper. my instGram is XxsunflowerxX_hai my tiktok is @eramm_random i love roblox! :)
Read more
Helpful
Comment Report abuse

clancy hartman
5.0 out of 5 stars 39 story tree house
Reviewed in Australia on 13 September 2014
39 story tree house is the best book ever. I think Andy is epic at writting and Terrys epic at drawring. I love all the books they make. It is a little bit strange but otherewise epic.
Read more
Helpful
Comment Report abuse

Isaac Brighton
5.0 out of 5 stars The 39 storey treehouse
Reviewed in Australia on 5 July 2014
The 39 storey treehouse is a great storey for all the family. It is funny and exciting at different parts of the book. You're sure to read this more than once!
Read more
Helpful
Comment Report abuse
See all reviews

The Quine
5.0 out of 5 stars This book is just what the teacher ordered for a reluctant reader.
Reviewed in the United Kingdom on 3 January 2020
Verified Purchase
Gift to grandchild who thinks it's wonderful. He was a reluctant reader and books like this have made him an excellent reader. It's just what the teacher ordered. He always has a bookin his hands now. Fantastic.
Read more
2 people found this helpful
Report abuse

Godders45
5.0 out of 5 stars Loved by 10 year old girl
Reviewed in the United Kingdom on 1 November 2018
Verified Purchase
My daughter is avidly reading the Treehouse books. I wasn't sure if they would be her thing, but knowing how she enjoyed the Tom Gates books, thought it worth a shot. It was. She reads around 1 every 2-3 days! She enjoys telling me about the crazy things that happen and is often laughing to herself when doing so. Worth every penny.
Read more
2 people found this helpful
Report abuse

Amazon Customer
5.0 out of 5 stars Five year old loves it
Reviewed in the United Kingdom on 26 August 2018
Verified Purchase
My son loves these books and the antics of Andy and Terry get lots of giggles from us grown ups as well. My son has just finished reception class and these books are ideal for those looking to make the transition from picture books to chapter books as they have comics interspersed with text.
Read more
2 people found this helpful
Report abuse

Happy Reader
5.0 out of 5 stars Great series!
Reviewed in the United Kingdom on 27 November 2018
Verified Purchase
My 8 year old grandson loves these books and ploughed through the series without stopping. Highly recommend.
Read more
2 people found this helpful
Report abuse
See all reviews
Get FREE delivery with Amazon Prime
Prime members enjoy FREE Delivery and exclusive access to movies, TV shows, music, Kindle e-books, Twitch Prime, and more.
> Get Started
Back to top
Get to Know Us
Make Money with Us
Let Us Help You
And don't forget:
© 1996-2020, Amazon.com, Inc. or its affiliates