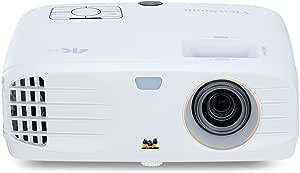 Brand: ViewSonic
4.3 out of 5 stars 510 ratings
Secure transaction
Returns Policy
Your transaction is secure
We work hard to protect your security and privacy. Our payment security system encrypts your information during transmission. We don’t share your credit card details with third-party sellers, and we don’t sell your information to others. Learn more
Available from these sellers.

4K all day. With incredible Ultra HD resolution and a High brightness of 3, 500 lumens, the view Sonic PX747-4K projector delivers stunning home entertainment around the clock: day or night, in bright rooms or dark. Featuring HDR compatibility, exclusive Super Color technology, and true Ultra HD 3840X2160P resolution, The PX747-4K delivers a breathtaking home cinema experience you expect to only get at the movie theater. With high brightness and room-filling sound, this projector provides bright visuals and immersive audio in nearly any room or environment. What’s more, An energy-saving Super Eco feature reduces power consumption and extends the lamp life by up to 15, 000 hours. Set-up is a breeze too: 1.2x optical zoom and versatile connectivity options allow for more flexible mounting and easy installation. For an amazing home theater viewing experience with lifelike color and razor-sharp details, The PX747-4K delivers. Lamp life may vary based on actual usage and other factors.

4.3 out of 5 stars
4.3 out of 5
510 global ratings
How are ratings calculated?
To calculate the overall star rating and percentage breakdown by star, we don’t use a simple average. Instead, our system considers things like how recent a review is and if the reviewer bought the item on Amazon. It also analyses reviews to verify trustworthiness.

jimbob1990
2.0 out of 5 stars Thought this was great but then I tried playing 4K
Reviewed in the United Kingdom on 2 December 2018
Verified Purchase
I have tested this out on a large white wall in my living room, and have watched about 20 hours of content at the time of writing this review so I feel I have gotten quite familiar with this projector.

Firstly, this provides an excellent picture quality for less than half the price of comparable competitors. The picture is seriously bright. The only time it struggled was in strong sunlight, and the blacks became a bit washed out. In a dark room the brightness lights up the entire room even at around 30% brightness. The details are great, and there is no noticeable lag. I noticed rainbowing in only two scenes throughout the 20 hours of watching.

Even when watching standard definition content, the device does an exceptional job if not looking soft or pixelated.

It is easy to adjust the size of the throw, and the angle of the device. Focusing is simple and smooth. The only adjustment issue was when standing on a flat surface - there are adjustable feet on the bottom that in theory allow you to angle the projector, but these are oddly placed and only on three corners, not four, which means you have to prop up the projector when it tips to the side.

There are two negatives I can think of, and these are more in relation to using projectors instead of TVs in general, and not specifically to this model. Just thought I should mention it as they are the most obvious issues to me.

One, the sound quality is way off what you would be used to with a regular TV. Even comparing to my 10 year old Samsung TV, the sound is tinny. You also need to consider that the sound comes from the projector unit, which is behind you, whilst the picture is in front of you. This is an odd experience. Basically, be prepared to add a decent set of speakers to your budget, and figure out how you are going to wire them.

Two, this thing gets hot, which means it gets loud. The cooling fan is constantly on, and whilst it is nice that it doesn't speed up and slow down like on other models which sound like traffic noise, it takes some getting used to. I would be inclined to investigate whether there is a way to exchange the fan for a more silent PC fan that doesn't whir like a hairdryer.

EDIT:
Updating my review after trying to replace my TV with this unit full time. Gone from 5 to 2 stars. The deal breaker? You can't play 4K content from a Fire TV stick. It just says that the projector doesn't support 4K. Have seen a few other people mention the same and see no workaround. No point in using this as a daily device if it doesn't support 4K.
Read more
38 people found this helpful
Report abuse

All things tech
4.0 out of 5 stars It's very good but not true 4K
Reviewed in the United Kingdom on 18 April 2019
Verified Purchase
This '4K' projector uses pixel shifting technology to effectively split the pixels and then send them again giving more than 8 million pixels which is why they are advertised as 4k.

It is not and neither are any of the other projectors under a few thousand pounds true 4k. Saying that this projector being one of the cheapest and brightest is probably the best of that bunch. It certainly produces a far better image than 1080P which can cost nearly as much.

This projector is also smaller than a lot of the other 4K projectors which if used in a dual purpose room like a lounge may be preferred by those not wanting a huge box on the ceiling or wall, its much more conspicuous as is the colour, being white it seems to blend in more.

Another feature that other projectors can suffer from are fan noise levels, this view sonic never seems to reach a noticeable level intact you barely notice it even when trying to listen.

People wanting to use this in rooms with a lot of light will also be happy, the great lumens and contrast ration ensure a vivid bright image at all times - although it really comes into its own at night, this is when the picture pops and looks great!

This will be the choice for people wanting a 4k projector on a budget, but if you really want the very best, then you probably need to spend about 5 times as much. If you are comparing to projectors at double the price than i'd recommend saving the cash and buying the view sonic as those projectors are definitely not twice as good!
Read more
32 people found this helpful
Report abuse

Harry T H
5.0 out of 5 stars Great 4K Projector
Reviewed in the United Kingdom on 30 July 2018
Verified Purchase
Pure quality for money. I’ve had Optoma and Benq projectors before and was a little hesitant buying this Viewsonic for first time, but a 4K projector for a grand had to be seriously considered. It’s streets ahead of what I expected. The performance through my SkyQ box in UHD is simply stunning. It’s quieter than units I’ve used before and the colours are really beautiful. I also use via my Sony 4K player and again the movies are just stunning, I genuinely see the improvement over HD, which was something I was concerned about with a 4K projector. For the money, this is just an absolute bargain.
Read more
31 people found this helpful
Report abuse

I.alexander
5.0 out of 5 stars Great projector
Reviewed in the United Kingdom on 15 November 2019
Verified Purchase
Having read some of the reviews on here saying it doesn't support 4k and it's noisy I have to wonder if we are using the same projector. My projector is very quiet I barely notice it and it supports all the 4k content I have thrown at it. I am currently using nvidia shield tv to run YouTube and Netflix and Amazon prime and it runs them all fabulously in 4k. The picture quality is stunning and I just purchased a 4k blu-ray player and that looks amazing. This is a great projector at a good price and I have absolutely no regrets with my purchase.
Read more

5.0 out of 5 stars Great projector
Reviewed in the United Kingdom on 15 November 2019
Having read some of the reviews on here saying it doesn't support 4k and it's noisy I have to wonder if we are using the same projector. My projector is very quiet I barely notice it and it supports all the 4k content I have thrown at it. I am currently using nvidia shield tv to run YouTube and Netflix and Amazon prime and it runs them all fabulously in 4k. The picture quality is stunning and I just purchased a 4k blu-ray player and that looks amazing. This is a great projector at a good price and I have absolutely no regrets with my purchase.
Images in this review

Read more
41 people found this helpful
Report abuse
Translate review to English
See all reviews
Get FREE delivery with Amazon Prime
Prime members enjoy FREE Delivery and exclusive access to movies, TV shows, music, Kindle e-books, Twitch Prime, and more.
> Get Started
Back to top
Get to Know Us
Make Money with Us
Let Us Help You
And don't forget:
© 1996-2020, Amazon.com, Inc. or its affiliates