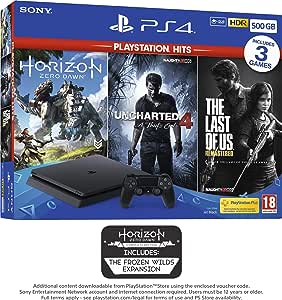 Brand: Playstation
Platform : PlayStation 4
4.8 out of 5 stars 1,890 ratings
Currently unavailable.
We don't know when or if this item will be back in stock.

This great-value bundle includes a Jet Black 500GB PlayStation 4 console, a matching Jet Black dualshock 4 wireless controller and three huge critically acclaimed games; Horizon Zero Dawn complete Edition a thousand years from now. Machines roam the land and mankind is no longer the dominant species. A young Hunter embarks on a journey to discover her destiny. This complete Edition includes the huge expansion the frozen wilds*, featuring new lands, skills, weapons and machines; Uncharted 4: A Thief's End Nathan Drake heads out on a globetrotting adventure across bustling cities and lush jungles in search of untold treasures and a legendary utopia; the last of us remastered in a hostile, post-pandemic world, Joel and Ellie must rely on each other to survive a brutal journey across what remains of the USA; PlayStation 4 is the best place to play over 90 million fans, players and families are enjoying epic gaming and entertainment experiences with the world's bestselling console. Begin a whole new adventure today on PS4, with non-stop Entertainment, unmissable exclusive games and comprehensive Parental controls to oversee the content children can access online.

4.8 out of 5 stars
4.8 out of 5
1,890 global ratings
How are ratings calculated?
To calculate the overall star rating and percentage breakdown by star, we don’t use a simple average. Instead, our system considers things like how recent a review is and if the reviewer bought the item on Amazon. It also analyses reviews to verify trustworthiness.

iiElysiumx
4.0 out of 5 stars Great console
Reviewed in the United Kingdom on 23 September 2019
Edition: 500GB HITS Triple PackConfiguration: No additional itemsVerified Purchase
My girlfriend and I recently bought this as a media machine for the TV and to play the PlayStation exclusives and we are pleased, now I am a PC gamer who also owns an Xbox one X, a Nintendo switch and an N64 and by comparison, the PS4 slim is pretty good.

The design, its very small and light which is great. means in my small student room I can stuff it behind my TV and forget it is even there, the slanted design while being cool and all can be inconvenient when trying to plug something in like an ethernet cable it can be a pain to find where the port is. Also, the disk tray feels cheap, really cheap, it's loud and does not support Blu Ray, which I don't really care about but it warrants a mention.

Games played great, especially streaming game (which I will talk about in a bit) most game run at around 900p at about 30-45FPS with some lighter games like fortnite running at 1080p at 60FPS, which compared to the Xbox one S is great, if you care about frame rates and resolutions but are on a tight budget I would buy this over the one S any day. Game streaming is also nice but if you do not have a fast internet connection the games can look and run like crap, but if you have the connection then you can play some fantastic games for only a few pounds a month, games like Fallout 4, the last of us, uncharted and many more, which again, if you are on a tight budget is perfect! the HDR support is also a nice touch if you have a display that supports it and adds a bit more graphical fidelity to your games which is always appreciated. however compared to a one X it lacks some of the fancier features like 12 bit color, 4k at 60FPS and Dolby atmos and visual support, however, if you are looking at this for your main console you likely do not have the gear to run any of those features anyway.

I would say this is the best console at this price point right now, better than the Xbox One S as it plays games in higher resolutions at higher frame rates and allows you to stream games on PlayStation Now. there is also a bundle that gives you the last of us remastered, Uncharted and horizon zero dawn with the console for basically free, so you get 3 fantastic PlayStation exclusives right out of the box with access to many more on PlayStation now. in my opinion its worth a buy over the Xbox one S but if you are looking at the PS4 Pro then get the Xbox one X as at that price point, the One X is the superior console
Read more
51 people found this helpful
Report abuse

Amazon Customer
5.0 out of 5 stars Great Deal
Reviewed in the United Kingdom on 26 July 2019
Edition: 500GB HITS Triple PackConfiguration: No additional itemsVerified Purchase
Exactly as described, brand new and works great. For anyone wondering (as I did), the games are proper disks not just downloads.
Read more
39 people found this helpful
Report abuse

S.S. Bhatti
5.0 out of 5 stars You get 3 of the best exclusive games only on ps4
Reviewed in the United Kingdom on 21 July 2019
Edition: 500GB HITS Triple PackConfiguration: No additional itemsVerified Purchase
I have been waiting to get a PS4 for a long time, and thought that this is a good time to buy, since there are just so many great exclusives available for Sony's console. It came brand new and only took a day to arrive, very pleased with my purchase and would recommend to anyone who has not yet got a PS4, and wants to play three of the greatest titles on the console.
Read more
28 people found this helpful
Report abuse

James B. Spink
5.0 out of 5 stars A great-value package to keep you entertained at home until you can go out again!
Reviewed in the United Kingdom on 31 March 2020
Edition: 500GB HITS Triple PackConfiguration: No additional itemsVerified Purchase
A lot of us are suddenly finding ourselves at home with an unexpected amount of time on our hands – a fun way to entertain yourself could be with this great-value PS4 bundle from Amazon. For around two hundred and fifty quid currently, you get a slim Jet Black 500GB PlayStation 4 console plus a single Jet Black DualShock 4 wireless controller and three games discs. The games included here are Horizon Zero Dawn (Complete Edition), Uncharted 4 (a Thief's End) & The Last of Us (Remastered) – all great fun and hours of game-play to keep you occupied until you can go out again. If you don't already own a PS4 and don't want to wait for the PS5 then this package from Amazon is one of the best PS4 deals currently available – five stars for what you get for the price.
Read more
19 people found this helpful
Report abuse

Bobby Dazzler
5.0 out of 5 stars Excellent value.
Reviewed in the United Kingdom on 7 February 2020
Edition: 500GB HITS Triple PackConfiguration: No additional itemsVerified Purchase
Comes with 3 shrink-wrapped games which I would have bought anyway. My infamous review about the mini PlayStation classic may have put people off buying it (rightly so in my opinion, which is what a review is isn't it..?), but Sony have absolutely nailed this console. I'm a late comer to the PS4 party and as such been blessed with a quiet, compact version of the launch model and I get 3 highly rated games too. As an ageing gamer of many decades I am staggered how much performance is in such a small unit and how quiet it is. I've had an XBox One S and this is smaller and lighter. There are more exclusives too, which is why I sold my XBox. I have a slight preference for the XBox controller but this one doesn't require new batteries as the controller has a rechargeable one built in.
Read more
15 people found this helpful
Report abuse
See all reviews
Get FREE delivery with Amazon Prime
Prime members enjoy FREE Delivery and exclusive access to movies, TV shows, music, Kindle e-books, Twitch Prime, and more.
> Get Started
Back to top
Get to Know Us
Make Money with Us
Let Us Help You
And don't forget:
© 1996-2020, Amazon.com, Inc. or its affiliates