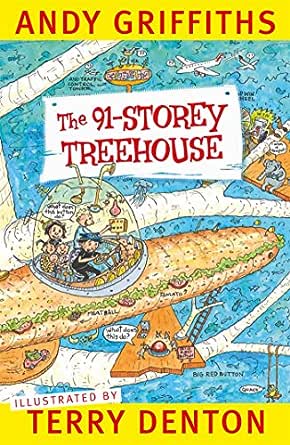 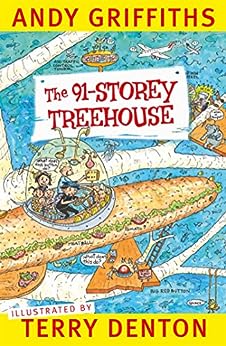 'A potent mix of fantasy, nonsense, adventure and cartoons, this series is catnip to every eight-year-old who encounters it.' -- The Bookseller --This text refers to an alternate kindle_edition edition.

Andy Griffiths and Terry Denton began their creative partnership with Just Tricking! in 1997. They have now collaborated on eight Just books (with more than a million copies sold), the ground-breaking The Bad Book, the off-the-wall The Cat on the Mat is Flat), and now the phenomenal, sales-record-smashing, award winning Treehouse series. Andy and Terry have won numerous kids choice awards and many of their titles are nominated every year. --This text refers to an alternate kindle_edition edition.

A zany Treehouse diary to accompany the latest book in the bestselling Treehouse series. --This text refers to the hardcover edition.

'A potent mix of fantasy, nonsense, adventure and cartoons, this series is catnip to every eight-year-old who encounters it.' (The Bookseller) --This text refers to an alternate kindle_edition edition.

Andy Griffiths is one of Australia's most popular children's authors. He and illustrator Terry Denton have collaborated on more than 30 bestselling books since their first title, Just Tricking, was published in 1997.

In Australia Andy and Terry's books have sold over 10 million copies, won 80 children's choice awards and 10 Australian Book Industry Awards-including Book of the Year for The 52-Storey Treehouse in 2015.

Their much-loved Treehouse Series has been embraced by children around the world and is now published in more than 35 countries. Five of the books in the series have been adapted for the stage and have all had sell-out seasons at the Sydney Opera house, as well as highly successful seasons in the Netherlands, New Zealand and America.

Andy is a passionate advocate for literacy and in 2015 was awarded the Dromkeen Medal to honour his outstanding contribution to Australian children's literature. He is also an ambassador for both The Indigenous Literacy Foundation and the Pyjama Foundation.

Andy Griffiths is one of the most popular children's authors in Australia. He has written more than 25 books, including nonsense verse, short stories, comic novels and plays. His books have been New York Timesbestsellers, won more than 50 children's choice awards, been adapted as a television cartoon series and sold more than five million copies worldwide. He is best known as the author of the JUST! series, The Day My Bum Went Psycho and the bestselling Treehouse series.

In 2008 Andy became the first Australian author to win six children's choice awards in one year for Just Shocking.

In 2008 Andy and his wife Jill collaborated with The Bell Shakespeare Company on the popular and critically acclaimed theatrical production 'Just Macbeth!' which was nominated for two Helpmann Awards. In July 2010 'Just Macbeth!' completed a return sold-out season at the Sydney Opera House before heading to the Edinburgh Fringe Festival. The book of the play was shortlisted for the 2010 Prime Minister's Literary Awards.

Andy has had a long-standing collaboration with the multi-talented illustrator Terry Denton. Readers who want to sneak behind the scenes to see Andy and Terry's creative partnership can dive into Once Upon A Slime. This book aims to ignite the writer inside by offering story ideas and zany activities.

Andy is an ambassador for The Indigenous Literacy Foundation and the Pyjama Foundation, and was awarded the Dromkeen Medal in 2015 to honour his outstanding contribution to Australian children's literature
Terry Denton is a writer and illustrator based in Melbourne, Australia. His work is mainly humour-based cartoon style.

Terry Denton has illustrated bestsellers such as the JUST! series and the Treehouse series. He has three children and is the owner of a back garden burial ground for dead pets.

Terry Denton is a writer and illustrator based in Melbourne, Australia. His work is mainly humour-based cartoon style.


Terry Denton has illustrated bestsellers such as the JUST! series and the Treehouse series by Andy Griffiths. He has three children and is the owner of a back garden burial ground for dead pets.

4.8 out of 5 stars
4.8 out of 5
373 global ratings
How are ratings calculated?
To calculate the overall star rating and percentage breakdown by star, we don’t use a simple average. Instead, our system considers things like how recent a review is and if the reviewer bought the item on Amazon. It also analyses reviews to verify trustworthiness.

Snapped Fireblade
4.0 out of 5 stars ,lol
Reviewed in Australia on 1 February 2018
Verified Purchase
Its a pretty good book but it sometimes gets really quick and SUDDEN. I think Andy and Terry are running out of ideas. I finished this book in about 1-2 hours, so for a book with a lot of pictures, it is pretty short. The whole story would be best described as RANDOM.
I hope Andy and Terry will make the next book a lot more descriptive, not just by using the pictures and make it more action-packed but not too SUDDEN. By simple descriping the characters, setting, objects etc. will make the books longer. Maybe
Write the book first like its a comedy book without pictures, then add in the pictures after you finished writing. It would make it more descriptive and with the lpicture added on, it would be perfect.
I would've rated 4.5 stars but its only intergers for rating on kindle lol
Over all pretty good book. I am looking forward to the next one.

Kindle Customer
3.0 out of 5 stars good but jumbled!!
Reviewed in Australia on 11 September 2019
Verified Purchase
i think it was a great book but it was very,very,very,very(finally)jumbled...
everything was all over the place so i couldnt raeally understand it. but it was still an awesome book so i recomend all ages to read it!!!!!!!

Amazon Customer
4.0 out of 5 stars it was ridiculous
Reviewed in Australia on 10 August 2017
Verified Purchase
I think it is confusing when madam-know-it-all drains memory from Andy and Terry's brains and then Mr big nose's nose grows so big it explodes killing madam-know-it-all and knocks Andy, Terry and Jill off a ledge. When tbey press the big red button, rainbows come out of their noses and the trunkinater's nose rainbow allowed Andy and Terry to slide over to Mr Big Nose's office to deliver the book.
Read more
Helpful
Comment Report abuse

Happy Reader
5.0 out of 5 stars :-)
Reviewed in Australia on 8 September 2017
Verified Purchase
This Book was really cool and it only took me about 4 days to read it (4 nights) I cant wait for the 104 storey treehouse book to be published lol woot woot `\'-'/`
Read more
2 people found this helpful
Helpful
Comment Report abuse

Amazon Customer
5.0 out of 5 stars yayyyyyyyyyyy
Reviewed in Australia on 29 August 2017
Verified Purchase
dis book is finaly out dis book was very good i like dis book dis book vewy clever dis one of my favorite books so i give dis book a good review
Read more
One person found this helpful
Helpful
Comment Report abuse
See all reviews

All Things Blue
5.0 out of 5 stars Multi "Storeys" Means Plenty of Peace and Quiet
Reviewed in the United Kingdom on 14 January 2018
Verified Purchase
Arrived quick in mint condition. My 9 year old daughter has read the whole series and adores them. Keeps her off her gadgets so we're happy too :-) NB If you want to catch up then there are sellers doing "bundles" of the first 6 books which works out a lot cheaper.
Read more
4 people found this helpful
Report abuse

Susan
3.0 out of 5 stars Recommended for a seven year old
Reviewed in the United Kingdom on 14 January 2018
Verified Purchase
Written by Finlay, Age 10
It was a good book but there wasn't a lot of action. It was quite funny but there wasn't a lot of words. It was more of a picture book than a chapter book. I would recommend it to a seven year old.

Rachel
5.0 out of 5 stars Best set of children's books for reluctant readers
Reviewed in the United Kingdom on 3 October 2018
Verified Purchase
This set of books made my 6-year old son a reader! He devoured each and every one of them. They are funny, imaginative, a great balance of words and pictures and my son absolutely adores them all.
Read more
One person found this helpful
Report abuse
See all reviews
Get FREE delivery with Amazon Prime
Prime members enjoy FREE Delivery and exclusive access to movies, TV shows, music, Kindle e-books, Twitch Prime, and more.
> Get Started
Back to top
Get to Know Us
Make Money with Us
Let Us Help You
And don't forget:
© 1996-2020, Amazon.com, Inc. or its affiliates