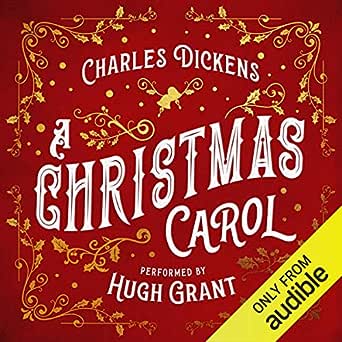 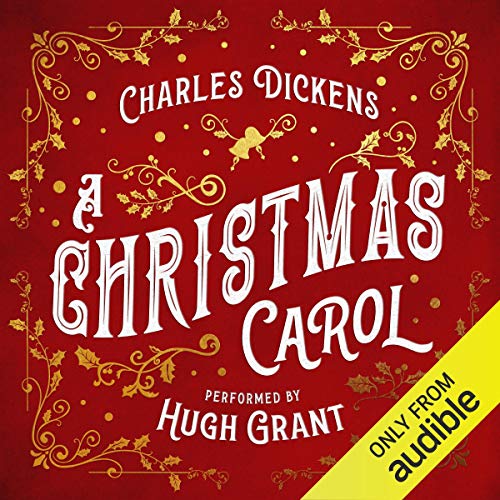 4.3 out of 5 stars
4.3 out of 5
349 global ratings
How are ratings calculated?
To calculate the overall star rating and percentage breakdown by star, we don’t use a simple average. Instead, our system considers things like how recent a review is and if the reviewer bought the item on Amazon. It also analyses reviews to verify trustworthiness.

Aussielee
TOP 1000 REVIEWER
5.0 out of 5 stars Classic with a Hugh Grant factor
Reviewed in Australia on 13 January 2021
We all know the plot to A Christmas Carol. The book has been adapted and borrowed from so many times, it would be impossible to not know about Ebenezer Scrooge and Tiny Tim etc. I had, therefore, never really been tempted to read the book. However, when Audible gifted its members a version narrated by Hugh Grant, I gave it a go. After all, Hugh Grant…

We all know Dickens is considered a literary great and even without taking any of his other books into account, it’s easy to discern why from A Christmas Carol.

I guess some parts of the plot were disappointing, but it's not Dickens's fault. It was just because it is too well known. There were no shocks or twists and I knew Scrooge would see the light and find a heart and lose his bah humbug ways. But if I had looked at the plot alone with complete innocence, it’s really very clever. It’s got touches of a thriller, with ghosts rattling their chains, I imagine in 1843 it might have almost been a little scary. It has humour, my favourite part being Scrooge wondering if those same ghosts were caused by indigestion. It covers a plethora of themes, the importance of family and love, forgiveness and redemption, and of course, social inequality. It’s also got a bit of tension towards the end, with Scrooge not sure as to whether or not he can change the course of his future. You’ve got to admit, that’s a lot to pack into a mere 112 pages.

Then there is the characterisation in 112 pages. We get Scrooge’s impatience and miserly ways within a couple of paragraphs. He and the other characters, even his already dead partner Marlowe, jump from the page and are so easy to imagine immediately (enough to even eclipse the various movie versions which might be stuck in your head).

Dickens’s prose is obviously also very good. His descriptive passages are a marvel. I could have read (listened, anyway) to some of them over and over. I also found it surprising how easy Dickens’s writing was to read. Usually reading something from 1843, you might expect some turns of phrases etc to be confusing, but I never had to pause and wonder what he meant at any stage. Obviously this is another sign of Dickens’s literary skill.

As for Hugh’s narration? Let me just put it this way - I’m off to check if he’s narrated any other books, so that’s a big ‘yes’ from me (and maybe a little ‘guh’ and ‘yeah, bb’).

KG
1.0 out of 5 stars Awful
Reviewed in the United Kingdom on 12 December 2020
Verified Purchase
I was persuaded to buy this version by its availability and the attractive cover. Nothing else about this version, that I assume to be self-published, is attractive. Charles Dickens’ name is missing the C on the back cover which tells you all you need to know! The printing is clear but in a large, unattractive font and badly laid out. It looks like something I could have printed on my home printer. Returned.
Read more
9 people found this helpful
Report abuse

Roy Scrivener
1.0 out of 5 stars Corrupted version do not buy
Reviewed in the United Kingdom on 24 December 2020
Verified Purchase
No wonder it's so cheap - someone somehow has 'edited' the story such that many important words have been changed (eg references to Happy 'Easter' instead of Christmas & bah 'bull****" instead of humbug).
This & the badly formatted text indicate that this is not a genuine book & that Amazon should remove it from sale.
Read more
6 people found this helpful
Report abuse

DB
1.0 out of 5 stars Fake scam - Bah Pap Wrinkles! ??
Reviewed in the United Kingdom on 13 December 2020
Verified Purchase
Avoid. Fake version. Took me a few pages to realise this is a cheap self published scam, it isn't Dickens' A Christmas Carol. Someone has downloaded the text, done a few search and replaces and self published. "Merry Christmas" being replaced with "Happy Easter"!!? and "Bah Humbug" with "Pap Wrinkles!"!??
Read more

1.0 out of 5 stars Fake scam - Bah Pap Wrinkles! ??
Reviewed in the United Kingdom on 13 December 2020
Avoid. Fake version. Took me a few pages to realise this is a cheap self published scam, it isn't Dickens' A Christmas Carol. Someone has downloaded the text, done a few search and replaces and self published. "Merry Christmas" being replaced with "Happy Easter"!!? and "Bah Humbug" with "Pap Wrinkles!"!??
Images in this review

Lisa
1.0 out of 5 stars Descends into nonsensical language
Reviewed in the United Kingdom on 24 December 2020
Verified Purchase
The first 60% of the novel was great. After that for some reason the text goes completely to pot: Elderly men become 'antique guys'; children become 'kids'; people don't sit round the fire, or look round, they sit 'spherical the fire' or they look spherical; any mention of someone's heart is preceded by 'coronary' (as if there's any other type of heart); Tiny Tim's brother has his 'ebook open' by the fire, and Scrooge's nephew's Christmas party has 'great video games', alongside the dancing and singing. To top it all off most sentences jumble the words up, so even if the words was appropriate it's difficult to make out what they mean.
Read more
2 people found this helpful
Report abuse

MCPM
1.0 out of 5 stars A poor translation
Reviewed in the United Kingdom on 1 January 2021
Verified Purchase
This was a poor re-translation probably from an other language and many words were wrong. This lead to confusion of the reader and was thoroughly annoying to read. As an example 'Christmas and New Year' was translated as 'Easter and New Year' And there were frequent odd numbers inserted while He was referred to as She on many occasions' which lead the reader asking himself ' who is saying this to whom' Dickens knew how to construct a descriptive sentence - this translator did not. Don't buy this or down-load this if you want to read Charles Dickens !
Read more
2 people found this helpful
Report abuse
See all reviews
Back to top
Get to Know Us
Make Money with Us
Let Us Help You
And don't forget:
© 1996-2021, Amazon.com, Inc. or its affiliates