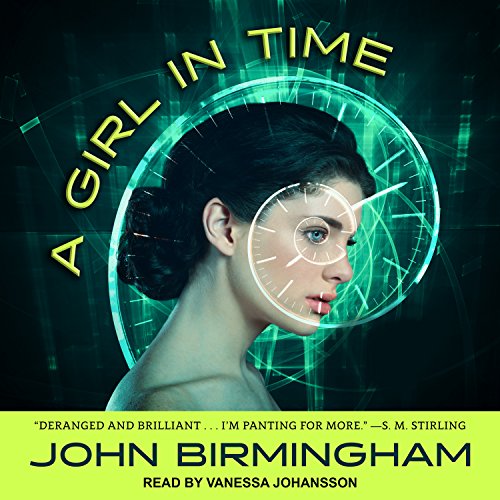 A Girl in Time

4.5 out of 5 stars
4.5 out of 5
463 global ratings
How are ratings calculated?
To calculate the overall star rating and percentage breakdown by star, we don’t use a simple average. Instead, our system considers things like how recent a review is and if the reviewer bought the item on Amazon. It also analyses reviews to verify trustworthiness.

JD (Baen Fan)
5.0 out of 5 stars What do you do if you accidently time jump? Do you stay, or do you go?
Reviewed in Australia on 6 August 2019
Verified Purchase
**WARNING--SPOILERS AHEAD**

John Birmingham has always been a fave author of mine, ever since I first read the Tasmanian Babes Fiasco. He's written several books that deal with time travel before, but this one is something different from the others. This deals with just two main characters, Cady and John "Titanic" Smith. Cady's a 21st Century girl who's just made 9.5 million dollars by creating a game for phones. John is a US Marshall from the 1800's.

He's the possessor of a time jumping watch he found on someone back in his time. Since then he's been jumping around through time, trying to return to his daughter. He jumps into 2016, and saves Cady's life by jumping with her to Victorian London. Now both of them are stranded in time, but Cady is very intelligent, and thinks she knows how to return both of them to their correct times.

After they leave London, inadvertently causing two people they be-friend to be murdered by Jack the Ripper, they end up in Seattle, but the timeline is wrong. Cady's bestie, Georgia, is under house arrest, and Homeland Security is acting like a secret police under Trump's Presidency. They manage to contact Georgia, and escape with her to Ancient Rome, at the time of the Spartacus rebellion.

After Georgia gets killed, they manage to jump back to Seattle 2017, discover Georgia is still alive, and jump.... to the next book..

It's a good read, but I'd be kinda pissed if I had read the book when it first got released, not knowing there would be a sequel, because the book literally just finishes. I'm now looking forward to reading the next book to hopefully, wrap things up.
Read more
One person found this helpful
Helpful
Report abuse

Therbs
5.0 out of 5 stars The Bad Guys Wear Black Hats, Yeah?
Reviewed in Australia on 12 December 2016
Verified Purchase
This is John Birmingham showing a slightly different style. Sure it has Birmingham's honed language and wit but it doesn't have the constant percussive action you may expect..If some of his previous books have been double kick, hairy arse rock played REALLY LOUD AND REALLY FAST then this is more a Led Zep, Kashmir era outing, balancing a strong story riff with good lyrical nuance. But that's enough of the music analogy.
What Birmingham does here is toy with a few different pieces of time and interplay them with a grizzled time hopping western lawman looking for his daughter and a lost millennial game developer, Cady. She was on the verge of swapping out a 2 minute noodle lifestyle to one with diamond studded iPhones and a fleet of gold Teslas driven by robot butlers before "Titanic" Smith rolled into her life. He did this by icing a couple of nasty types who were doing bad things to her, and as you'll find out, he's a real gentleman at times is Mr Smith. Oh, and there's some other time dudes on their tails as well. Yeah, who are those guys?
Look, just buy the damn thing and read it. It's fun.
Read more
6 people found this helpful
Helpful
Report abuse

Tony Calder
4.0 out of 5 stars A fun read
Reviewed in Australia on 10 December 2018
Verified Purchase
Another good story from JB, this one dealing with time travel and alternate dimensions. As usual, JB makes some attempt at trying to keep the science somewhat plausible, as difficult as that is with these subjects. That said, he doesn't (at least in this novel) deal with the consequences of people from alternate dimensions meeting themselves, although that may occur in the second novel in the series.

Other than that, this is what I expect from JB - interesting plot, some good characters and, above all, a fun read.
Read more
Helpful
Report abuse

Jeanette
4.0 out of 5 stars Time travelling with a hot cowboy and cute coder
Reviewed in Australia on 28 October 2019
Verified Purchase
This book overall is fun and exciting. I liked the cowboy’s dialogue, but at times Cady’s seemed to be trying too hard to be of the moment and not only extremely computer savvy but also very cluey about all genres of geek gadgets, movies, animés and overall cultural references. Still I did get more into her as the story developed, and especially after Georgia re-entered the story. I hated their interactions the first time round, but came to appreciate it later.

I also liked the historical minutiae that was skilfully packed into each adventure.

A good read that had me hanging to read the next installment.
Read more
Helpful
Report abuse

M. Edwards
5.0 out of 5 stars Girl in Time
Reviewed in Australia on 30 October 2019
Verified Purchase
After downloading about eight samples on Kindle I read them one after the other. At the end of which process I would decide which ones to purchase. When I hit Girl in Time I stopped reading the samples and just continued with this book. It is that good.
Normally I would spend more time on a review but I feel that is time that could be better spent on the sequel which I am off to purchase right now.
Don’t mess about. Buy it. Read it.
Read more
Helpful
Report abuse

Huntzman
5.0 out of 5 stars Entertaining Read
Reviewed in Australia on 4 March 2020
Verified Purchase
I enjoyed this John Birmingham novel which is centred two very different characters. The author does well to contrast the language of a young millennial with a conservative cowboy from the 1870s to highlight how far our attitudes and turns of phrase have drifted over the last 140yrs. There are a couple of jumps to pivotal events in history and the narrative immerses the reader in the period, as well as a near future hypothesis which is both frightening and remotely plausible. The technology involved is not explained and left to the characters to view as magic. There’s a mysterious organisation, however their motives remained unclear and need to be addressed in the sequel (The Golden Minute). Easy to read and left me looking for the next one.
Read more
Helpful
Report abuse

Makka
4.0 out of 5 stars Good read, awful author
Reviewed in Australia on 16 December 2020
Verified Purchase
It’s a fun read and rolls right along.
I’ve read quite a few of Birmingham’s books and find his misogynist, narrow minded, right wing conservative white male values, as expressed often in his work to show that he is clearly a really unpleasant person.
If that bothers you then I suggest you avoid his work.
Read more
Helpful
Report abuse

HeatherS
3.0 out of 5 stars Tiresome and formulaic
Reviewed in Australia on 24 January 2017
Verified Purchase
The writing is good enough that you can finish reading the book, but the characters tend to be one-dimensional and the writer seemed to be trying to hard to write a strong female hero. In fact, it ended up being a little too unbelievable and you became tired of the girl always being right and she was difficult to like or believe in.
Also, the end was no end at all, and just opened the way for the next sequel, which will probably be more of the same.
Read more
One person found this helpful
Helpful
Report abuse
See all reviews

Razerbug
3.0 out of 5 stars What? The story just stops after act 2?
Reviewed in the United Kingdom on 24 August 2018
Verified Purchase
This book borrows whole cloth from a popular long running British time travel series for its central plot device, and that’s fine, it’s a great concept done a different way and the characters are engaging and the set up gets you hooked.
Reader beware however: This book just stops! End of the second act, are heroes are resolved to the action they must take to set right what has gone wrong and… the book stops. I actually checked my kindly hadn’t skipped a few hundred pages to the end of the file. One moment “let’s do this” next; ‘a girl in time has ended’ (literally).
I’ve encountered cliff-hanger endings in television, were the resolution of the story will come a week later, and I like book series that tell many stories in a constant world… but stopping mid-way through a novel is very jarring (and feels rather nickle’n’dime-ing charging you another paperback to read the end of the one you already purchased).
A shame because I was really engaged with the story at that point after finding the modern writing style and liberally littered pop-culture references a little distracting to begin with. I’m left with a bad taste in my mouth having finally invested myself into the character’s lives and plight… and then nothing more.
Real shame.
Read more
One person found this helpful
Report abuse

ScottishOldMan
4.0 out of 5 stars Fascinating Turn of Phrase
Reviewed in the United Kingdom on 9 September 2018
Verified Purchase
The writing style was solid and the action set pieces well crafted. The dialogue and internal monologues were endlessly interesting, the turn of phrase fascinating and sometimes raising a chuckle. For a science fiction story the technical details were next to non-existent, but that didn’t matter at all. Basically this is a very satisfying ‘fish-out-of-water’ tale told at a never-flagging pace. You feel that the whole thing could be turned into a promising pilot for a TV series. On Netflix, on account of the colourful language.
Read more
Report abuse

DavidMatthewson
5.0 out of 5 stars A great read - recommended.
Reviewed in the United Kingdom on 15 December 2016
Verified Purchase
OK, I confess, I'm along time fan of JB and this book does not break that trend. Time travel, wit, humour and science - along with a nasty dose of President Trump - all come together with time travel to make a 'can't put down read'.

There are two points I'd mention - first a few of the 'archaic' dialogues don't quite ring true - but no bother - and it's also worth noting that whilst this book is complete, it does not offer any conclusion - probably because JB hasn't quite figured out yet what it will be!! So look fore the next instalment!

Mr K.
5.0 out of 5 stars Damn good fun read... dancing through time with an iPhone and a six shooter!
Reviewed in the United Kingdom on 15 February 2017
Verified Purchase
Having just completed several heavy reads, I thought I'd give this a go for light break... Two days later I finished it. What fun! Went to bed 2am as at 11pm I thought "Just one more chapter!"
Oh and I missed my bus stop as I wanted to know what Smith & Cady was going to do next... cheers!
I think one review referred to it as a good old time travelling romp... spot on, and highly entertaining. My wife enquired on several occasions as to what I was laughing at. First book of JB's that I've read... won'the be the last... please, please when's the next installment of Titanic and his 'pardner' ? Damn good fun read)
Read more
Report abuse