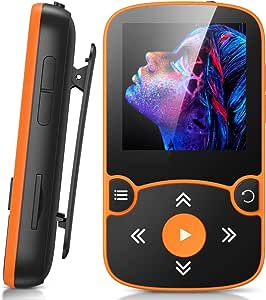 Brand: AGPTEK
3.9 out of 5 stars 101 ratings
Secure transaction
Returns Policy
Amazon-managed Delivery
Your transaction is secure
We work hard to protect your security and privacy. Our payment security system encrypts your information during transmission. We don’t share your credit card details with third-party sellers, and we don’t sell your information to others. Learn more
Amazon-managed Delivery
Amazon manages delivery by using preferred couriers/agents. Order delivery tracking to your doorstep is available

Using Bluetooth 5.0 technology has faster and more stable signal transmission, clearer sound quality and lower power consumption than Bluetooth on the market, thus ensuring a firm and stable connection with your Bluetooth headsets, speakers. Very useful for exercise or when running or go to the gym

3.9 out of 5 stars
3.9 out of 5
101 global ratings
How are ratings calculated?
To calculate the overall star rating and percentage breakdown by star, we don’t use a simple average. Instead, our system considers things like how recent a review is and if the reviewer bought the item on Amazon. It also analyses reviews to verify trustworthiness.

James
1.0 out of 5 stars Needs a firmware update
Reviewed in Australia on 5 November 2020
Verified Purchase
I bought this to use for exercising so I didn't have to carry or hold my phone. The publicity shows it being used for exercise and it had a stopwatch function which I consider necessary.

It is a great little player at a good price and I wasn't expecting something amazing but this has a few issues that need to be resolved.

That means that if you are exercising and using the stopwatch you need to listen to each song play twice.

5. The bluetooth is not as good as my three year old phone but good enough. Has minor drop outs.

It would be ideal to be able to use the stopwatch and skip tracks with the music but maybe that is asking too much??

Acceptable for the price but needs a firmware update to fix some things.
Read more
3 people found this helpful
Helpful
Report abuse

Morne Roets
1.0 out of 5 stars Not impressed at al
Reviewed in Australia on 8 March 2021
Verified Purchase
Tried with multiple MP3 files and most of them does not play without fault. The Bluetooth is also only about 6m before the music start to jitter. The clip is also too weak for any active sport which is the reason for the purchase. Would not recommend this product.
Read more
Helpful
Report abuse

Kool McKool
5.0 out of 5 stars easy bluetooth connectivity
Reviewed in Australia on 11 February 2021
Verified Purchase
It does what the description says it will do, easy to operate, fast delivery
Read more
Helpful
Report abuse
See all reviews

A
3.0 out of 5 stars Decent, but has some items that need attention.
Reviewed in the United States on 19 October 2020
Verified Purchase
Overall, its a decent MP3 player. Easy drag-and-drop interface on the PC screen, which is a pleasant relief from the hubris of iTunes ("Do you want us to disorganize your entire collection? Great!")

Product has three main drawbacks:
1. Its easily susceptible to interference from networks/power lines/other devices.
2. Battery life is short. You'll have to charge it more often than your other devices.
3. The "shuffle" function was programmed by a fifth grader who thinks that three songs is enough. (I've already heard "Thunderstruck" three times during my workout. I don't want to hear it again; and going back to the same song "every other stop" when you push the skip button.)

Its super lightweight, which is nice - but you'll often forget its in your pocket and wonder where it went.

BH
1.0 out of 5 stars Bad hardware, song sorting issues
Reviewed in the United States on 20 January 2021
Verified Purchase
This unit was fairly comparable to the dozens of other similar devices available on Amazon.
As far as features and general functionality for the most part it ranks well, probably in the top 50% of the alternatives.
It also has an attractive physical build quality that on the surface seems much more polished than many others in the price range. Also, at 32 GB, it gives a generous amount of storage without having to use another external micro SD card.
Unfortunately, the unit has some fatal flaws which make it score at the very bottom of the pack.
1) Most critically it has a faulty hardware design. Perhaps I just got a bad unit, but I find this unlikely - especially because AGPTek support would not discuss the failings with me. During my testing of this with similar units I was copying a fair amount of music to and from the internal storage. Out of all the devices I tested with (all with the same cable) this device consistently dropped the USB connection to my PC. While transferring between 5-10 GB of music I had to constantly replug the device and restart the transfer. On several occasions, after dropping connection I got a disk error after plugging it back into my PC. I reformatted the internal card and reset to factory settings, but the same thing continued to happen 3 or 4 more times.
2) Sorting issues. While not as critical as the design flaw with the faulty memory/interface, it is certainly an annoyance. All other players will properly sort when in "Music" mode: 01, 02, 03,...10,11,12,etc. This is true even of some of AGPTek's other models. However this model will sort like so: 01,10,02,20,03,04,05,....11,12,etc.. Again, AGPTek refuses to acknowledge this and in general I found their support much worse than the alternatives (and that isn't saying much because all of these Chinese based companies have very poor support, but AGPTek was particularly bad).
3) Scroll speeds: Whether is is scrolling through a list of songs, or allowing the text of a song/album/artist name to scroll across the screen, this unit scrolls at half the speed of some of the competition. This can be an annoyance as it can take up to a minute to allow the device to scroll through the info of a song which has a long album/artist/song name. There is no reason that the scroll speed couldn't be sped up 50-100% and still be perfectly readable.

Were they to fix their hardware issues, and the sorting problem (and preferably the scroll speeds), I wouldn't have a problem recommending this as one of the best options in the $30 range. As it stands though, I can't recommend this to anyone.
Read more
One person found this helpful
Report abuse

MR.M
1.0 out of 5 stars UPDATE= Crap Clip- Lots of space -but lacks on resume play
Reviewed in the United States on 30 October 2020
Verified Purchase
With 32G, it has plenty of room, but if you have large files or long .mp3's you'll want to think about another player.
Biggest problem is any kind of resume play. there is a resume, but either I cant fine how to make it work, OR it just doesnt work. So every time you power down, be prepared to start from scratch.
UPDATE** 2 weeks in and the clip has broke. Space was the main reason for choosing this, but second was the clip. The plastic for the hinge is weak. At first there was issues with it slipping off pin, now it's just flat broke.
If you're reading this, Hard Pass!
Read more
2 people found this helpful
Report abuse

Amazon Customer
4.0 out of 5 stars Great little player
Reviewed in the United States on 17 October 2020
Verified Purchase
Ever since Apple stopped making traditional small iPods, I’ve turned to MP3 players to fill the void. I’ve owned several. Some good. Some, well, not so good. For the price this one is a good look MP3 player that sounds great. My only complaint is that the FM radio signal seems to be in mono not stereo. I’m a radio freak and still love FM radio but, I do not sense this player is playing the FM in stereo. It is such a letdown for an otherwise awesome player. If you don’t care about FM radio (or stereo output) then this player will be more than fine. I will say the FM mono is crystal clear and very nice on the ears but I just wish it were stereo. MP3 file definitely play in Stereo an sound great.
Read more
2 people found this helpful
Report abuse

Ted Morose
4.0 out of 5 stars Keeps it simple...
Reviewed in the United States on 6 November 2020
Verified PurchaseEarly Reviewer Rewards(What's this?)
Battery life is strong, bluetooth will always suck a battery dry quick, this is no exception. Normal, basic podcast and music listening with your basic in-ear buds will give you good battery use, solid sound; does the job and does it fairly well, nothing more and nothing less. User interface is basic, but it doesn't need to be anything more than the just that. It does have issues with resume play and shuffle as others have noted. If you want a simple, basic player for work or your daily workout, that just gets the job done and nothing snazzy, this player is for you.
Read more
2 people found this helpful
Report abuse
See all reviews
Back to top
Get to Know Us
Make Money with Us
Let Us Help You
And don't forget:
© 1996-2021, Amazon.com, Inc. or its affiliates