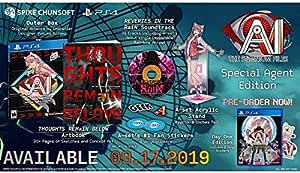 Fastest delivery: 1 - 3 Feb
Ships from and sold by Amazon US.

The mind never lies… In a near-future Tokyo, detective Kaname Date is on the case of a mysterious serial killer. Date must investigate crime scenes as well as dreams on the hunt for clues. From the mind of Kotaro Uchikoshi (Zero Escape series director), with character design by the Yusuke Kozaki (NO MORE HEROES, Fire Emblem series), a thrilling neo-noir detective adventure is about to unfold.

4.8 out of 5 stars
4.8 out of 5
100 global ratings
How are ratings calculated?
To calculate the overall star rating and percentage breakdown by star, we don’t use a simple average. Instead, our system considers things like how recent a review is and if the reviewer bought the item on Amazon. It also analyses reviews to verify trustworthiness.

DuneTiger
4.0 out of 5 stars Ltd. Edition a bit pricey, but Spike returns with a good game
Reviewed in Canada on 20 October 2019
Platform: PlayStation 4Edition: LimitedVerified Purchase
From the team that brought you the Zero Escape series (aka The Nonary Games) comes another twisty narrative adventure that will have you guessing until the end. It shares most of its DNA with (arguably) the superior of the Zero Escape games Virtue's Last Reward with a sprinkling of the disappointing Zero Time Dilemma. Like its older siblings, AI: The Somnium Files is a Visual Novel masquerading as something a bit gamier, but make no mistake, this game is on rails no matter which route you pursue, and like all VNs, it's the story that's going to draw you in.

Unlike ZTD - which was (arguably) a steaming pile - AI is a completely new IP and Spike Chunsoft (herein "Spike") was free to pursue a bunch of zany antics without any shackles to past efforts; here you will play as Date (dah-tay), an amnesiac not-a-detective-but-totally-a-detective in a secret police organization that essentially brain dives into peoples' dreams in order to get leads on cases. In this particular instance, the case revolves around a possible serial killer who displays his victims and snatches one of their eyeballs as a calling card. Oh, you also have the assistance of an AI that lives inside your own eyeball. Intrigued?

If you have any experience with the Zero Escape series, then you know what to expect; newbs, however, should know that the Somnium Files is a visual novel with a little more game than typical entries into the genre provide. What that means is that most of the game will simply be moving to a location, exhausting conversation trees in order to unlock other locations, and repeat ad nauseum. There's very little agency that you have in affecting the outcome of the story, but you will have to gather clues and follow up on leads if you want to make any progress. Eventually, you will get to the "little more game" parts where Date and his department team will strap a person of interest into a "Psync" machine, allowing players to dive into that person's "somnium", which amounts to a dream world. These are small, focused seqences where you basically solve puzzles in order to get through a series of barriers or doors. Most of these puzzles are vague and obfuscated behind the idea that dreams don't have a whole lot of logic. That said, however, none of the puzzles will have you tearing your hair out and the game is constantly reminding you of where you need to go next. The more challenging aspect, especially towards the end of the game, is figuring out how to manipulate the dreams in order not to go over the 6 minutes you're allotted in order to solve each one. Still, because the puzzles can be obtuse, it mostly amounts to trial-and-error until you figure out the correct sequence of actions to get through each somnium.

All of this is to facilitate the story which is, at its heart, a murder mystery and the game is a bit of a darker turn than previous outings from Spike, but it is tempered by copious amounts of humor. Some of the jokes don't translate very well, though, and the ones they came up with in English can be hit-or-miss. For example, a lot of wordplay and puns aren't translated in a literal sense and the localization team instead tried to come up with stuff to fit the 'flavor' of the original joke, as it were. Sometimes it works well, and sometimes it doesn't, but generally speaking, the localization is quite good and even the dub is very good if you choose not to switch the language to Japanese. Like VLR, the story branches out into several routes and you are provided with a flowchart that will allow you to skip back to certain parts of the story where you can branch out into a different path. Veterans, don't get excited just yet - while the flowchart is going to be very familiar, the narrative behind it isn't nearly as clever as it is in VLR; this is really just a gameplay convenience this time. On the plus side, the "true" route isn't hidden and you will uncover it naturally rather than needing to look at a FAQ to get the right set of actions. On the downside, the true ending was a slight let-down for me, but not an outright disappointment, so YMMV.

The only real downside to this game is the same one that was present in ZTD; the models are all beautifully-rendered and cel-shaded, but they are poorly-animated. This isn't really a problem since this game is essentially a visual novel, it becomes a little silly when you're watching an action sequence that is stiffer than I am when I get out of bed in the morning. For some reason, Spike can't seem to get their animation laid down in realistic fashion. Instead, character models move like robots despite being gorgeous in design with the only motion capture (that I noticed) being a dance that one of the characters does as part of her development.

In the end, though, this is a much better effort than ZTD ever was and while the ending might not be everyone's cuppa, the journey is certainly a fun ride. Despite the Somnium sections of the game being highly interactive, most of the game is simply selecting dialogue choices or looking and random objects in a room, hoping someone will make a funny comment about whatever you clicked on. AI: The Somnium Files is, when you get down to it, a great little murder mystery with a bit of future tech thrown in for good measure. If you're looking for a mostly chill experience with an intriguing story, then this game is for you.

Johnny Le
2.0 out of 5 stars damages on the boxes. Not mentioning anywhere
Reviewed in Canada on 7 September 2020
Platform: PlayStation 4Edition: LimitedVerified Purchase
Item can't send a pristine, near mint good.

Still expensive for a used good. Price ain't worth it.

2.0 out of 5 stars damages on the boxes. Not mentioning anywhere
Reviewed in Canada on 7 September 2020
Item can't send a pristine, near mint good.

Still expensive for a used good. Price ain't worth it.

Tross
5.0 out of 5 stars Amazing!
Reviewed in Canada on 13 October 2019
Platform: PlayStation 4Edition: LimitedVerified Purchase
Spike Chunsoft can do no wrong, and this is sure to be one of the most criminally underrated titles on the PS4. Highly recommended.
Read more
One person found this helpful
Report abuse

J.D.
5.0 out of 5 stars I didn’t have to leave the house at Christmas time to shop for this
Reviewed in Canada on 27 December 2019
Platform: PlayStation 4Edition: LimitedVerified Purchase
It was cheaper than the one in the store..... my daughter loved it ... thanks guys
Read more
Report abuse

Cindy Pinky
5.0 out of 5 stars Perfect in every point
Reviewed in Canada on 14 October 2020
Platform: PlayStation 4Edition: LimitedVerified Purchase
Excellent game, excellent boxser everything is perfect
Read more
One person found this helpful
Report abuse
See all reviews
Get FREE delivery with Amazon Prime
Prime members enjoy FREE Delivery and exclusive access to movies, TV shows, music, Kindle e-books, Twitch Prime, and more.
> Get Started
Back to top
Get to Know Us
Make Money with Us
Let Us Help You
And don't forget:
© 1996-2020, Amazon.com, Inc. or its affiliates