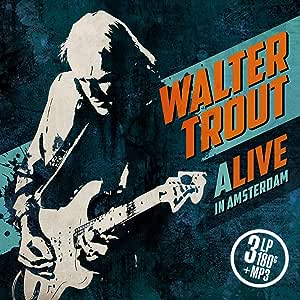 Secure transaction
Your transaction is secure
We work hard to protect your security and privacy. Our payment security system encrypts your information during transmission. We don’t share your credit card details with third-party sellers, and we don’t sell your information to others. Learn more
Details
Ships from
Amazon AU
Sold by
Amazon AU
Alive In Amsterdam has been added to your Cart
New (3) from
$48.42 + FREE Delivery

MARKETING & PROMOTION •Extended TV, Online and Print marketing campaign •Consumer ads to be placed in musician-oriented magazines •Full service press mailing to all major publications. •Walter Trout continues his Battle Scars Tour in the US and Europe, he is available for promo during this tour. SELLING POINTS •ALIVE in Amsterdam contains songs pulled from every era of Walter’s five-decade career, but his latest album ‘Battle Scars’ has been the centre of the set. •Walter has mesmerized guitar fans around the globe with his masterful phrases and unique style. •Walter Trout is is a three-time winner of the Overseas Artist Of The Year title at the British Blues Awards, and a three-time Blues Music Awards nominee. •In 2015, he won the Sena European Guitar Award and also earned him the #6 slot in BBC Radio 1’s Top 20 Guitarist listeners’ poll.

4.8 out of 5 stars
4.8 out of 5
211 global ratings
How are ratings calculated?
To calculate the overall star rating and percentage breakdown by star, we don’t use a simple average. Instead, our system considers things like how recent a review is and if the reviewer bought the item on Amazon. It also analyses reviews to verify trustworthiness.

sonicabuse
5.0 out of 5 stars Walter Trout at his fiery best.
Reviewed in the United Kingdom on 21 February 2017
Verified Purchase
Walter Trout is one of the great blues guitarists. Whilst he is a technically gifted performer, what truly shines through in Walter Trout’s work (and particularly in his live work) is the man’s unfettered passion for the writing and performance of music. To witness Walter on stage is to witness the eye of the storm, and it is that fire that informed last year’s ‘Battle Scars’. A rumination on Walter’s battle at the brink, ‘Battle scars’ was a raw, naked account of Walter’s brush with Hepatitis C and the urgent liver transplant, delivered just in time, that bought him back to his wife and to his fans. As such, the title of the live album recorded on the ensuing tour, ‘Alive in Amsterdam’, has a far more powerful undercurrent to it than might first be appreciated. Indeed, ‘Alive in Amsterdam’ is not just a live album from a great blues guitarist, it is a celebration of the life that Walter has been given and the results are explosive.

Opening with a brief introduction, followed by tumultuous applause, Walter responds in the only way he knows how, with a blistering solo (entitled ‘play the guitar’) that leads into the lengthy blues work out that is ‘help me’. With Walter’s exquisite playing at the forefront, there’s a fire that burns at the heart of the music and it’s easy to imagine Walter, eyes closed, fingers flashing over the fret board as he relishes every single note. It’s a simple pleasure to listen to Walter and his sidemen, Sammy Avila (keys) and Johnny Griparic (bass) interacting so fluidly over the course of the song and as ‘I’m back’ (a Luther Allison cover and surely the album’s unofficial title) kicks in with plenty of rock ‘n’ roll swagger, Walter yells out “here’s a song with a message!”, clearly so elated by his audience that he can contain himself no longer. The pace slows on the next cut, the lengthy, late-night blues of ‘say goodbye to the blues’, which sees the gritty riffs and furious pace of the previous song swapped for the blurry vision of a whiskey too many in a late night, New York bar. Dedicated to the late, great B. B. King, ‘Say Goodbye…’ is recast as a moving tribute to “the greatest blues man that ever lived” and Walter’s guitar wails at the loss.

Having opened the show and drawn the audience in, Walter takes us on a visceral tour of his own experiences with ill-health as he tackles seven tracks from ‘Battle scars’ (slightly reordered from the original sequence) starting with the bleak ‘almost gone’, a track that deals with Walter’s fear of death with a poignancy and honesty that few artists are willing to offer up. Yet, for all that the subject matter is dark, the music belies the gravity of what must have been an awful situation, and the gritty blues that Walter deals in contains a touch of hope even when Walter himself must have been at his lowest ebb. Up next is ‘Omaha’, named after the town in which Walter was hospitalized, and it’s a rough ride as Walter details the frail state that he achieved as he edged ever closer to death, the transplant at that point still far away. Once again, however, the music keeps things from becoming too bleak and Walter’s gift is to take so enervating an experience and transcend it to make some of the best music of his career – just check the raging solo that whips across the tune like a hurricane for evidence of the inner strength that kept Walter with us. Adding an additional emotional layer to the performance, Walter’s son John appears on the bristling blues of ‘Tomorrow seems so far away’, a hard rocking performance that belies the sense of time slowing to a crawl that informed it.

The order of ‘battle scars’ shifts next as Walter leads straight into the pounding ‘playin’ hideaway’ a track that, in the live environment, gives AC/DC a run for their money in the hard blues stakes and which engenders a mass singalong. One of the very few songs on ‘Battle scars’ where the music takes a step into the darkness to join u with the lyrics, ‘haunted by the night’ is a beautiful piece of music that cuts back on the hard-riffing for an approach that sits closer to Gary Moore as Walter lays bare the demons that consume the hours before dawn. Things brighten, however, for the smart groove of ‘fly away’ which sees Walter’s imagination (if not his body) take flight, and the song packs an added emotional punch as you come to the realisation that Walter’s dreams did, indeed, come true. Sequenced in the album to follow ‘tomorrow seems so far away’, the Neil Young-esque ballad ‘please take me home’ draws the ‘battle scars’ material to an end on a poignant note. Walter’s talented son John returns for an extended jam session built around the ever-green ‘rock me baby’ next and it’s a cracking version of a tune that evokes the bittersweet image of B. B. doing his very best Muddy Waters impression. Bellowed out from the audience, Walter graciously agrees to play the beautiful ‘Marie’s mood’ next and it is justifiably met with rapturous, yet respectful applause. Another beautiful late night blues, ‘Marie’s mood’ is a masterclass in slow-burning guitar work that is almost Gilmour-esque in its magnificent subtlety. If ever you doubted Walter’s versatility, this stunning instrumental will set you straight. Of course, you can’t keep Walter down for long, and the blazing ‘serves me right’ shows that Joe Bonamassa is just one of many young guitarists who owe a debt to Walter’s enduring influence. With a lengthy drum solo that gives Michael Leasure the chance to show off his chops, it’s a rollicking ride. The album (and the show) ends with the gnarled balled ‘love that we once knew’, another track that carries a similar emotional resonance to Neil Young’s ‘Harvest’, as Walter sings of a love that has run its course. An emotional singalong, ‘love that we once knew’ is the perfect show closer and it leaves the audience cheering into the night.

‘Alive in Amsterdam’ is a sonic firework of an album that plays like an extended celebration of life, love and music. From the emotional introduction given by Walter’s wife (and manager) Marie through the amazing dueling guitars of ‘Rock me baby’ (as Walter plays alongside son John) and, of course, with the amazing suite of songs from ‘battle scars’, ‘Alive in Amsterdam’ is a white-hot ride that takes in the many wonderful facets of the blues and demonstrates once and for all just why Walter Trout is so revered. Nothing short of a testament to Walter’s enduring passion, ‘Alive in Amsterdam’ is a joy to listen to that will leave you smiling for hours after – it was a pleasure to review and it should be the very next album on the list of any serious music fan.

Like this review? Head on over to SonicAbuse.com for many more, as well as some cool interviews and features...
Read more
7 people found this helpful
Report abuse

I've mostly been listening to this in car and have to say it's great drive time music.
Read more
One person found this helpful
Report abuse

John M
4.0 out of 5 stars He’s back and kicking!
Reviewed in the United Kingdom on 4 August 2019
Verified Purchase
Old blues rockers never die, they just get more talented. He’s back from the brink of disaster and in fine musical shape on this CD. He freely shared his talent and spotlight with up and coming British bluesman Toby Lee, still a teenager at the time of writing. Go Trout!
Read more
Report abuse

Calum
5.0 out of 5 stars Walter and the band at their Scintillating best.
Reviewed in the United Kingdom on 17 January 2019
Verified Purchase
If you are new to Walter and his music - where have you been? - this would be one excellent start. Walter and his varied bands have always been best seen live. This is the current band at their very best.
Read more
Report abuse

Woodpecker4
5.0 out of 5 stars Great comeback album!
Reviewed in the United Kingdom on 22 March 2019
Verified Purchase
Excellent double live album from Walter Trout recorded on his comeback tour. If anything the fire and passion are even more intense now than before. Recommended!
Read more
Report abuse
See all reviews
Back to top
Get to Know Us
Make Money with Us
Let Us Help You
And don't forget:
© 1996-2021, Amazon.com, Inc. or its affiliates