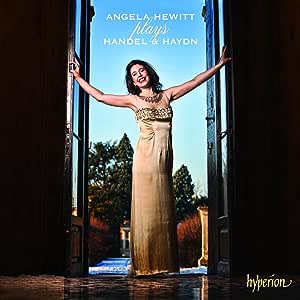 Secure transaction
Your transaction is secure
We work hard to protect your security and privacy. Our payment security system encrypts your information during transmission. We don’t share your credit card details with third-party sellers, and we don’t sell your information to others. Learn more
Details
Ships from
Amazon UK
Sold by
Amazon UK
New (11) from
$23.98 + $3.00 Delivery

Recorded and released in the anniversary year of both Handel and Haydn, Hyperion presents an effusive celebration of the two composers, performed by Hewitt whose renditions of 17th- and 18th-century keyboard works on the piano have received the highest possible acclaim.

4.7 out of 5 stars
4.7 out of 5
7 global ratings
How are ratings calculated?
To calculate the overall star rating and percentage breakdown by star, we don’t use a simple average. Instead, our system considers things like how recent a review is and if the reviewer bought the item on Amazon. It also analyses reviews to verify trustworthiness.

Enobarbus
5.0 out of 5 stars Delightful
Reviewed in the United Kingdom on 16 March 2020
Verified Purchase
Angela Hewitt has wonderful charm, brilliance, elegance and whimsey in the Handel suites and her performance of the magnificent Haydn F minor variations is probably the finest I've heard. Highly recommended!
Read more
Report abuse

DAVID BRYSON
5.0 out of 5 stars AAA for HHH
Reviewed in the United Kingdom on 2 November 2009
Verified Purchase
If a modern Fazioli grand piano had been available to Haydn I can't imagine him spurning it in favour of a fortepiano, particularly for the robust E flat sonata that concludes this recital. Still less can I envisage Handel, the leading virtuoso of his day, spending much more time with a harpsichord if he had an instrument like this at his disposal. Authenticity is all very well and I'm all in favour, but music does not exist for instruments, instruments exist for music, and advances in the design of instruments should be put to music's benefit.

Let me offer my enthusiastic endorsement to everything that Angela Hewitt does in this selection marking the anniversaries of both masters (Handel d 1759 Haydn d 1809). What she does is more than just play: she contributes her own liner note as usual, and as always it is a pleasure to read - informal and full of enthusiasm and charm. She takes us through some textual issues in the Handel chaconne, and lets us into her thinking in occasional matters of interpretation. I had already been struck by a dramatic stringendo that she applies to one part of the same piece, and the note tells us why she does it that way. In particular I like her sensible comments regarding double-bar repeats. Apparently there is another chaconne by Handel with no fewer than 62 variations, `...and if you repeated all of those you'd be there for a while.' However let me reassure anyone feeling anxiety on this score that the first movement repeat is rightly observed in the Haydn sonata.

The playing here is full of the effortless and natural beauty that has been the mark of everything I have heard Angela Hewitt do. Her style in 18th century music is not much like the style of her great compatriot and forerunner Gould. It is less `stylised', using more rhythmic inflexion and more sustaining pedal. She is not afraid of a full tone here and there, notably at the start of the Haydn sonata but also in the fugue from Handel's F minor suite, where Handel thickens his bass with chords. Ms Hewitt speaks admiringly about this fugue, but elsewhere remarks (reasonably enough) that `Handel's part-writing may not be as sophisticated and masterful as Bach's.' This is an interesting point. Tovey looked down his nose at Handel's fugues for not being full-dress Teutonic exercises like Bach's with countersubjects strettos and all the paraphernalia, but Handel's part-writing is effortless and accomplished as far as it goes. Handel had been to Italy, and in Italy there was a tradition of improvised fugues that served a different objective from the German style. It seems to me that the fugal idiom provided a certain kind of vigorous expression (I don't know of any slow fugues by Handel) instead of building up a pattern a la Bach. Anyway, there is one fugue each in these partitas, and very nicely played they are.

In Haydn's half of the recital we have the superb F minor variations as well as the big E flat sonata. Haydn and Mozart did not write many works in minor keys, and this set of variations takes nearly 17 minutes, which is as long as a number of Beethoven sonatas. I'm hearing it played here as I think it should be played, with proper solemnity. A lot of the comment I read highlighting some supposed jocularity in Haydn's style gets on my nerves for its patronising attitude. There is certainly elegant 18th century wit and point in many of his compositions, but his basic characteristics seem to me to be grace, proportion and humanity. Writing a major instrumental composition in a minor key at this late date, long after his supposed Sturm und Drang phase, indicates something special from this composer, and this performance does the piece justice.

I like it all from beginning to end. The Handel works were not greatly familiar to me, so I like them for that reason quite apart from being such fine music. The Haydn variations and sonata were on my home ground, I welcome them for that reason and it is going to be very easy to live with these performances. The recordings date from this year 2009 and last. Perhaps there is a little too much resonance, but nothing that worries me. Among them, Handel Haydn and Mme Hewitt have given me something to treasure as well as admire.
Read more
14 people found this helpful
Report abuse

この音盤において、ファツィオリの音は、きれいに録られている。
Read more
One person found this helpful
Report abuse
Translate review to English
See all reviews
Back to top
Get to Know Us
Make Money with Us
Let Us Help You
And don't forget:
© 1996-2021, Amazon.com, Inc. or its affiliates