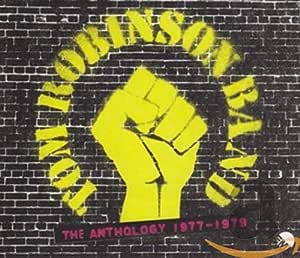 Comprehensive 3 CD+DVD collection from the agitpop band, including 2 albums, a clutch of singles, previously unreleased radio sessions and great television appearances. It's a reminder of just how brilliant TRB were.

4.5 out of 5 stars
4.5 out of 5
64 global ratings
How are ratings calculated?
To calculate the overall star rating and percentage breakdown by star, we don’t use a simple average. Instead, our system considers things like how recent a review is and if the reviewer bought the item on Amazon. It also analyses reviews to verify trustworthiness.

The Punk Panther
5.0 out of 5 stars Up against the wall...
Reviewed in the United Kingdom on 14 January 2019
Verified Purchase
What an excellent mini box-set this is from a much-loved band whose light shone so brightly for eighteen short months or so.

The albums included are:-

What a debut album this was. It had taken the Tom Robinson Band seemingly ages of "cult band" existence before it finally hit the streets in the hot May of 1978. It is up there with "The Clash", "Inflammable Material", "Ramones", "Rattus Norvegicus", Talking Heads 77" and "New Boots And Panties" as one of the best debut album entries into the music world of the late seventies. It burned with as much anti-establishment fire as any of the punk offerings, in fact, probably more so. I would say it was the most politically potent of all of them. It was such a shame that TRB's fire extinguished so soon after it had taken light.

The album kicks off, literally with the acerbic, punky, gloriously riffy "Up Against The Wall", which is still one of my favourite "punk" singles". It bristles with teenage venom and ire. Every last second of it is absolutely glorious.

Then we get the quirky, tongue-in-cheek "Grey Cortina", with its name check for Bruce Springsteen (who not every body had heard of at the time, believe it or not), followed by the laid-back but cynical, slightly bluesy "Too Good To Be True". Old Tom (or young Tom as he was) had his finger on the pulse of contemporary UK politics, for sure.

"Ain't Gonna Take It" was a loud, chanty rant against the machine and "Long Hot Summer" was an atmospheric diatribe against racism with some excellent guitar from the enigmatic Danny Kustow and swirling organ from Mark Ambler.

The rocking, anthemic “Winter Of 79" precedes the post apocalyptic, unnerving run of tracks that begins with the unnerving "The Man You Never Saw", "You Better Decide Which Side You're On" and the disturbing post-nuclear “You Gotta Survive". The original album ends with the totemic "Power In The Darkness" with its magnificent spoken word bit in the middle, parodying a bigoted Tory MP. Marvellous stuff, especially if you're eighteen, as I was at the time. Angry young men couldn't have asked for more.

Also needing mentioning was the chart single, the anthemic "2-4-6-8 Motorway" and the excellent b side, a cover of Bob Dylan's "I Shall Be Released". Both of which are included on this re-issue. Also included is the "Rising Free" EP and the tracks "Don't Take No For an Answer", "Glad To Be Gay", "Martin" and "Right On Sister". You know, while The Clash, The Jam and The Ramones were my favourites, I always retain one hell of an affection for TRB. In them lay the heart of 1978.

After a superb debut album, this was an eagerly awaited follow up offfering that never really caught on. Keyboardist Mark Ambler and rummer Dolphin Taylor had left. New "members" of the band had arrived (in reality session musicians) and TRB seemed to be heading straight down the spout as soon as they had spewed out of it. This was a shame as there is some good stuff on here - the poppy "All Right All Night", (should have been a single) "Why Should I Mind", "Black Angel", "Let My People Be" and "Crossing Over The Road" are all excellent.

Possibly the standout tracks are the protest song concerning the death in Police custody of Liddle Towers, "Blue Murder" and the Peter Gabriel co-written "Bully For You".

The quality fades off at the end, though, and "Law And Order" is pretty execrable, it has to be said. Despite all that I still have a great deal of nostalgic affection for this album.

All in all, though, it was a real shame that these two albums were TRB released. They were great while they lasted. It all just fizzled out so soon, way before it should have done.

There is some excellent live material included here - John Peel session material and concert recordings from High Wycombe and Golders Green. The sound quality is excellent and the band are on fire. They bring back such great memories. TRB were a great live band. I was lucky enough to see them live and they were superb.

The concert footage is just so nostalgic although I have to admit that it has dated somewhat, if I am brutally honest. I watch it occasionally for a bit of a nostalgia kick, but I prefer to listen to the music, which hasn't dated. The Granada TV documentary is a real eye-opener as to just what things were like in 1978-79. Music such as TRB produced helped one through, that was for sure. God bless 'em.

funky kimchi
5.0 out of 5 stars Comprehensive review of a great band.
Reviewed in the United Kingdom on 15 May 2019
Verified Purchase
News of the recent death of Danny Kustow resulted in my searching for music featuring his guitar playing. This anthology turned up and the extremely reasonable pricing encouraged me to make a purchase. What a gem this is! A comprehensive collection of studio and live tracks tracing the trajectory of the band, including many great songs and their connected memories. As a 16 year old I watched TRB at the Marquee and in High Wycombe's Nags Head and Town Hall. Wonderful memories of emotional and exciting gigs captured in the cds and dvd of this attractively packaged box set. Highly recommended.
Read more
2 people found this helpful
Report abuse

Mr. Owl
5.0 out of 5 stars Can't find the floor of the wardrobe...
Reviewed in the United Kingdom on 12 October 2013
Verified Purchase
Like others buying this set I was a teenage fan of TRB. Little did I know as a pimply 13 year old watching the band's 1977 Top of The Pops appearance that I would soon gain an education on political and social issues of the time. Even my Dad, who could exhibit various isms thought Tom was a top chap when he personally replied to my fan letter, enclosing a signed Café Society single and other paraphernalia. Although numerous bands of the time paid lip service to being on the same level as the fans, folk like Tom and Paul Weller made efforts to practice what they preached. This set includes practically everything TRB released and more besides, all compiled with care and attention. The booklet contains plenty of pictures and memorabilia and is well annotated. The audio re-mastering is sprightly and fresh, making it hard to believe this material is over 30 years old. There's an excellent Peel session, featuring a version of "Don't take no for an answer" which trumps the `Rising Free' EP take. There's also 2 vintage BBC concerts for radio: one from March '78 when the original group was at the height of its powers and another 13 months later with the less cohesive 2nd incarnation of the band (still good live though). The "Power In The Darkness" LP is of course the central document of this set and it still stands out as one of the best LPs of its era: well crafted songs, performances and production. The political message is sadly just as relevant now as it was then - the title track could've been written yesterday. And with the "2-4-6-8" b-side - Tom's slight re-write of "I Shall Be Released" - we have one of the best Dylan covers ever.

The added DVD makes this a must-have purchase. Peeling back the years with a fascinating Granada TV documentary which is as much a great piece of social history as it is a TRB one. Lovely to see individual interviews with the band and made even better that the documentary includes some fabulous live performances - Danny Kustow's stage antics during "2-4-6-8 Motorway" are priceless. During his guitar solo he struts, gyrates and gurneys hilariously, both mocking and celebrating the role of `Guitar God'. That duality was at the heart of his playing and now older I appreciate the debt his bluesy, soulful playing owed to Paul Kossoff (Danny's Les Paul was once owed by Kossoff). If Danny's recent appearance in a video-link interview on Tom's website is anything to go by, he's become another sad casualty.

This set is a great trip down memory lane for old gits like myself but there is much to enjoy and marvel at for those of a younger age coming to this music for the first time.
Read more
14 people found this helpful
Report abuse

terence kenny
5.0 out of 5 stars So pleasantly suprised how excellent trb were
Reviewed in the United Kingdom on 15 June 2018
Verified Purchase
Had most of this on vinyl many moons ago. Though it was worth getting at this price. It was. Covers everything done for emi. So no need to buy anything else from this period. Not having heard this stuff for years. So pleasantly suprised how excellent trb were. Recommended
Read more
2 people found this helpful
Report abuse

GorgonLondon
5.0 out of 5 stars Just brilliant.
Reviewed in the United Kingdom on 15 July 2013
Verified Purchase
Can there be a more underrated musician than Tom Robinson and TRB? And has any band been more erroneously forgotten? This 3CD and 1DVD set is all you need to recapture the spirit of late seventies grass-roots rock that not only delivered brilliant music but also head-on addressed the political and social problems the UK faced at the time... wait, listening to it in 2013 there's not much updating needed for many of these tracks to sound relevant right now. Never really understood why TRB were aligned with punk... all they shared was 1977. This set has a great booklet that charts the rise and fall from today's perspective.
Read more
9 people found this helpful
Report abuse
See all reviews
Get FREE delivery with Amazon Prime
Prime members enjoy FREE Delivery and exclusive access to movies, TV shows, music, Kindle e-books, Twitch Prime, and more.
> Get Started
Back to top
Get to Know Us
Make Money with Us
Let Us Help You
And don't forget:
© 1996-2020, Amazon.com, Inc. or its affiliates