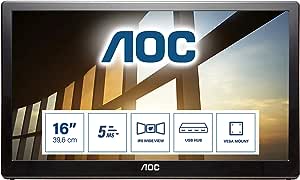 Brand: AOC
4.3 out of 5 stars 133 ratings
Available from these sellers.

4.3 out of 5 stars
4.3 out of 5
133 global ratings
How are ratings calculated?
To calculate the overall star rating and percentage breakdown by star, we don’t use a simple average. Instead, our system considers things like how recent a review is and if the reviewer bought the item on Amazon. It also analyses reviews to verify trustworthiness.

Andrew Redding
1.0 out of 5 stars Does Not work.
Reviewed in Australia on 14 January 2021
Style Name: USB 3.0Verified Purchase
I couldn't get it to work after using the disk that comes with it and stuffing around i got a friend to look at it 2 hrs later still no good. Faulty
Read more
Helpful
Report abuse

David
5.0 out of 5 stars Service
Reviewed in Australia on 27 July 2019
Style Name: USB 3.0Verified Purchase
Does exactly what was described and is exactly what I wanted
Read more
One person found this helpful
Helpful
Report abuse
See all reviews

Andy
2.0 out of 5 stars Poorly designed
Reviewed in the United Kingdom on 13 September 2019
Style Name: USB 3.0Verified Purchase
I got this monitor to place on my desk. I'd run out of HDMI ports on my PC, so thought a USB monitor would be an ideal solution.

However, the cable they provide is insanely short! While on my desk, it doesn't even each half way down to the floor.

Luckily I had a USB 3 extension cable, so was able to connect everything up, and for a while it all seemed fine. However, there were unusual moments where the screen would just freeze on me. The picture would remain, so I wouldn't notice sometimes until I tried to move my mouse over to that area and noticed I couldn't see it.

Eventually, I got fed up and re-positioned all of my cables, USB hub, etc so that I could plug it in directly, saving me a USB3 cable. However, when I plugged it directly into my USB hub it wouldn't display any picture. The strange thing is that it was plugged into the exact same port with the extension cable.

I called up Amazon technical support, and after explaining my issue, they didn't even attempt to help me, and instead offered a replacement or a refund. I therefore assumed that this issue had been somewhat common, so opted for the refund instead.

Shame, because I did like having an extra monitor :(

Amazon Customer
1.0 out of 5 stars Not impressed
Reviewed in the United Kingdom on 10 February 2019
Style Name: USB 3.0Verified Purchase
I had tried this and packaged it back up for return within 10 minutes. Monitor itself feels very cheap and plastic. Screen resolution was not as good as I had expected (connected to Microsoft Surface Book) and the colours looked very washed out. What clinched it for me was the high pitched whining sound coming from the back of the monitor - really annoying and unworkable. As mentioned, now returned for refund. Wish I had gone for the more expensive Asus screen in the first place.
Read more
5 people found this helpful
Report abuse

JohnC
5.0 out of 5 stars Wish I'd bought this years ago!
Reviewed in the United Kingdom on 31 December 2020
Style Name: USB 3.0Verified Purchase
Firstly, I have no idea what 'sheerness' or 'thickness' has to do with a review of a monitor, so no marks. It's all about quality of picture, surely, and on that basis this is very good. Admittedly, not quite as sharp as my usual desktop monitor , but more than good enough for my purposes

Only issue I've got, which I'm not marking it down on as I suspect it's a Win10 issue, is that it won't auto-rotate the image. I contacted both AOC and DisplayLink, but neither could help. You have to select portrait or landscape manually in Windows settings.

I currently use this as an extension to my main monitor and move documents across to it so I can easily have a Word document open in portrait mode on the AOC, whilst a spreadsheet is open in landscape on my primary monitor.

Found the quickest way to switch this monitor on and off (it doesn't have a switch) is to use Windows+P keys and select 'PC screen only' when I need it off, and, for my usage, 'Extend' when I need it on.

All in all I'd recommend this if you need a second monitor, either to take on the road or if like me your work flow involves the need to have multiple documents open and all you want is to extend the size of your primary monitor on a temporary basis.
Read more
Report abuse

Warren Farm
5.0 out of 5 stars Easily add a second screen, even for portable set ups
Reviewed in the United Kingdom on 5 January 2021
Style Name: USB 3.0Verified Purchase
Easy to plug in and use, and highly portable. Great if you have a tiny laptop and need a second screen but don't want to be tied to one desk. It works in landscape or portrait mode - just turn it and it rotates the image to suit - which is great when working on documents or spreadsheets.

I also have the USB-C version for a different laptop, which is even better (though was a bit tricky to set up, if I remember rightly. Got there in the end). It's also slimmer and has better quality screen, so if you have a choice of USB 3 or C, go C.

Only complaint is that you can't get it to sit as vertically as I'd like, and it's a bit unstable when it's at the limit of its verticality. A slightly longer leg would make a big difference. Similar issues with verticality on the USB-C version, though that has a magnetic folding cover like a tablet, which also helps protect the screen.
Read more
Report abuse

Erick
1.0 out of 5 stars Nice panel but poor drivers
Reviewed in the United Kingdom on 5 October 2019
Style Name: USB 3.0Verified Purchase
This screen was hopeful but the software and drivers are terrible. Screen has no hardware switches to adjust display, everything is done via software. When you install the software and try to adjust AOC screen it was making the changes to my main screen. So it messed up my existing main screen setting. The driver also causes flicker on main monitor which caused me to reinstall Windows to get rid of it.
Read more
2 people found this helpful
Report abuse
See all reviews
Back to top
Get to Know Us
Make Money with Us
Let Us Help You
And don't forget:
© 1996-2021, Amazon.com, Inc. or its affiliates