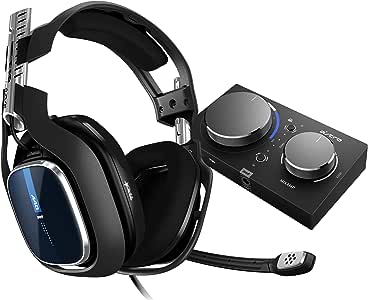 4.6 out of 5 stars
4.6 out of 5
730 global ratings
How are ratings calculated?
To calculate the overall star rating and percentage breakdown by star, we don’t use a simple average. Instead, our system considers things like how recent a review is and if the reviewer bought the item on Amazon. It also analyses reviews to verify trustworthiness.

Xecy
1.0 out of 5 stars Feels extremely cheap and squeaky. It's gray not black.
Reviewed in Canada on 16 December 2019
Platform For Display: PlayStation 4Edition: A40 TR + MixAmp Pro TRVerified Purchase
I've always been a big fan of Astro headsets. So it pains me to give this headset a review and score of 2/5 and I wouldn't recommend it to anyone new buying Astro's for the first time.
If you're willing to listen to my tale read on.
The tale begins back when I was in grade school. I used to use super cheap headset the "Logitech PC Headset 120" since I didn't know anything about computers back then. I used them to much that the foam started to disintegrate, to the point of where the plastic used to dig into the my ears. At some point I would just forget about the pain since I was so obsessed with Diablo II at the time. Later on my parents got me the first generation of the Astro A40's and I was blown away by how much better they were then my Logitech ones I had at the time. I was completely hooked, they looked amazing, sounded amazing, and were insanely comfortable. I starting using them in around 2006, in 2010 the mix amp broke, however I was still able to use them without it, until 2011 when the headset decided to stop working as well. The next headset I bought was the Astro A50 Gen2, which was also amazing, for a time. I don't know if I use them to much or maybe it was just the pairs I had. But in about 1 year's time the battery life degraded slowly from 5 hours to it had to be plugged in to work. I bought a second Astro A50 also Gen2 and the battery life was supposed to be a improved version of the Astro A50 Gen2. It started with around 8 hours of battery life and it also degraded slowly to around 2 hours of battery life in a year and a half. I bought the Astro A50 Gen3 and it has the same issue as the other 2 versions, in about a year it went from 14 hours to around 6. I then decided I had enough with wireless headsets since the battery life was an issue for me. Sometimes I do 30 hours gaming sessions, on the weekends. The issue I have with this headset it was a pain in to get it to work. For what ever reason it decided to not work straight out of the box. I had to plug in the headset unplug it, replug it in, unplug it, over and over again, swap PC to PS4 back and forth swap to different sound outfits etc. Eventually I did get it to work, I don't even know if it actually uses the Dolby digital output or not. The sound still works without it being plugged in. Sadly it also isn't compatible with my Nividea Nu Audio card. When I plug in the digital audio cord into the Nu Audio card I lose all sound. However if I unplug it and just use the micro USB then it works, or if I plug the digital audio straight into the motherboard. I never had this issue with any of the older Astro headsets, so I don't get why I'm suddenly having this issue. The sound straight out of the box is very odd, it's super load some times and super quiet at other times. It tends to make things that should be quiet extremely loud while making things that should be loud quite, I noticed other people having the same issue. I ended up googling up some better specs for the Astro command center, to improve the sound. With those improvements it actually helped a lot overall in terms of making the sound a lot better, it's actually sounds better now than my older A50's. Now for the part that can't really be easily fixed. The headset feels cheap. I'm not exactly sure if they changed the plastic to reduce costs or if again I got some kind of defect in the headset I received. Picture a door with a squeaky hinge being opened and closed, now picture that same door having the same issue but made of plastic now. That's what this headset sounds like if you move your jaw, move your head, bump your shoulder with your head. Any kind of movement makes the headset creak and squeak. I wanted to figure out what exactly the issue was, so I decided to take my old Astro A50 that didn't have any creaking or squeaking and took them apart. I replaced all the plastic on the A40's with the A50's. The plastic I replaced was the top headband and the plastic bands that hold the speakers to the metal brackets. And.... Guess what no squeak noise and no creaking noise either. So the issue lies in the cheap plastic they decided to use on the "new and improved" A40's. So unless you want a squeaky headset, I would not recommend this headset. The last issue I have with this headset is they advertised this headset as "black". It's not jet back, it's not black it's not even dark gray, it's medium gray. Kinda annoying, it's like if you went to Ikea and they said black brown was sold as true black, which they don't. They label black brown as black brown and black as black.
Read more
6 people found this helpful
Report abuse

Martin
1.0 out of 5 stars Disappointed.
Reviewed in Canada on 13 August 2020
Platform For Display: PlayStation 4Edition: A40 TR + MixAmp Pro TRVerified Purchase
I use this to play on PS4. The sound is good and headset fits comfortably. Unfortunately, I can't give this a 5 star review as I keep experiencing an issue. When I use this headset in a psn party chat, from time to time (2-3 times per gaming session), I hear static/distortion and then party audio/mic cuts out completely. Game sound still works, but party goes dead. I have to unplug the mixamp and plug it back in to reset this. This is extremely annoying, especially when doing activities that require communication. I tried to look for a fix, but all I find are 'update the firmware', and this doesn't solve the issue. A response from the developer with a concrete solution would help.
Read more
One person found this helpful
Report abuse

Shane MacDonald
4.0 out of 5 stars Got XBOX Version Instead
Reviewed in Canada on 15 July 2020
Platform For Display: PlayStation 4Edition: A40 TR + MixAmp Pro TRVerified Purchase
Paid for and asked for this blue PS4 version of the headset and got the red xbox one version instead. I made it work for my ps4 and PC anyways, but still was a little upset. To make it work I just updated the mixer on my PC and kept it on PC mode and did not switch it to xbox. This worked fine for my PS4. In XBOX mode my mic did not register. Next time I hope I receive my correct order, but I made it work. Other than that an amazing headset. Worth every penny.
Read more

Onix1962
5.0 out of 5 stars Excellent Headsets
Reviewed in Canada on 10 December 2019
Platform For Display: PlayStation 4Edition: A40 TR + MixAmp Pro TRVerified Purchase
This has to be one of the best combo (Headset / Amp). the many I/O of the Amp makes this very versatile for any game settings.
The sound quality is excellent.
Read more
2 people found this helpful
Report abuse

Khalil
5.0 out of 5 stars The best headset ever
Reviewed in Canada on 26 December 2019
Platform For Display: PlayStation 4Edition: A40 TR + MixAmp Pro TRVerified Purchase
After trying a lot of headsets, the A40+ the mixamp just set a new standards for me that i will never go below, the surrounding sound provide you with a pin point positioning in FPS games, 10 stars for this one.
Read more
2 people found this helpful
Report abuse
See all reviews
Get FREE delivery with Amazon Prime
Prime members enjoy FREE Delivery and exclusive access to movies, TV shows, music, Kindle e-books, Twitch Prime, and more.
> Get Started
Back to top
Get to Know Us
Make Money with Us
Let Us Help You
And don't forget:
© 1996-2020, Amazon.com, Inc. or its affiliates