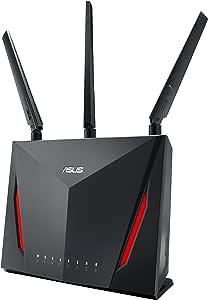 4.5 out of 5 stars
4.5 out of 5
564 global ratings
How are ratings calculated?
To calculate the overall star rating and percentage breakdown by star, we don’t use a simple average. Instead, our system considers things like how recent a review is and if the reviewer bought the item on Amazon. It also analyses reviews to verify trustworthiness.

Morgan
5.0 out of 5 stars Fast and capable, with a great UI made even better when using Merlin's.....
Reviewed in the United Kingdom on 16 December 2017
Model: AC2900 Dual Band AI MESH GamingVerified Purchase
I was a little hesitant at first to buy this router. I typically love an Asus UI, especially with a Merlin firmware.

As my primary need was for a VPN client this newly launched router seemed to have everything needed to make it a super fast capable router when being used with a AES 256bit CBC encrypted data signal. Well it turns out that this router with its super fast optimised dual core CPU is certainly up to the task.

With its ease of setup, using the Merlin firmware, as a VPN client, it is very simple to apply policy based routing. Having devices running through the WAN or the tunnel of the VPN connection, wit ha kill switch, is very easy. As is port forwarding.

Using a smart connection for the excellent Wi-Fi, to combine both the 2.4ghz and 5ghz into one SSID, and then the router allocates the appropriate band to each device, is also both easy to setup and very effective.

There is much more to this router but the little that I have touched on went to convince me that it is a very impressive buy for our needs.

I never did like using DD-WRT or a pf sense box, my brain is far too feeble to cope or manage with those.

So far I am very very happy with the excellent throughput of this router and its massive list of features.

Merlin described it as being .....

and someone noted with their fast VPN connection.....

Based on those results I added only the rcv buffers as the snd buffers lowered the upload speeds.
DL: 223 Mbps
UL: 233 Mbps

HeadBanger
1.0 out of 5 stars Great when working but failing after 16 months
Reviewed in the United Kingdom on 11 April 2018
Model: AC2900 Dual Band AI MESH GamingVerified Purchase
This review is for the Asus RT-AC86U. It’s very hard know which review is for what model here as Amazon appear to have lumped many other model’s reviews together.

I saved down my configuration from my old RT-AC68 (inc DDNS account) and set up the 86U, installed new Merlin firmware and then uploaded settings saved from 68U (isp login, IPTV settings, and Wi-fi settings. Static IPs had to be manually input. Rebooted and everything worked perfectly.

WiFi coverage is significantly improved. We have a Squeezebox radio down in our yard some 65ish feet away from the router (2 internal brick walls, a garden followed by another brick wall to get through) and reported 2.4Ghz strength has gone from ~30% to ~40%. Strength throughout the house (medium sized) is excellent on both 2.4Ghz and 5Ghz bands. Lots of wired clients too (two switches connected) and no issues as expected.

Very happy so far. I will update my review should this change.

Update 2nd Sept 2019. Returned as the 2.4Ghz Wifi is failing with many clients failing to connect and awful speeds if they do manage to connect. A quick internet search confirms that this is a common hardware fault so I did not want to chance a replacement. Shame as really liked this router.
Read more
26 people found this helpful
Report abuse

A. Pessuto
4.0 out of 5 stars Great router, unfortunately unstable firmware when certain features are enabled
Reviewed in the United Kingdom on 5 November 2018
Model: AC2900 Dual Band AI MESH GamingVerified Purchase
I've recently moved to a a new home where the router I had would not reach one of the rooms. After a lot of experimentation and research, I've settled on the ASUS AC86U as it claims great coverage, future proof with the Asus Mesh and the functions provided via Trend Micro such as AiProtection, Traffic analysis and Wi-Fi scheduler.

After 6 months or so, I'm no in a position to review this router and give some feedback.

The only gripe I have with this router is that, when AiProtection or Traffic Analysis or QoS is turned on, the router becomes unstable. Interestingly enough, the router still works as normal, but, if you try to turn off the lights via the router control panel (the physical button), it would not work. Also, the Wifi scheduler stops working. I even tried a scheduled reboot every 1 or two days, to no avail: The issue can manifest itself in a matter of hours in within a few days. Very annoying. Given that AiProtection and Wifi scheduler was one of the key features I wanted this router for, this was somewhat disappointing.

After 3 months, I actually returned the router back to Amazon as faulty and asked for a refund, naively thinking I had a faulty unit as instructed initially by Asus technically support. I then bought the same router again, hoping for the best, but the the exact same issues manifested again. I actually logged a case with Asus, managed to go to the tech. team after a few weeks of bouncing backs and forwards, but I never managed to follow it up all the way. I always keep the router updated to the latest firmware. I have also tried the Asus wrt-Merlin firmware. No good new there either (as expected really, as the Merlin firmware is built on top of the Asus firmware anyway).

So, unfortunately, I simply run the router without AiProtection features on and the router works very well, with a very good range.

Would I have bought this router if I had known all of this in advance? Definitely not.
Read more
13 people found this helpful
Report abuse

Bazza
1.0 out of 5 stars Extremely unreliable
Reviewed in the United Kingdom on 19 June 2018
Model: AC2900 Dual Band AI MESH GamingVerified Purchase
This worked ok for the first couple of weeks, even though the USB disk sharing never settled down. But over a short time it has got worse and worse. It is correctly set up and I’m not doing anything particularly complex with it, mostly just streaming movies from a connected USB drive. Here’s some of the stuff it does.

- continually reboots itself when under any kind of file transfer load
- usb disk sharing is wildly inconsistent and it’s anyone’s guess which drives or folders will appear each time you try
- even with all permissions correctly set, it will regularly throw up access permissions errors for usb drives
- requires rebooting to return operation to anything resembling normal, at least 3 times a day
- it’s not nearly as fast as they claim, even in a small room
- did I mention it constantly reboots itself when you try to transfer files across the network?

I am returning this for a refund.
Read more
4 people found this helpful
Report abuse
See all reviews
Get FREE delivery with Amazon Prime
Prime members enjoy FREE Delivery and exclusive access to movies, TV shows, music, Kindle e-books, Twitch Prime, and more.
> Get Started
Back to top
Get to Know Us
Make Money with Us
Let Us Help You
And don't forget:
© 1996-2020, Amazon.com, Inc. or its affiliates