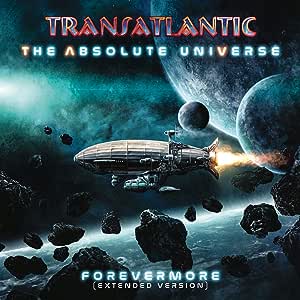 Secure transaction
Your transaction is secure
We work hard to protect your security and privacy. Our payment security system encrypts your information during transmission. We don’t share your credit card details with third-party sellers, and we don’t sell your information to others. Learn more
Details
Ships from
Amazon AU
Sold by
Amazon AU
Absolute Universe: Foreve... has been added to your Cart
New (9) from
$65.56 + FREE Delivery

Transatlantic have never been a band to resist a challenge. So it should come as no surprise that for their fifth album 'The Absolute Universe', Neal Morse Roine Stolt Pete Trewavas and Mike Portnoy have really gone out to do something a little unusual. "We have actually come up with something unprecedented," says Portnoy proudly. "We've got two versions of this album. There's a two CD presentation ('Forevermore'), which is 90 minutes long, and a single one ('The Breath Of Life') - that's 60 minutes. The single CD is NOT an edited version of the double CD. They're new recordings. What we have done are different approaches to the songs for this! We wrote fresh lyrics and have different people singing on the single CD version tracks as compared to those on the double CD. We revamped the songs to make the two versions different. "For this record, the band have also returned to the concept album format: "What we have is essentially one giant composition, split into chapters. The storyline is about the struggles facing everyone in society today" comments Portnoy. "We didn't start out with the idea of this being conceptual," admits Stolt. "The way things work with us is that we have a load of ideas, and these are developed spontaneously when we meet up. Everything happens in the moment." For Trewavas, 'The Absolute Universe' is a momentous project. "I think it is right up there with the very finest albums we've done. "'The Absolute Universe - The Breath of Life' is available as a Limited CD Digipak, Gatefold 2LP + CD & as Digital Album. 'The Absolute Universe - Forevermore' is available as a Limited 2CD Digipak, 3LP+2CD Boxset & as Digital Album. 'The Absolute Universe - The Ultimate Edition' collects both versions together as a Limited Deluxe Clear 5LP + 3CD + Blu-ray box-set, featuring expanded 16page LP-booklet, 5.1 surround sound mix with visuals, making-of documentary, 60x60cm poster - contained within a lift-off box finished with silver foil.

4.6 out of 5 stars
4.6 out of 5
35 global ratings
How are ratings calculated?
To calculate the overall star rating and percentage breakdown by star, we don’t use a simple average. Instead, our system considers things like how recent a review is and if the reviewer bought the item on Amazon. It also analyses reviews to verify trustworthiness.

bpinco
2.0 out of 5 stars Ok
Reviewed in the United States on 17 February 2021
Verified Purchase
I was expecting mike portnoy after 20 years of dream theater. Nothing to be seen here. Songs ok.
Writing ok.
Read more
One person found this helpful
Report abuse

Amazon Customer
5.0 out of 5 stars Vinyl album
Reviewed in the United States on 7 April 2021
Verified Purchase
Amazing album and a great quality copy!!!
Read more
Report abuse
See all reviews
Back to top
Get to Know Us
Make Money with Us
Let Us Help You
And don't forget:
© 1996-2021, Amazon.com, Inc. or its affiliates