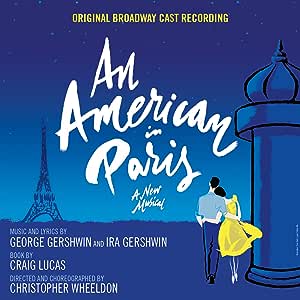 An American In Paris O.B.C.

Inspired by the Academy Award®-winning film, An American in Paris brings this classic tale to Broadway, for the first time, with music and lyrics by George and Ira Gershwin and a book by Tony® and Pulitzer Prize® nominee Craig Lucas. The show is directed and choreographed by Olivier Award® winner and Artistic Associate of The Royal Ballet, U.K., Christopher Wheeldon. An American in Paris is the romantic story of a young American soldier, a beautiful French girl and an indomitable city, each yearning for a new beginning in the aftermath of World War II. The show had its Broadway premiere on April 12 at The Palace Theater.

The brilliant score for An American in Paris includes many well-known Gershwin classics like I Got Rhythm, S Wonderful, But Not For Me, Stairway to Paradise and They Can't Take That Away From Me, with haunting orchestral music including Concerto in F, Second Prelude, Second Rhapsody and An American in Paris. The score was adapted, arranged and supervised by Rob Fisher with orchestrations by Christopher Austin and musical direction by Brad Haak.

4.4 out of 5 stars
4.4 out of 5
164 global ratings
How are ratings calculated?
To calculate the overall star rating and percentage breakdown by star, we don’t use a simple average. Instead, our system considers things like how recent a review is and if the reviewer bought the item on Amazon. It also analyses reviews to verify trustworthiness.

Mr. antony howard
4.0 out of 5 stars Gene Kelly, eat your heart out !!
Reviewed in the United Kingdom on 23 June 2015
Verified Purchase
Not having seen this musical , I can only judge from the musical point of view . It is an adaptation of the well - known MGM film , set here in the aftermath of the 2nd. War in Paris and the show very much concentrates on the dance aspect , having engaged two leading ballet dancers for the lead roles. The Gershwin catalogue has been raided , using other numbers to bolster the original film score and the orchestrations are fittingly of the period without being ' old fashioned '. Don't expect brilliant voices from the two leads - they are, after all dancers - but the supporting roles are sung well and the end result is very pleasing and enjoyable . Whether the show ever comes to London is doubtful but I should put it on my list if that should occur .
Read more
3 people found this helpful
Report abuse

NickG
3.0 out of 5 stars Nice music but no cast album
Reviewed in the United Kingdom on 6 November 2018
Verified Purchase
This no doubt is a nice souvenir of the show for those who saw it but it is not a true cast album. By this I mean that unlike cast albums of original musicals there is no story progression through the music.
Robert Fairchild is a fantastic dancer but a hesitant singer and without the visual aspect of the show to support him this CD is just so-so.

arbetton
5.0 out of 5 stars Tons better than the film!
Reviewed in the United Kingdom on 3 June 2019
Verified Purchase
I saw the show and loved it, but even if I hadn't I would enjoy this recording! It has so many wonderful songs that aren't in the film, and the fact that a lot of the performers aren't professional singers just makes them all the more heartfelt rather than slick. It's wonderful!
Read more
Report abuse

Mjp Mrs Ma Morrow
5.0 out of 5 stars Better than the film score
Reviewed in the United Kingdom on 15 September 2015
Verified Purchase
Terrific recording of a well orchestrated re-working of many pieces from the Gershwin collection. I understand from friends, who are lecturers in theatre studies, that in their view this is the best Broadway production of 2015. Certainly if this recording is anything to go by the dance numbers must have been exciting, vigorous and numerous. Excerpts from his more classically based works make this a fine recording for any collection. Highly recommended and looking forward to seeing the show on its transfer to London.
Read more
One person found this helpful
Report abuse

Terry Davis
4.0 out of 5 stars Wonderful Gershwin
Reviewed in the United Kingdom on 16 September 2017
Verified Purchase
Great music! Great cast! and Gershwin's wonderful music! What more can I say? I found it had much more variety than the film, where most of it revolved around Gene Kelly. Great though he was, the stage show explores more depths to the music.
Read more
Report abuse
See all reviews
Get FREE delivery with Amazon Prime
Prime members enjoy FREE Delivery and exclusive access to movies, TV shows, music, Kindle e-books, Twitch Prime, and more.
> Get Started
Back to top
Get to Know Us
Make Money with Us
Let Us Help You
And don't forget:
© 1996-2021, Amazon.com, Inc. or its affiliates