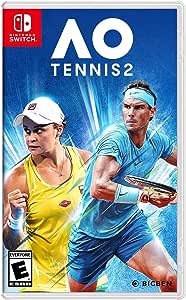 AO Tennis 2 is the only tennis experience designed for and by its community. Create your own players, stadiums and legendary matches. Enter the competition to reach the top of world tennis in Career Mode.

4.2 out of 5 stars
4.2 out of 5
75 global ratings
How are ratings calculated?
To calculate the overall star rating and percentage breakdown by star, we don’t use a simple average. Instead, our system considers things like how recent a review is and if the reviewer bought the item on Amazon. It also analyses reviews to verify trustworthiness.

Tommy M.
3.0 out of 5 stars A step in the right direction, but still a swing and a miss overall.
Reviewed in the United States on 1 March 2020
Verified Purchase
So the bones for a good realistic tennis game are all here, but a lack of overall polish combined with some major gameplay issues make this another mediocre tennis game in its current state. Sadly though, this is still probably the best realistic tennis game I've played since the Grand Slam or Top Spin games, but that's not saying much:

Pros:
- Some of the best customization of any sports game I've ever seen. Between detailed custom players, venues, logos, racquets, etc. all of which can be shared online. That part is absolutely amazing- any player or tennis venue in the world exists to download. I can't emphasize enough how awesome and detailed this is. You could get lost for weeks with it downloaded all the ATP 250, 500, 1000, and grand slam level venues in the world.
- A decent career mode with enough depth using a calender format. Engaging but not overwhelming.
- The bones of the controls are a cool idea, but some major issues which I'll detail below.
- Overall presentation and sound is good. Player reactions, match pregame, stat tracking, and camera shots are are fun. We could use a little more life in the crowd and on court ball kids/officials. I actually like not having annoying announcers, but maybe adding them between games or pre/post match would add some engagement.

Cons:
- Online mode exists, but I haven't found a single player to match with.
- Some major graphical hiccups that at times make the game look bad. Most common examples are teansitions between points, and random low poly/blurry player models and logos during gameplay.
- Some occasional stutters between points as well. Not a big deal, but enough to be distracting.
- Career mode can be quirky with players retiring too soon, and unnecessary performance downgrades after losing matches.
- Gameplay needs major tuning. Baseline play is extremely difficult, even in low levels, and doubles net play is not responsive enough to the point that is borderline not playable.

The customization alone makes this fun if you're a die hard tennis fan, but if not, I can't recommend this game to the average player until some major issues are fixed.

I trust everyone says that these games get lots of at launch support. As a big tennis and video game fan, it's just frustrating that I've waited close to a decade for an all around acceptable tennis game, and this just doesn't cut it, even if a lot of the peices are in place.
Read more
9 people found this helpful
Report abuse
See all reviews
Get FREE delivery with Amazon Prime
Prime members enjoy FREE Delivery and exclusive access to movies, TV shows, music, Kindle e-books, Twitch Prime, and more.
> Get Started
Back to top
Get to Know Us
Make Money with Us
Let Us Help You
And don't forget:
© 1996-2020, Amazon.com, Inc. or its affiliates