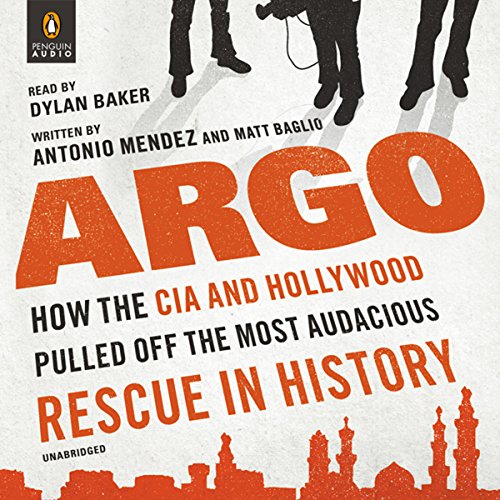 Argo: How the CIA and Hollywood Pulled Off the Most Audacious Rescue in History

On November 4, 1979, Iranian militants stormed the American embassy in Tehran and captured dozens of American hostages, sparking a 444-day ordeal and a quake in global politics still reverberating today. But there's a little-known footnote to the crisis: six Americans escaped. And a midlevel agent named Antonio Mendez devised an ingenious yet incredibly risky plan to rescue them.

Armed with foreign film visas, Mendez and an unlikely team of CIA agents and Hollywood insiders - directors, producers, actors - traveled to Tehran under the guise of scouting locations for a fake film called Argo. While pretending to find the perfect scenery and backdrops, the team succeeded in contacting the escapees and smuggling them out of Iran without a single shot being fired.

Antonio Mendez finally details the mind-bogglingly complex and dangerous operation he led more than three decades ago. A true story of secret identities and international intrigue, Argo is the gripping account of the history-making collusion between Hollywood and high-stakes espionage.

Read more
©2012 Antonio Mendez and Matt Baglio (P)2012 Penguin Audiobooks
Previous page
Next page
Learn more about membership
By completing your purchase, you agree to Audible’s Conditions Of Use and Privacy Notice.
Sold and delivered by Audible, an Amazon company

4.5 out of 5 stars
4.5 out of 5
607 global ratings
How are ratings calculated?
To calculate the overall star rating and percentage breakdown by star, we don’t use a simple average. Instead, our system considers things like how recent a review is and if the reviewer bought the item on Amazon. It also analyses reviews to verify trustworthiness.

Lucy Loo
4.0 out of 5 stars Awesome Argo
Reviewed in the United Kingdom on 13 April 2013
Verified Purchase
It is strange to read of things, now history that have happened in my lifetime. Found this bit of history compelling reading though. The attention to detail in planning and executing this mission is breathtaking and although I knew the outcome, found the actual extraction of the house guests riveting reading. It only got four stars because there is a little bit to much self appreciation (in my view) from Mendez. I look forward to seeing the film
Read more
Report abuse

Discover
4.0 out of 5 stars Amazing
Reviewed in the United Kingdom on 6 January 2013
Verified Purchase
Although not exciting till towards the end , this is a detailed account of an amazing rescue situation in a hostile country. A bit slow and documentry style writing to start, but gradually hots up to the climax of the rescue, putting the reader on "The edge of your Seat". Now a film, recommend you read the book, you will enjoy a bit of recent history not widely known until now.
Read more
Report abuse

Amazon Customer
4.0 out of 5 stars Interesting insight into the workings of the CIA
Reviewed in the United Kingdom on 28 May 2013
Verified Purchase
A real "from the horse's mouth" account of a major CIA operation, although the style is fairly pedestrian. Somehow the tension never builds, but in a way that makes it more believable. Here is a small team going about their business in a measured way, and that is how the account comes across. I guess knowing the outcome doesn't help!
Read more
Report abuse

D TAIT
3.0 out of 5 stars Not as good as anticipated
Reviewed in the United Kingdom on 3 March 2013
Verified Purchase
Having heard the reviews of the film of the same name, I was disappointed in the ponderous rate of storytelling. Whilst I understand that some aspects of the operation are still classified, too much was left to the reader's imagination. There were far too many holes left unexplained that needed imaginative filling-in on my part.
Read more
2 people found this helpful
Report abuse

Jillian
5.0 out of 5 stars AMAZING - LOVED EVERY PAGE!
Reviewed in the United Kingdom on 10 December 2012
Verified Purchase
This was a fantastic book, I was hooked from the minute I picked it up until the second it ended. This book had everything in it that you expect from a hollywood style spy film, the best parts however were the fact that it was all true and the author even included the mundane everydayness of the spy world. I would recommend this book to anyone looking for an insiders guide to the spy world!
Read more
Report abuse
See all reviews