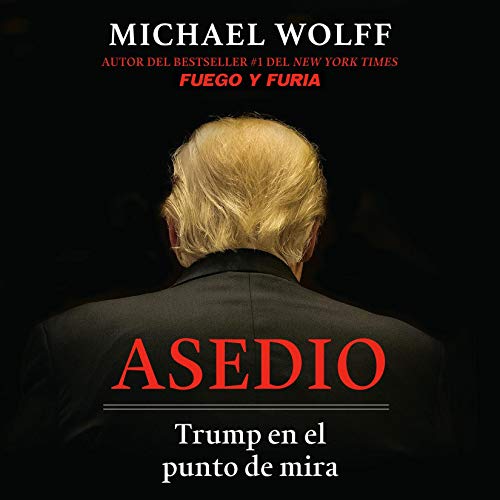 Michael Wolff, author of the bombshell best seller Fire and Fury (Fuego y Furia), once again takes us inside the Trump presidency to reveal a White House under siege.

With Fire and Fury, Michael Wolff defined the first phase of the Trump administration; now, in Asedio, he has written an equally essential and explosive book about a presidency that is under fire from almost every side. A stunningly fresh narrative that begins just as Trump's second year as president is getting underway and ends with the delivery of the Mueller report, Siege reveals an administration that is perpetually beleaguered by investigations and a president who is increasingly volatile, erratic, and exposed.

Please note: This audiobook is in Spanish.

Read more
©2019 Michael Wolff (P)2019 Random House Audio
Learn more about membership
By completing your purchase, you agree to Audible’s Conditions Of Use and Privacy Notice.
Sold and delivered by Audible, an Amazon company
Share

3.9 out of 5 stars
3.9 out of 5
17 global ratings
How are ratings calculated?
To calculate the overall star rating and percentage breakdown by star, we don’t use a simple average. Instead, our system considers things like how recent a review is and if the reviewer bought the item on Amazon. It also analyses reviews to verify trustworthiness.

alberto
3.0 out of 5 stars good
Reviewed in the United States on 8 August 2019
Verified Purchase
is good for the price
Read more
Report abuse

Periodistaguevara
5.0 out of 5 stars Bueno.
Reviewed in the United States on 23 April 2020
Verified Purchase
Excelente libro
Read more
Report abuse
Translate review to English
See all reviews
Back to top
Get to Know Us
Make Money with Us
Let Us Help You
And don't forget:
© 1996-2021, Amazon.com, Inc. or its affiliates