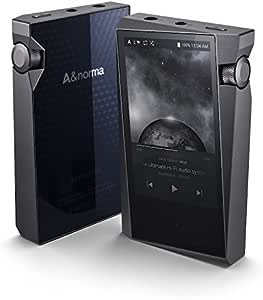 Brand: Astell&Kern
4.3 out of 5 stars 22 ratings
Currently unavailable.
We don't know when or if this item will be back in stock.

A&norma sets the standard of Hi-Fi audio for novice listeners. The SR15, the first model of A&norma, is the beginning point of the Hi-Fi Audio experience that allows you to enjoy the philosophy and technologies of Astell&Kern, which is accolated by audiophiles around the world.

The SR15 is the first model of Astell&Kern's newly introduced standard line.

4.3 out of 5 stars
4.3 out of 5
22 global ratings
How are ratings calculated?
To calculate the overall star rating and percentage breakdown by star, we don’t use a simple average. Instead, our system considers things like how recent a review is and if the reviewer bought the item on Amazon. It also analyses reviews to verify trustworthiness.

Amazon Customer
1.0 out of 5 stars Bluetooth sucks, WiFi doesn’t work, sound is just ok. What’s the point?
Reviewed in the United States on 16 February 2019
Verified Purchase
2/17/19 Update: Wait, there’s more...
On top of all that, the WiFi is awful! Why would they make a $700 product with such horrible hardware? I’ve been forced to use my iPhone XS for streaming, downloading and listening because I can’t get this thing to work via WiFi or Bluetooth. And AK Connect? Not even close, won’t AK Connect to anything. And since it doesn’t have cellular, I’m forced to use a device that does. I’m on a work trip, spent this amount of money thinking I’d have awesome tunes, but all I’ve done is waste my time on this probably $5 piece of garbage that AK sells for $699 plus tax!!!! I’m so mad! Seriously AK, what’s up with this hooptie?
1) Bluetooth just does not work at all and will not pair to my headphones or any devices
2) with my campfire audio Vega, sound is meh, bass is lacking, highs are sharp and clear, but shrill at times. Better on my iPhone XS.
3) battery power drops quickly even if powered on but not in use. Power has dropped from 96% to 88% in 15 mins without any use at all, except trying several times to connect via Bluetooth to my headphones without success. Charged to 100% last night, powered off, turned on today and it was 93%. Used it for 30 mins only trying to download music for a flight, but WiFi just wouldn’t connect; therefore no downloads, and now battery is at 84%. Tried Bluetooth again and it worked for a hot minute, but what’s the point if I can’t download apps or stream music? Just a pretty thing to hold in my hand? SMH...
4) for $700, this is an epic fail, Astell & Kern

c. lam
4.0 out of 5 stars Great sound, but mine has a problem
Reviewed in the United States on 6 September 2018
Verified Purchase
The look and feel of that is fine for me. But the most important things are the sound quality and everyday usability. This is my first adventure into hi-res audio, so I decided to simply plunge into this premium brand hoping that this will be it. After charging it to full capacity and did the initial settings, I was perplexed to find that playing the internal sample tracks, there's no sound coming from my se846. I took the time to read the manual and explore the settings but none of these helped. I even have to use my ipod to make sure that my 846 is working fine. Ultimately, a System Reset -> Settings reset solved the problem. I loaded a couple of my own tracks and was truly amazed with the clarity, sound stage, details, etc. etc.

Come dinner time, and it auto powered off after half an hour. However, when I turned it back on, no sound again. This made me anxious. Turn it off and on brought back the sound. Then I deliberately tested by letting its auto power off kick in. Surely enough, same problem, and same procedure to bring it back.

I decided this maybe just a simple glitch of the firmware that may yet to mature. Who needs auto power off anyway. It can simply pause and play as long as the battery drain is acceptable. At night, I turned off auto power off setting, paused the music, and went to sleep. Six hours later, I was happy to find that total batter drain only went down from 98% to 96% which is totally okay. BUT, while the screen turn on instantly, hitting the play button produce no sound again! This time, 2 power off/on cycles had to be used to bring it back. To make a long story short, I did several more tests, and found that as long as it paused for about an hour or longer, the sound will disappear. The last straw was that I had to power cycle it four times (!) during the last test to bring the sound back.

This is surely a defect somewhere, let's just hope I am the only one getting such a problem with this premium brand. Having said that, at this time I am kind of lost some confidence in it and I decided to return it instead. And in the meantime, I will have to research again for offerings from other manufacturers. Because, there is no going back to ipod and phone after this!

Pros: Definitely noticeable amazing sound quality!!!
Cons: Something's wrong with the output to 3.5mm jack after stopping it for an extended amount of time.
Note: I didn't try the other outputs and features.

Emre Isiklar
5.0 out of 5 stars Small wonder
Reviewed in the United States on 20 February 2019
Verified Purchase
I am a user of SP1000 the big brother as well as the Sony WM1Z, this one is my mobile one. Very good sound, good interface and it has Tidal offline as well with MQA capability. There are many Chinese alternatives but non of them have the operation system and build quality of this one, no problems at all. The battery life is not 10+ but like 7-8 depending on your setup, it gets little warm while charging but nothing alarming. Sounds excellent as well. So if you want a poachable device with no problems and Tidal Offline this one is very bu very good alternative. hybi R3 also is nice but no Tidal Offline, M0 Shangling is very small with a disaster of a OS so this is the one.
Read more
13 people found this helpful
Report abuse

Frank W. Spencer
5.0 out of 5 stars Outstanding!
Reviewed in the United States on 30 August 2018
Verified Purchase
I had purchased an LG V30 to replace my iPhone as I was interested in getting better mobile audio performance. The LG 30 was a big improvement, but I felt I could do better with a dedicated player with a more powerful amp (driving custom Empire Audio IEMs). Took the plunge on this entry level A&K player. Wow! What a step up. Not sure what I'm hearing -- better DAC or better headphone amp or both, but the player is very detailed without losing any musicality. Set up/ start up is a breeze. Appears to be no streaming option for Spotify only Tidal. That's OK with me as long as Tidal is around. Highly recommended.
Read more
12 people found this helpful
Report abuse

Business Owner
5.0 out of 5 stars Works with both Mac and PC! Amazing device!
Reviewed in the United States on 2 March 2019
Verified Purchase
First, it works with Mac!!! You just have to download the android file transfer driver. There are clear instructions in the SR15 manual. IT WORKS WITH BOTH PC AND MAC!

Great audio player. Less wider than the AK120 but slightly taller. This is my second high definition audio player. My first was Astell & Kern AK120 which was a great intro player. This unit, the SR15, has that signature Astell & Kern sound. Clear highs, mids and lows. Definitely blows away listening to music on the iphone. I also love how it’s portable and I can take it on runs and to the gym. I recommend getting the SR15 case cos it doesn’t come with one.
Read more

5 people found this helpful
Report abuse
See all reviews
Get FREE delivery with Amazon Prime
Prime members enjoy FREE Delivery and exclusive access to movies, TV shows, music, Kindle e-books, Twitch Prime, and more.
> Get Started
Back to top
Get to Know Us
Make Money with Us
Let Us Help You
And don't forget:
© 1996-2020, Amazon.com, Inc. or its affiliates