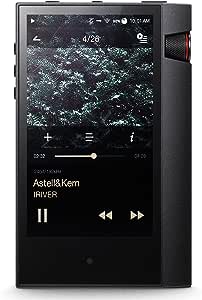 Brand: Astell&Kern
4.0 out of 5 stars 30 ratings
Secure transaction
Returns Policy
Your transaction is secure
We work hard to protect your security and privacy. Our payment security system encrypts your information during transmission. We don’t share your credit card details with third-party sellers, and we don’t sell your information to others. Learn more
Currently unavailable.
We don't know when or if this item will be back in stock.

The AK70's DAC, based on market-proven CS4398 chips of Cirrus Logic, has been used for years in Hi-Fi audios and the second-generation Astell&Kern devices. The AK70 plays back 24bit 192kHz signals into bit-to-bit type. 32bit audio is downsampled using a sample-rate converter.

The AK70 supports the 2.5-mm 4-pole balanced output (2.3 Vrms) that has been in use since the second generation of the Astell&Kern players.

Unlike the unbalanced type, the balanced output type is capable of removing noise (common mode noise) that can occur in “signal + inverting amplifier signal” and has the strength of increasing output due to its double transmitting signals.

You can connect diverse digital-input portable amps through USB to the AK70. The AK70 can transfer DSD in native through DoP. It can also convert DSD into PCM for output for portable amps that do not support DoP.

The AK70 can be used with a USB DAC that can double as an embedded sound card by connecting with a PC/Mac through the USB port.

In the case of using the PC's embedded sound card, one may have to go through a complicated process to play back DSD data. In contrast, the AK70 can do so simply by connecting with the PC.

In the case of using the AK70 as a USB DAC, it can support up to 24-bit 96 kHz bit to bit, providing much richer sound through superior ambience and resolution way beyond the limits of an embedded sound card.

The AK70 can allow users to rip CDs with ease by linking with the AK CD-RIPPER.

By inheriting from the AK500N, it supports the CD track error correction feature and the meta data (ID3TAG) auto input feature using Gracenote's database without any change.

The AK70 comes equipped with the AK Connect feature that can be connected with network-ready Astell&Kern devices.

It is also appointed with wireless networking DLNA (Ver. 1.0), which makes it easy to work with NAS/PC on the same network and through an AK Connect app supporting smartphone/tablet computer.

NOTE: Use the inbuilt EQ to custom tune sound to user’s preference

The AK CD-RIPPER may not be properly recognized when using a power supply adapter rated at less than 5V 2A.

Mike C
5.0 out of 5 stars A worthy upgrade!
Reviewed in the United Kingdom on 29 July 2017
Verified Purchase
So i bought the AK70 as an upgrade from the AKJR. though i wouldn't say the differences are huge, they are definitely welcome.. The build quality on this thing is really great, it has a nice amount of weight to it, which adds to the overall solid feel of the unit. It has a very simple elegant design and i personally quite like the sharp edged design of Astell & Kern's players (i know some don't)) i think it makes the product feel more tactile. The player is deceptively small. When i saw images of it online i thought it was much larger than it is, it's actually not much bigger than the palm of my hand (i don't have big hands!).
So why upgrade from the AKJR...?. Let me start by saying that i really liked the AKJR, it was nice and compact and the sound quality was really great. My main complaint was that the battery life was truly terrible, i was lucky to get much more than 4 hours out of it and that's with all energy saving options enabled playing a mix of Flac and 320kbps MP3's. The UI was also a bit clunky, though not terrible.
For a start i have noticed that the battery life on the AK70 is much better. I'm averaging around 7-8 hours which, while still not great, is a welcome improvement over the AKJR. The sound quality has some small enhancements over the AKJR, which is hard to clarify here as i don't have both units side by side to A-B compare. I feel like the AK70 has a wider sound stage and a slightly clearer presentation overall. I don't think the differences in sound quality are worlds apart, but they are welcome non the less. The screen on the AK70 is way better than the AKJR, It runs fluidly and at a much higher resolution. The exterior functions are much the same as the AKJR which i like.
Over all this is a fantastic hi res audio player. If you partner it with a great pair of headphone then you are in for a real treat. I'm currently using it with a pair of B&O play H6's for portable use and Philips Fidelio x1's for indoor home use and i am more than happy with the listening experience.
At £499 it's not going to be for everyone (i actually struggled to justify it) but i have to say i'm glad i took the plunge. Fantastic!!!

Chris Matthews
5.0 out of 5 stars first class audio player with provision for micro SD card upgrade.
Reviewed in the United Kingdom on 13 April 2019
Verified Purchase
This portable audio player is first class as i have all my music on two of these players, the sound is perfect and the controls are simple to follow, and transferring music from my computer to the player was straightforward. The player is not cheap, but then again you only get what you pay for.
Read more
Report abuse

A. Angus
5.0 out of 5 stars Sounds great
Reviewed in the United Kingdom on 5 August 2017
Verified Purchase
I was wondering if this would sound a lot better than an iPhone 7. It definitely does!
Read more
3 people found this helpful
Report abuse

Jay
5.0 out of 5 stars Much better than my phone.
Reviewed in the United Kingdom on 30 November 2018
Verified Purchase
Have always been a vinyl fan but can't carry those around and listen to them. The quality and clarity of sound is amazing. If you love your music then ditch your phone.
Read more
2 people found this helpful
Report abuse

Peter W.
2.0 out of 5 stars Headphone socket poor quality. No UK backup.
Reviewed in the United Kingdom on 8 September 2019
Verified Purchase
This was a very disappointing purchase. Initially I was pleased with it. I paired it with some decent Oppo headphones and enjoyed the sound quality. 2 years later, the headphone socket became faulty and, despite my best efforts, I cannot get it repaired in the UK. It seems that I am not alone. This is a weakness with the product. An expensive mistake. You have been warned.
Read more
Report abuse
See all reviews
Get FREE delivery with Amazon Prime
Prime members enjoy FREE Delivery and exclusive access to movies, TV shows, music, Kindle e-books, Twitch Prime, and more.
> Get Started
Back to top
Get to Know Us
Make Money with Us
Let Us Help You
And don't forget:
© 1996-2020, Amazon.com, Inc. or its affiliates