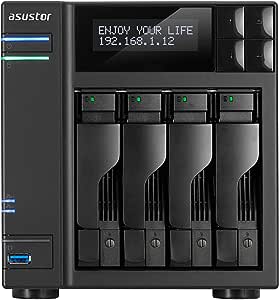 Visit the Asustor Store
3.3 out of 5 stars 11 ratings
Secure transaction
Returns Policy
Your transaction is secure
We work hard to protect your security and privacy. Our payment security system encrypts your information during transmission. We don’t share your credit card details with third-party sellers, and we don’t sell your information to others. Learn more
Available from these sellers.

A comprehensive 4 Bay NAS equipped with an Intel Celeron (Apollo Lake) quad-core processor for powerful 4K output. Economical and perfect for both home and personal use.

3.3 out of 5 stars
3.3 out of 5
11 global ratings
How are ratings calculated?
To calculate the overall star rating and percentage breakdown by star, we don’t use a simple average. Instead, our system considers things like how recent a review is and if the reviewer bought the item on Amazon. It also analyses reviews to verify trustworthiness.

SHM
1.0 out of 5 stars Asustor – flawless 5 star product with a 1 star software limitation – no syncing apps
Reviewed in the United States on 29 April 2020
Verified Purchase
The following is from a support ticket / dead-end road with Asus. Basically it amounts to this simple fact:
If you connect this to a new workstation with 2.5GBe or 10GBe capability and buy the $45 Asustor 2.5Gbe USB-C adapter you'll be fine for having your computer be able to Sync files at the full 200MBps speeds your hard drives, and this NAS, are capable of. And you'll be happy. However, if you want to connect to the NAS and try any type of file management, WITH decent sync capabilities, there is currently no such application for any Linux based NAS that will work. So you'll have to deal with slow wireless speeds (20MBps or less) since you can't Sync internally from within the NAS to achieve high data transfer speeds. It will be abysmally slow until GoodSync or FreeFileSync or AllWaySync, creates an app for the Asustor to run direct / internally.

So, even though the poor file manager with no sync option is abhorrent to me – coming from a Windows background, otherwise this NAS has been a true powerhouse and worthy of every penny spent. Amazingly fast, durable, and very fun to work with.

Asus tech support,
I’ve given up on trying to get the Linux Central / Debian Desktop app to give me root access to my NAS so i could use FreeFileSync and eliminate all of my file sync speed issues in syncing files from my RAID1 to all of MyArchive drives. It has been very time consuming and frustrating! Granted, i didn’t post this to your forums because i thought for sure one of your techs might have seen this and have an easy solution or better idea. I will be posting it to your forums now so others can make suggestions (or belittle me). I am not happy at all about Asustor having just the absolute best hardware, while also excelling at almost every feature, but totally pure garbage when it comes to basic file management. I do admit almost all other NAS devices are also Linux based and would also more than likely, be dismally pathetic in file management as well. Only a Windows bases NAS would offer me the file sync functionality of GoodSync, FreeFileSync, AllWaySync, etc. I do not trust transparent, automated / non-visual file tree, non-logged file syncing. In my opinion, these are just stupid file mirroring programs and NOT file syncing programs by any stretch of the imagination and i wish they would quit calling themselves “Sync” programs when they don’t sync crap. All the other so-called Sync applications are only dumb mirroring applications with no visual reference to monitor file changes at all.

I see no other option than to spend $1500 on a nice workstation computer and then $45 for an Asustor 2.5Gbe USB-C adapter to the back of my AS6404T; with another $100 for an Asus PCI-e 10Gbe adapter card; plus $20 for a short CAT-8 Ethernet cable. I will then have to remote into this direct connected computer via one of my laptops and use GoodSync and/or FreeFileSync on the workstation to do the job that my Asustor is totally failing at any capacity to do decently.

I would rather spend the $1600 on a new Asustor AS6508T, to compliment my current NAS. Or, better yet $200 for a license for FreeFileSync or GoodSync – if they would build an app that would run right from my Asustor. However, i just can’t seem to find any other option to get me to the desperately needed 200MBps hard drive transfer speeds and away from the bottleneck speeds due to me using FreeFileSync or GoodSync applications from my laptop through my wireless router.

In the meantime i’ll just buy a new desktop workstation and configure it to wake on LAN and hibernate or sleep to conserve electricity. It’s a horrendous waste of money and electricity. Had i known Linux bases NAS devices can’t do basic file syncing, and are comparable to Windows 3.1 or DOS days, i would have just built my own Windows based NAS in the first place.

I will be leaving a 1 star review on Amazon for this product to elicit awareness. But i will also be honest about how phenomenal the product has been otherwise. I don’t want to sell my Asustor and buy a Thecus Windows based NAS either (https://www.amazon.com/Thecus-W4810-Celeron-Windows-Included/dp/B01MAX5NHZ), since i’m sure it won’t come close to the quality and feature of the Asustor. So, my review title will be “Asustor – flawless 5 star product with a 1 star software limitation – Liinux-based NAS syncing appliances suck for now”. Sure, it could be construed as my fault for not wanting to buy the needed upgrades to get my 6404t to 2.5Gbe or 10Gbe and sure, my fault again for not wanting to sit all day long in front of my hard-wired desktop computer instead of working from WiFi connected laptops. But, i still am flat out flabbergasted that Asustor, or Linux, doesn’t offer a decent file sync option for root hard drive files to the root MyArchive drives. I shouldn’t have to put everything on the cloud just so i can get 10+ different applications that might start working almost as well as GoodSync does.

Please close this ticket as resolved. I’ll keep emailing FreeFileSync and GoodSync to someday make an app for the Asustor to fix this MASSIVE Achilles-heal weakness that Asustor, or any other Linux based NAS, has an applicable solution for. I’ve tried using MidnightCommander for file syncing. And while it does work within the NAS / 200MBps transfer speeds, it is just far too limited in features and interface, compared to FreeFileSync and GoodSync, to be of any appreciable value.
Read more
3 people found this helpful
Report abuse

B
1.0 out of 5 stars DO NOT trust asustor
Reviewed in the United States on 14 June 2020
Verified Purchase
Horrendous experience. Am an extremely skilled PC guy for 25 years. Installed this and never got the system to see it. None of their apps worked. Spent THREE days trying EVERYTHING in their weak manuals, weak forum, and lame database as well as all around the web for NAS issues in general. Tons of tweaks, fifty restarts, All the while their tech support, solely on China time, utterly failed to give me any help on any level about anything. Days after day, nothing. I would have paid $200 just NOT to have bought this. This is a company that has not figured out the Windows 10 PC NAS nexus and has no clue about customer service. They lost me for life for simply not giving me ONE idea of what to try. Their vendors just shrug and say you have to talk to them. Why bother? Atrocious experience. Feel robbed.
Read more
2 people found this helpful
Report abuse

Mert
3.0 out of 5 stars Good NAS
Reviewed in the United States on 28 August 2018
Verified Purchase
Its a good NAS but you cant play directly 4K 10bit HDR movies. There is no information about it. When i bought it, it has official KODI support by Asustor but now they end KODI support. Somehow you can install and use it but you can not update KODI anymore.
Read more
5 people found this helpful
Report abuse
See all reviews
Get FREE delivery with Amazon Prime
Prime members enjoy FREE Delivery and exclusive access to movies, TV shows, music, Kindle e-books, Twitch Prime, and more.
> Get Started
Back to top
Get to Know Us
Make Money with Us
Let Us Help You
And don't forget:
© 1996-2020, Amazon.com, Inc. or its affiliates