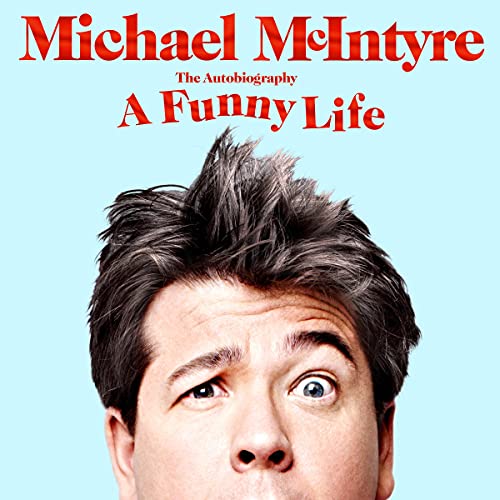 Michael McIntyre (Author, Narrator), Macmillan (Publisher)
4.5 out of 5 stars 33 ratings
See all formats and editions
Sorry, there was a problem loading this page. Try again.

Laugh along with Michael McIntyre as he lifts the curtain on his life in his long-awaited new autobiography.

Michael’s first book ended with his big break at the 2006 Royal Variety Performance. Waking up the next morning in the tiny rented flat he shared with his wife, Kitty, and their one-year-old son, he was beyond excited about the new glamorous world of show business. Unfortunately, he was also clueless....

In A Funny Life, Michael honestly and hilariously shares the highs and the lows of his rise to the top and desperate attempts to stay there. It’s all here, from his disastrous panel show appearances, to his hit TV shows, from mistakenly thinking he’d be a good chat show host and talent judge, to finding fame and fortune beyond his wildest dreams and becoming the biggest-selling comedian in the world. Along the way, he opens his man drawer, narrowly avoids disaster when his trousers fall down in front of three policemen and learns the hard way why he should always listen to his wife.

Michael has had a silly life, a stressful life, sometimes a moving and touching life, but always a funny life.

This audiobook is hilariously read by Michael McIntyre himself.

Read more
©2021 Michael McIntyre (P)2021 Macmillan Publishers International Limited
Learn more about membership
By completing your purchase, you agree to Audible’s Conditions Of Use and Privacy Notice.
Sold and delivered by Audible, an Amazon company
Share

4.5 out of 5 stars
4.5 out of 5
33 global ratings
How are ratings calculated?
To calculate the overall star rating and percentage breakdown by star, we don’t use a simple average. Instead, our system considers things like how recent a review is and if the reviewer bought the item on Amazon. It also analyses reviews to verify trustworthiness.

Anne Battle
5.0 out of 5 stars Loved this book!
Reviewed in Australia on 13 November 2021
Verified Purchase
When I read Michael’s first book (which I only discovered this year), I was taken on a journey through his writing, laughing and crying. I was so thrilled to find out he was releasing another book pre-ordered and waited somewhat patiently. I couldn’t wait to continue reading after I had to do life stuff. Thank you for sharing your journey Michael, come back to Australia ASAP! Health and happiness to you and your family.
Read more
Helpful
Report abuse

Jackie
5.0 out of 5 stars I never thought 'funny' could be inspiring, until I read Michael's two books.
Reviewed in Australia on 20 October 2021
I listened to the audio of this book (pre-ordered xx) and, as with his book Life and Laughing, know I'll read it many more times. Such an inspirational life and I so respect the way he honours his friend Addison. Well written, well voiced by Michael, with some fun intermissions along the way. He did not disappoint.
Anyone on a journey of finding their gift and wanting to fight to 'make it' will love reading this book.
Read more
Helpful
Report abuse
See all reviews

Blue and white
5.0 out of 5 stars Another Xmas present ticked off my list.
Reviewed in the United Kingdom on 29 October 2021
Verified Purchase
I can’t comment on this I’m afraid, as it’s part of the BFF’s hubby’s Xmas present. I do know he’ll like it though, as Michael McIntyre is a particular favourite of his, plus he loves autobiographies. Plus I like giving books as presents…they’re so much easier to wrap!
Read more
5 people found this helpful
Report abuse

andreav
5.0 out of 5 stars Thoroughly funny and honest
Reviewed in the United Kingdom on 15 October 2021
Verified Purchase
I really enjoyed reading about Michael’s fears and dreams and experiences.
Well worth reading over and over again .

Mardybra
5.0 out of 5 stars Fascinating
Reviewed in the United Kingdom on 15 November 2021
Verified Purchase
I loved this book so much I read it too fast. It's so interesting, honest and funny that I had to stop myself reading it all in one go. It's a brilliant insight into the mind of a comedian and fascinating to discover what was going on in his head during his meteoric rise to success. I wish I could find another book as enjoyable as this to fill its place.

What a lovely tribute to Addison as well - the world of comedy must be a sadder place without his energy and vision.
Read more
Report abuse

William H.
5.0 out of 5 stars Typical McIntyre book full of scatty humour.
Reviewed in the United Kingdom on 30 October 2021
Verified Purchase
Enjoyed this book which I found slow to start, but picked up and was very funny.
His relationship with his mentor Addison which was documented with great empathy, allows McIntyre to open up,and in fact find himself.Enjoy this man immensly.
Read more
One person found this helpful
Report abuse

Kezzad
5.0 out of 5 stars brilliant and funny
Reviewed in the United Kingdom on 25 October 2021
Verified Purchase
Heartfelt and honest account of his road to success. Loved this book and highly recommend. Can’t wait to see him more on tv doing what he is good at stand up
Read more
One person found this helpful
Report abuse
See all reviews
Back to top
Get to Know Us
Make Money with Us
Let Us Help You
And don't forget:
© 1996-2021, Amazon.com, Inc. or its affiliates