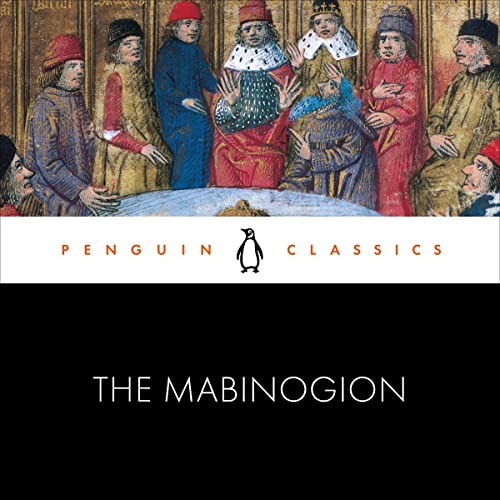 Drawing on myth, folklore and history, the stories of the Mabinogion passed from generations of story tellers before they were written down in the 13th century in the form we know.

Set in dual realms of the forests and valleys of Wales and the shadowy otherworld, the tales are permeated by a dreamlike atmosphere. In 'Math Son of Mathonwy', two brothers plot to carry off the virginal Goewin, while in 'Manawydan Son of Llŷr', a chieftain roams throughout Britain after a spell is cast over his land. And King Arthur's court provides the backdrop to tales such as 'How Culhwch Won Olwen', in which a young man must complete many tasks before he can marry a giant's daughter.

Read more
©1976 Jeffrey Gautz (P)2022 Penguin Audio
Previous page
Next page
Final days - Don't miss out!
Learn more about membership
By completing your purchase, you agree to Audible’s Conditions Of Use and Privacy Notice.
Sold and delivered by Audible, an Amazon company

4.6 out of 5 stars
4.6 out of 5
88 global ratings
How are ratings calculated?
To calculate the overall star rating and percentage breakdown by star, we don’t use a simple average. Instead, our system considers things like how recent a review is and if the reviewer bought the item on Amazon. It also analyses reviews to verify trustworthiness.

Mr. Louis Des Preaux
3.0 out of 5 stars Interesting because of its famed origins
Reviewed in the United Kingdom on 22 May 2019
Verified Purchase
This book is very interesting, but I found it disappointing. That is probably my fault because I had always heard how important it was because of its origins. It was the basis of Evangeline Walton's books,"The Island of the Mighty" (originally published as "The Virgin and the Swine"!) and "The Children of Llyr". As a school-boy in Tasmania, (1950s) our Form IV master, Edward Brown, a former RAF navigator, read us his "Bran and Branwen" which he had written. Even normally bored school boys found it fascinating. It was based on the Mabinogion, but as far as I can find out was refused publication as "too advanced for children". So, perhaps, my disappointment is unreasonable. Source books can be disappointing --- but that is only my opinion --- sources are important. If you like legends and myths, it is still well worth reading.
Read more
One person found this helpful
Report abuse

david
5.0 out of 5 stars classic work of literature
Reviewed in the United Kingdom on 24 October 2014
Verified Purchase
This is a classic textbook for students of Welsh language and history
Read more
One person found this helpful
Report abuse