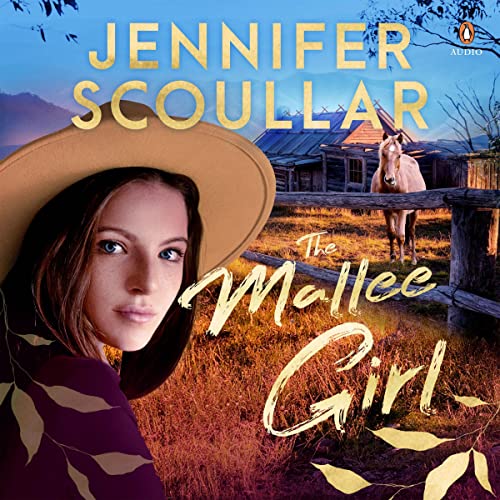 Armed with nothing but some loose change and her beloved dog Duke, Mallee girl Pippa Black has finally found the courage she needs to escape a dangerous relationship. Two cryptic words written on a paper napkin send her in search of the one person who might help her—a long-lost brother she has always dreamed of finding.

Pippa's quest leads her to the remote town of Currajong, high in the beautiful Victorian alps. As a runaway seeking refuge among strangers, Pippa learns that she's been mistakenly implicated in a shocking crime. She finds her way to Brumby's Run, a wild-horse sanctuary, where she begins work assisting the enigmatic farm manager Levi and becomes entranced by Thowra, a magnificent golden stallion who leads a herd of brumbies in the region. Both man and horse will teach Pippa more about herself than she ever thought possible—including when to run, when to hide and when to stand up and fight.

Set among the majesty of the High Country snowgums, The Mallee Girl is a moving and heartfelt story about the power of love and the land to heal old wounds and the freedom that comes in confronting your greatest fears.

Switch between reading the Kindle book & listening to the Audible narration with Whispersync for Voice.
Get the Audible audiobook for the reduced price of $14.99 after you buy the Kindle book.
Final days - Don't miss out!
Learn more about membership
By completing your purchase, you agree to Audible’s Conditions Of Use and Privacy Notice.
Sold and delivered by Audible, an Amazon company

4.5 out of 5 stars
4.5 out of 5
49 global ratings
How are ratings calculated?
To calculate the overall star rating and percentage breakdown by star, we don’t use a simple average. Instead, our system considers things like how recent a review is and if the reviewer bought the item on Amazon. It also analyses reviews to verify trustworthiness.

Amazon Customer
5.0 out of 5 stars Stunning High Country - majestic Brumby’s
Reviewed in Australia on 20 April 2022
What a brilliant read - I read it in about less than one day! I thoroughly enjoyed Brumby’s Run and The Mallee Girl. Evoked memories of my childhood reading The Silver Brumby series by Elyne Mitchell - hiding under the covers with a torch reading! Highly recommended - you will not be disappointed 😃
Images in this review

Marcia B
5.0 out of 5 stars Another fabulous read by Jennifer Scoullar
Reviewed in Australia on 15 April 2022
I have loved every book by Jennifer Scoullar that I have read, and The Mallee Girl was no exception. In The Mallee Girl, Scoullar skillfully combines her passion for nature and love of horses with the underlying dark themes of bigotry and domestic violence.
Pippa Black is the mallee girl, raised by a Christian Pastor father who selectively chooses those parts of the Bible to quote and rule his family by, home schooled to protect her from secular influence and with a mother who is the model submissive wife.
The way those who proclaim to follow God’s teachings cherry pick the parts of the Bible (whether Old or New Testament) to believe and quote as God’s word has always fascinated me. In Pippa’s case her father prefers the often misogynistic and xenophobic aspects of the Old Testament to the more loving and all-encompassing view of the New Testament, while at the same time despising those of the Jewish faith for whom the Old Testament is the Bible!
Having been raised in a very secluded manner, home schooled so she has minimal access to friends, Pippa has no experience when Cade Black shows an interest in her, but her father approves of him and soon she becomes his wife. Having been raised that it is a wife’s duty to submit to her husband, Pippa endures the increasing violence that Cade perpetrates, knowing that she will get no support from her parents if she leaves him.
A combination of drought, and Cade’s total ineptitude, lead to him needing to leave the mallee farm and seek work in the mines, where he is an easy target for those sowing hatred against Jews, Muslims, immigrants etc.
The events that follow lead Pippa to summon up the courage to escape and undertake a search for a half brother that her mother has alluded to. Assuming a new identity Pippa endeavours to leave her past behind her and create a new future. However, she doesn’t get off to a good start when she arrives at Brumby’s Run, the property she believes her half=brother may own when she accidently allows the magnificent golden, silver maned stallion, named Thowra, to escape.
Levi Goldstein has been left in charge at Brumby’s run while the owners Drew and Samantha are on their honeymoon. Although frustrated that she has allowed Thowra, a horse he has been trying to catch for years, to escape, Levi assumes that Pippa has arrived for a station hand trial and points her to her accommodation.
As the mutual attraction between Pippa and Levi grows, can Levi break through Pippa’s barriers to discover who she really is? Can Pippa put aside her distrust and fear of men to accept that not every man is like Cade, and that Levi’s gentle and caring nature is who he really is? Can she reconcile that the Jewish man in front of her is nothing like how her father and Cade have portrayed Jews to be?
And what will happen if Cade finds her?
While this book addresses some dark, but very real, aspects of society it is underpinned by Scoullar’s magnificent story telling and interactions between people and animals. Dog people will relate strongly to the character Duke, Pippa’s magnificent Red Kelpie, and the bond between the two of them. Even those who are not horse people cannot fail to experience the magical relationship between Pippa and Thowra. A fantastic read, with wonderful characters and a strong story line. A five-star read from me.

Joanne Barton
5.0 out of 5 stars Stunning High Country - majestic Brumby’s
Reviewed in Australia on 20 April 2022
What a brilliant read - I read it in about less than one day! I thoroughly enjoyed Brumby’s Run and The Mallee Girl. Evoked memories of my childhood reading The Silver Brumby series by Elyne Mitchell - hiding under the covers with a torch reading! Highly recommended - you will not be disappointed 😃
Read more

Joanne Barton
5.0 out of 5 stars Stunning High Country - majestic Brumby’s
Reviewed in Australia on 20 April 2022
What a brilliant read - I read it in about less than one day! I thoroughly enjoyed Brumby’s Run and The Mallee Girl. Evoked memories of my childhood reading The Silver Brumby series by Elyne Mitchell - hiding under the covers with a torch reading! Highly recommended - you will not be disappointed 😃
Images in this review