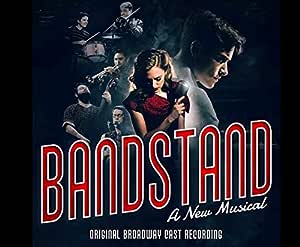 Secure transaction
Your transaction is secure
We work hard to protect your security and privacy. Our payment security system encrypts your information during transmission. We don’t share your credit card details with third-party sellers, and we don’t sell your information to others. Learn more
Details
Ships from
Amazon AU
Sold by
Amazon AU
New (7) from
$24.97 FREE Delivery on first order.

2017 original cast recording. Bandstand brings the swing-fueled, against-all-odds story of singer/songwriter Donny Novitski and his band of mismatched fellow vets brilliantly to the stage. When a national contest to find America's next music sensation offers a chance at fame and Hollywood fortune, Donny must whip his boys into fighting shape. Teaming up with a beautiful young war widow as their singer, and playing for every voiceless underdog in a world that has left them behind, they will risk everything to redefine the meaning of victory and sing truth to power. Directed and choreographed by two-time Tony Award winner Andy Blankenbuehler (Hamilton, In the Heights), starring two-time Tony nominee Laura Osnes (Cinderella, Bonnie and Clyde), Broadway sensation Corey Cott (Newsies), and Tony winner Beth Leavel (The Drowsy Chaperone), and featuring an explosive original score by Richard Oberacker and Robert Taylor, Bandstand is a truly American celebration of the men and women whose personal bravery defined a nation. The original Broadway cast recording is produced by Michael Croiter.

4.7 out of 5 stars
4.7 out of 5
89 global ratings
How are ratings calculated?
To calculate the overall star rating and percentage breakdown by star, we don’t use a simple average. Instead, our system considers things like how recent a review is and if the reviewer bought the item on Amazon. It also analyses reviews to verify trustworthiness.

PB2008
5.0 out of 5 stars One of the Best Broadway Cast Recordings Ever
Reviewed in the United States on 3 July 2017
Verified Purchase
Bandstand is a phenomenal musical show and the cast recording is wonderfully done. To understand my comments on the CD it may be helpful to have some background on the show.

Bandstand was developed and had its world premiere at Paper Mill Playhouse in Millburn, NJ. From there it moved to Broadway. The show is set in 1945 and is the story of a group of veterans newly returned from World War II. It masterfully blends several story lines:

* veterans dealing with a range of what we now call PTSD symptoms although at the time there was no name for this condition. The director and cast won an award for the accuracy with which they depict the vets dealing with PTSD.

Even though it is set in 1945, the show is so relevant today.

I was surprised the show only won one Tony award – for Andy Blankenbuehler's (Hamilton) choreography. I believe it is because the people voting did not appreciate the full range of issues and emotions in the show.

All four story lines are interwoven in a masterful way. Many numbers are really great; the finale (Welcome Home) is amazing. If you are in New York City this show is a must see.

This CD brings the show to life. Laura Osnes, Cory Cott, and the entire cast deliver outstanding performances. Listen closely and you will hear the details of the big band music along with the original lyrics that bring out a full range of emotions. The notes include full lyrics.

The CD includes some of the key dialogue. This dialogue adds texture and bring you more into the show.

anireader
5.0 out of 5 stars As Flawless and Memorable as the Live Broadway Show!
Reviewed in the United States on 2 July 2017
Verified Purchase
Pre-ordered the CD just after attending the incredible opening night performance and I was not disappointed when my CD arrived. I closed my eyes and imagined the opening scene, carefully listening to the drum beats mixed with the distant sounds of wartime shell explosions, brilliantly orchestrated. The CD then took me through this entire moving and incredibly inspiring story of post-war struggles of these WWII veterans plus a wartime widow, all supporting one another to overcome the demonic memories and physical scars of combat. The sound quality in the theater on opening night was as flawless as any Broadway show I had ever attended. This is especially remarkable given live musicians moving on stage while playing - any sound man's nightmare. The CD was perfect. If there had been a Tony for best sound engineering, Bandstand would have won hands down. Of course, the show did win a Tony for Andy Blankenbuehler's choreography, was nominated for a Tony for best orchestrations, and took away several Drama Desk Awards and CR's. Yes, this sound track delivers flawlessly mixed memories of your Grandmother's swing music but with an exciting new and distinct 2017 spark will enjoy over and over. Bndstand is a work of perfection. This is an original cast recording any Broadway lover would want to have as part of his or her collection. This show entertains you, moves you emotionally, and then inspires. These recordings are put together with the same passion for perfection which drives the live show itself - flawless Laura Osnes and the amazing Corey Cott, plus a very talented live stage band. I was truly excited to play the OCR several times and will play it many more.
Read more
6 people found this helpful
Report abuse

neelaban
5.0 out of 5 stars A great new Broadway musical
Reviewed in the United States on 13 August 2017
Verified Purchase
I had the pleasure of seeing this show on Broadway in April and loved the music in it. If you're a fan of swing music or the 1940's era music, you will probably love this album. The cast is excellent. I became a fan of Laura Osnes when she was competing on "You're the One that I Want" and have enjoyed her voice on several albums since as well as seeing her perform several times in New York. Corey Cott, who plays the lead, is an excellent singer and actor as well. Take a listen to the samples and see if you don't tap your foot along. The show itself is not all happy moments, but reflects on the boys coming home from World War II and their emotions. Overall, it's a great musical with all original numbers.
Read more
4 people found this helpful
Report abuse
See all reviews
Back to top
Get to Know Us
Make Money with Us
Let Us Help You
And don't forget:
© 1996-2021, Amazon.com, Inc. or its affiliates