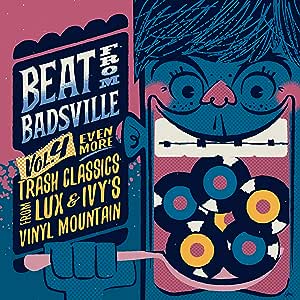 'Even More Trash Classics From Lux & Ivy's Vinyl Mountain'. Brought up on the radio shows of the legendary rock 'n' roll DJs, the moondogging Alan Freed, Mad Daddy and, later, the ghostly Ghoulardi, it was hardly surprising that The Cramps' Lux Interior and Poison Ivy began trawling the thrift stores for juvenile delinquent tunes, lip curling bad boy rock 'n' roll, strange exotica, bizarre novelty 45s, dysfunctional doo wop, psychedelic weirdness and instrumentals made by madmen. In America in the 1950s and 1960s there seemed to be small town versions of such vinyl madness everywhere that, by the 1970s were remaindered and to the majority of people unwanted. To the fledgling Cramps this was nothing short of heaven. The duo filled their house with novelty memorabilia, schlock horror furniture and a record collection to die for. Lux eventually gravitated to his own Purple Knif Radio show and the Cramps delivered their versions of some of the stuff they'd found. The duo name-checked many a 45 along the way and seeking them out and sampling their eccentricities is nothing short of mind blowing. This 24-track collection positively effervesces with eccentricity.The CD is divided into 4 themes: ""The Rock`n´Rollers"", ""New Dance Trend"", ""Instrumentals"" and ""The Mad Daddies"". Every track pirouettes dangerously and at times hap hazardly around the expected. These are songs for strange times by what can definitely be considered strange people. Gems and nuggets that sparkle even more bright in today's manufactured music maelstrom. The population of Badsville welcomes you aboard. 1. Gary Link & The Rock-A-Fellas - Rhythm Rock 2. Buddy Starr & The Starliners - Hold It 3. The Saints - Call My Name 4. Jamie Coe Summertime 5. Bo Toliver & His Timers Begging 6. Dossie ""Thunderbird"" Terry - Fool Mule 7. The Vocaleers - The Cootie Snap 8. Celestine - Shake, Baby, Shake 9. Young Jessie - Shuffle In The Gravel 10. Creel Sisters - Stop The Clock Rock 11. The Phaetons Fling 12. Burt Keyes With Teddy McRae & His Orchestra - Stop Jivin' Start Drivin' 13. The Dawnbeats - Midnight Express 14. The Stereos - Hot Rod 15. The Ramblers - Devil Train 16. The Storms Tarantula 17. The Ramblers Rambling 18. The Renegades Charge 19. Nightmares Jimmie Maddin Orchestra - (Oooh I'm Scared) Of The Horrors Of The Black Museum 20. Don Johnston - The Whipmaster 21. Jivin' Gene And The Jokers - Up... Up... And Away 22. Freddy Montell - (Ooey Gooey) Green Cheese 23. Terry Corin And Her Boyfriends - Sick! Sick! Sick! 24. Mr. Undertaker - Here Lies My Love

There are 0 customer reviews and 3 customer ratings.
Get FREE delivery with Amazon Prime
Prime members enjoy FREE Delivery and exclusive access to movies, TV shows, music, Kindle e-books, Twitch Prime, and more.
> Get Started
Back to top
Get to Know Us
Make Money with Us
Let Us Help You
And don't forget:
© 1996-2020, Amazon.com, Inc. or its affiliates