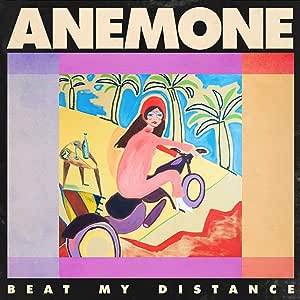 Share
Temporarily out of stock.
Order now and we'll deliver when available. We'll e-mail you with an estimated delivery date as soon as we have more information. Your account will only be charged when we ship the item.
US imports may differ from local products. Additional terms apply. Learn More.

Secure transaction
Your transaction is secure
We work hard to protect your security and privacy. Our payment security system encrypts your information during transmission. We don’t share your credit card details with third-party sellers, and we don’t sell your information to others. Learn more
Details
Ships from
Amazon US
Sold by
Amazon US
New (6) from
$20.31 & FREE Delivery

"Where you go, I want be/ A hole inside your head," sings Chloe Soldevila on "Daffodils," thesecond track from Anemone's debut album Beat My Distance. The line acts as both a promise and a threat-this is music that will stick with you, that will live inside your brain, that will become a part of you forever. This is music that refuses to be ignored.Anemone is the brainchild of Soldevila, a Montreal native. Raised in the classical music tradition and formally educated in jazz music, Soldevila came to rock music late, at the tail end of high school, when she discovered krautrock mainstays like Neu! and Can. Traveling as a photographer and filmmaker throughout her early twenties, Soldevila rebelled against her strictmusical upbringing, immersing herself into the psychedelic tradition in California, and punk and new wave music in France.Anemone officially began when Soldevila met Zachary Irving at a show. Around the same time, Soldevila and Miles Dupire-Gagnon met at a bar, and he introduced her to Gabriel Lambert. Themusical connection was immediate, and the four began working on songs together soon after. Samuel Gemme was a friend and sound engineer who worked on their recordings, spending so much time in the studio with them that he eventually joined the band. The final lineup of Anemone was set."The focus of the live show is to make people loose, getting them to dance, breaking people out of their shyness," says Lambert "Making people go crazier and crazier every night. Our mission was to capture that feeling on the record."The resulting album Beat My Distance is a dreamy psychedelic ride, hopping through genres and moods with exuberance. In the midst of all the swirly shoegaze guitars and krautrock beats, Anemone's songs are anchored by Soldevila's voice, always catchy and direct, powerful enough to cut through the mix and carry the song. The record has an experimental feel, but never at theexpense of melody or hooks

4.8 out of 5 stars
4.8 out of 5
9 global ratings
How are ratings calculated?
To calculate the overall star rating and percentage breakdown by star, we don’t use a simple average. Instead, our system considers things like how recent a review is and if the reviewer bought the item on Amazon. It also analyses reviews to verify trustworthiness.

Mark Bloomer
5.0 out of 5 stars A fabulous young band
Reviewed in the United States on 17 March 2019
Verified Purchase
This is beautiful music. The songs are mellow, melodic, catchy and passionate. I have been listening to this album daily ever since I got it a few weeks ago. I might compare them to Alvvays or Beach House. A wonderful young band that I hope gets more widely discovered.
Read more
One person found this helpful
Report abuse

Gem Pascal
5.0 out of 5 stars Wonderful New Album
Reviewed in the United States on 6 March 2019
Verified Purchase
This is right up there with Beachhouse,Melody's Echo Chamber, and St. Etienne, as being the best of Pop, and Alternative with a female lead singer. Memory Lane, and Sunshine From The Start ,are fantastic and as great as anything by the afforementioned.
Read more
Report abuse
See all reviews
Back to top
Get to Know Us
Make Money with Us
Let Us Help You
And don't forget:
© 1996-2021, Amazon.com, Inc. or its affiliates