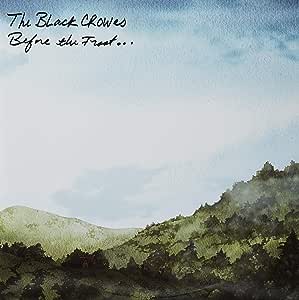 Secure transaction
Your transaction is secure
We work hard to protect your security and privacy. Our payment security system encrypts your information during transmission. We don’t share your credit card details with third-party sellers, and we don’t sell your information to others. Learn more
Details
Ships from
Amazon AU
Sold by
Amazon AU
Before The Frost Until Th... has been added to your Cart
New (2) from
$40.80 + FREE Delivery

Before The Frost Until The Freeze

THE BLACK CROWES will release their new studio CD, Before the Frost...
via the band's Silver Arrow and Megaforce Records. A second album, titled ...Until The Freeze, will be given away for free exclusively through a unique download code included in Before The Frost... CD as a thank you to their fans for two decades of support. A limited-edition vinyl release of Before The Frost...Until The Freeze, featuring all 20 tracks, will also be available.

Before the Frost..., and its corresponding free album ...Until The Freeze, were recorded over a series of five nights at Levon Helm Studios. Although both are studio albums, all the new material was performed and recorded in front of an intimate audience of the band s fans.

Chris Robinson conceived the innovative concept of Before the Frost...Until The Freeze:
I think we fulfilled a musical commitment to continue on the golden road of artistic independence. Approaching 20 years into our careers, we still are ambitious enough to push ourselves to create somethin g unique that we have never done before.

As The Black Crowes approach the upcoming 20th anniversary of their release of one of rock s most influential records, Shake Your Money Maker, which produced such hits as Jealous Again, She Talks To Angels and Hard to Handle, they are time and again hailed as one of Rock and Roll s best live acts.

4.6 out of 5 stars
4.6 out of 5
286 global ratings
How are ratings calculated?
To calculate the overall star rating and percentage breakdown by star, we don’t use a simple average. Instead, our system considers things like how recent a review is and if the reviewer bought the item on Amazon. It also analyses reviews to verify trustworthiness.

Captain Kirk
4.0 out of 5 stars not quite brilliant
Reviewed in the United Kingdom on 13 September 2013
Verified Purchase
Playing is great , esp lead guitar and piano, singing fine and not to OTT as it sometimes can be, production clear and full.

Sounding at times like a beefed up Little Feat or even Poco, with a good variety of music deviating slightly from their usual blues-rock - eg. a funk track (vocals a bit samey and tuneless at first but great toward the end), a pleasing enough soft rock track and - a greater departure for the band i think - a number that sounded drum machine plus electronic tings and bleeps to start but then was wonderfully added to with enhancing guitar licks (which may grow on me as the best track on the album),and, at the end, a sombre but melodic solo plus guitar. There are a few bombastic passages, some irritating chord and tempo changes; some tracks sound a bit as if the musical kitchen sink has been chucked in or like sound slightly uninspired and formulaic country-rock; some tracks start promisingly and then throw away an original and outstanding tune by not working it up properly and expanding on its possibilities, other tracks begin unpromisingly and yet develop well. Not a bad album in all , but some wasted opportunities.

As others have said, this has a more country rock emphasis than past BC albums, but that is no bad thing, especially as they are perhaps reminding some of how good that genre was, and they do it very well. However, this album is in that sense new for them, but it is not innovative to rock or blues or country as a whole; it is in the end a display - a good display, granted - of BC doing a generic country rocker, a generic country ballad, a generic soft - rock song, a generic country-folk song. and so on. Enjoyable then, but not ground-breaking

Ray Murphy
5.0 out of 5 stars phew that was close
Reviewed in the United Kingdom on 27 January 2010
Verified Purchase
well well well, i never thought the day would come but yes folks its true the black crowes have made a good album since southern harmony ! Not only good its bloody good,
i myselft read reviews on amazon and thought i would give one last blast of faith and it has paid off. Now how a band like the crowes ended up spending so many years making such self indulgent music is beyond me, mediocre riffs with constant wailing, but here they have somehow regained focus and clarity and the mush has gone, more like tennessee mash ! There is the occasional relapse but they are not too offensive.

I have the vinyl version, which should be the only version as this album was made for vinyl, Valve Amps and lovely warmth. Unfortunately i cant differenciate the two albums, its just a brilliant double, they excel in country, country rock and really nice slower stuff, like proper music these songs are ready to become good friends and follow us down the road of our own lives.

The only thing i do not understand about the crowes is that their best album the debut is a very southern soul affair ( stax etc ) and it seems they have never returned to that in any way !! i could be wrong but still strange.

so buy this on vinyl, it harks back to the days when albums were solid affair and not just chucked out nearlies !

Andy Macdonald
5.0 out of 5 stars With an additional surprise
Reviewed in the United Kingdom on 17 October 2020
Verified Purchase
Arguably (but not in my house) the best Black Crowes album ever. Richer more mature and thoughtful in lyric and melody. Includes the original album and a part 2 which was till now down load only. Plus the whole thing came on ( an unlisted) white vinyl Exceptional listening.
Read more
Report abuse

JGL
4.0 out of 5 stars Mature album alert
Reviewed in the United Kingdom on 18 November 2009
Verified Purchase
Ho hum, the gainsayers are saying this doesn't rock, it's not as good as...etc,etc. And they are right to a certain extent. This isn't as rocky as their first three albums, I don't like it as much as some others (I like the vastly underrated 3 snakes for instance - crazy huh?) but on the whole this is a fine, modern, and, yes, mature album made by a band obviously having fun.
Read more
4 people found this helpful
Report abuse

Torolf Rosvold
5.0 out of 5 stars Just what i hoped for !!
Reviewed in the United Kingdom on 4 March 2021
Verified Purchase
Perfect !! And the service absolutely fab !!
Read more
Report abuse
See all reviews
Back to top
Get to Know Us
Make Money with Us
Let Us Help You
And don't forget:
© 1996-2021, Amazon.com, Inc. or its affiliates