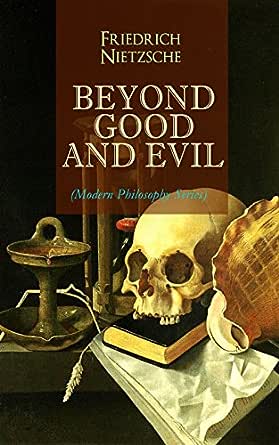 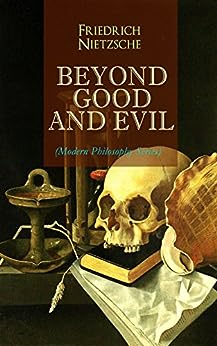 BEYOND GOOD AND EVIL (Modern Philosophy Series): From World's Most Influential & Revolutionary Philosopher, the Author of The Antichrist, Thus Spoke Zarathustra, ... The Gay Science and The Birth of Tragedy Kindle Edition

"I obviously do everything to be "hard to understand" myself"

"One loves ultimately one's desires, not the thing desired."

"The text has disappeared under the interpretation."

"Objection, evasion, joyous distrust, and love of irony are signs of health; everything absolute belongs to pathology."

"One must shed the bad taste of wanting to agree with many. "Good" is no longer good when one's neighbor mouths it. And how should there be a "common good"! The term contradicts itself: whatever can be common always has little value. In the end it must be as it is and always has been: great things remain for the great, abysses for the profound, nuances and shudders for the refined, and, in brief, all that is rare for the rare."

"Madness is something rare in individuals — but in groups, parties, peoples, and ages, it is the rule."

― Friedrich Nietzsche, Beyond Good and Evil

Is a good man simply the opposite of an evil man? Is there a universal morality for all human beings?

Nietzsche's controversial work argues that truth, self-consciousness, and free will are simply inventions of Western morality. Moving beyond conventional ethics and the Western philosophic tradition, Nietzsche explores themes of religion and "master and slave" morality. Beyond Good and Evil is a work of startling insight and penetrating observations on the human condition.

Featuring commentary from Nietzsche scholar Dr Christopher Janaway, Beyond Good and Evil explores the metaphysics of morality and contemplates humanity's basic impulses. Part of the bestselling Capstone Classics Series, this collectible edition of Beyond Good and Evil is an ideal volume for anyone with interest in human morality and ethics. --This text refers to an alternate kindle_edition edition.

Represents Nietzsche's attempt to sum up his philosophy. In nine parts the book is designed to give the reader a comprehensive idea of Nietzche's thought and style. With an inclusive index of subjects and persons. --This text refers to an alternate kindle_edition edition.
Read more

4.4 out of 5 stars
4.4 out of 5
931 global ratings
How are ratings calculated?
To calculate the overall star rating and percentage breakdown by star, we don’t use a simple average. Instead, our system considers things like how recent a review is and if the reviewer bought the item on Amazon. It also analyses reviews to verify trustworthiness.

John Allyn Smith
5.0 out of 5 stars A profound and duly challenging read
Reviewed in Australia on 21 July 2019
Verified Purchase
Unlike many other philosophers considered belonging to the 'western canon', Nietzsche takes great pleasure in shrouding his ideas in so much irony so as to make his true philosophical leanings almost indiscernible to the casual reader (unless, of course, you are willing to sit and labour over each aphorism for an hour). The penguin classics edition of this text muddies the water of Nietzsche's meaning even further by providing one of the most verbose and wordy translations of an already assuredly verbose author; be warned, casual reader! 'Beyond Good & Evil' is not an easy book to read, and it's an even less simple one to truly comprehend the exhaustive meaning of -- but it still functions as by far the most accessible of Nietzsche's writings, for the uninitiated. As for his ideas, I'm not a huge fan myself (he has a habit of relying all too heavily on ad hominem to get his 'points' across) but still, as one of the world's greatest thinkers (and an insatiable wit to match), Nietzsche's writing is, and always will be, undeniably worth reading -- even if just for Nietzsche's devilishly cynical sense of humour.
Read more
One person found this helpful
Helpful
Comment Report abuse

Amardeep Singh
4.0 out of 5 stars This book deserves better.
Reviewed in Australia on 15 January 2019
Verified Purchase
Packing was not good, some marks on the cover, see picture for reference. Paper is too bright. This book deserves a best paper and quality printing.
Read more

C. Martin
1.0 out of 5 stars Awful narration in the audiobook
Reviewed in Australia on 30 June 2020
Great book...but utterly murdered by the narrator. I couldn't listen for more than a few minutes. Recommend you test it first.
Read more
Helpful
Comment Report abuse

Jerra
5.0 out of 5 stars Great little item for my collection
Reviewed in Australia on 19 September 2020
Verified Purchase
Great little item to add to the collection. Book is a compact hardcover, which obviously means making it a page turner isn’t the easiest task, but I am thrilled to own this copy. I like the design and feel of the book. Probably not the copy I’ll use to read daily. And obviously, we know the content is well worth the read.
Read more
Helpful
Comment Report abuse

Kunal L.
5.0 out of 5 stars A deep understanding of the world we live in.
Reviewed in India on 25 January 2019
Verified Purchase
The knowledge contained in this book will change the way you look at the world. It is a deep understanding of morality, what we perceive as good and evil and how everything changes in time, it is a philosophical take on society and the world that we live in,hownit has been and how it will always be. This knowledge is timeless. I have come across very few works of this caliber. It is one of those books that leave you a lot smarter and more knowledgeable after. Brilliant! A must read!
Read more
33 people found this helpful
Report abuse

Jimmy Morrison
5.0 out of 5 stars It changed Western philosophical thinking.
Reviewed in the United Kingdom on 29 March 2018
Verified Purchase
A well produced, reader-friendly edition of a work I hadn't read since I was an undergraduate in the early 1960s. Thought provoking and wryly witty stuff. Great fun. It changed Western philosophical thinking and is still worth delving into.
Read more
13 people found this helpful
Report abuse

JONO5K1
5.0 out of 5 stars Perfect!
Reviewed in the United Kingdom on 28 June 2019
Verified Purchase
Nietzsche was by far the most concise and realistic philosopher. The read is smooth and continuously enlightening. I can recommend to all.
Read more
8 people found this helpful
Report abuse

Sahil
5.0 out of 5 stars Really a masterpiece.
Reviewed in India on 26 February 2019
Verified Purchase
This book has very much deep insights. This book gives bits of nationalism,morality.this book will intereststudents of philosophy. Overall a unique learning material for me.
Read more