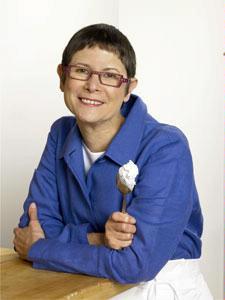 Page 1 of 1 Start overPage 1 of 1
Previous page
Next page
Start reading Baking Chez Moi on your Kindle in under a minute.

"My favorite baking book of the season is Dorie Greenspan's Baking Chez Moi. With superb photography of finished dishes and Ms. Greenspan's clear, clean style, this is a book for any level of baker who wants to broaden his or her repertoire."--Michael Ruhlman for the Wall Street Journal "Approachable and adaptable."--The New York Times "Greenspan has the gift of clarity and making even the complicated seem doable, which in her hands, it is."--Corby Kummer for The Atlantic "French home baking, despite what you might think, is easy, says baking goddess Dorie Greenspan. All you need are a few high-quality ingredients and a bit of care....nearly every page promises some useful tips and shortcuts for the avid baker..."--NPR.org
"No matter how much you don't like to bake, aren't good at baking, don't even want to bake ... if you listen to [Dorie] long enough, you'll find yourself hankering to get your hands into some flour, certain even you can whip up some laborious, glorious baked treat."--Associated Press "On the page, Greenspan talks as if she's having coffee with you, about where she found recipes, about the person who gave them to her, and when she might serve them... The heart of the book is sweets that aren't a bit difficult."
--Boston Globe "Bakers across the world rejoice when Dorie Greenspan comes out with a new cookbook."
--Washington Post "While a trip to France may not be in everyone's near future, veteran cookbook author Greenspan takes home bakers on a tour of Paris through her exceptional collection of recipes (divided into chapters including "Simple Cakes," "Fancy Cakes," "Tarts and Galettes," and "Baby Cakes and Petite Pastries"). French "cousins" to American recipes such as the "Fluted Carrot-Tangerine Cake," and the author's adaptations on French creations such as "Gâteau Basque Fantasie," give readers something they won't find in other baking tomes. While some multistep selections are more suited for the experienced baker, less involved yet equally impressive recipes include a simple plum tart and Nutella-banana panna cotta. Unusual finds like pithiviers, a French pastry named after a city in northern France, are also included. Hefty headnotes and serving notes provide information about recipe origins and traditions. This is an ideal holiday gift."
--Publishers Weekly, starred "Acclaimed author Greenspan--who lives part time in Paris and has collaborated with such famous chefs as Pierre Hermé, Daniel Boulud, and Julia Child--has learned that some recipes are best left to the pros. While several of Greenspan's 11 cookbooks feature intricate, show-stopping desserts, her latest focuses on homey baked goods and pared-down versions of traditional French pastries. Home cooks won't need beeswax and expensive copper molds to make Greenspan's canelés nor will they be chided for using store-bought puff pastry to make palmiers or pithiviers. All types of desserts--crunchy, creamy, cakey, frozen, fruity, and fried--are included, as are simple accompaniments such as homemade crème fraiche, chocolate sauce, and candied fruit. VERDICT: Combining everyday desserts with doable versions of extremely popular treats (think macarons, éclairs, and crackle-top cream puffs), Greenspan's new collection is an instant classic."
--Library Journal, starred

Inducted into the James Beard Foundation's Who's Who of Food and Beverage in America, DORIE GREENSPAN is the author of Dorie's Cookies, a 2017 James Beard Award-winner for Best Baking and Dessert book; Around My French Table, a New York Times bestseller that wasnamed Cookbook of the Year by the IACP; Baking Chez Moi, also a Times bestseller; and Baking: From My Home to Yours, a James Beard Award winner. She lives in New York City, Westbrook, Connecticut, and Paris.

4.7 out of 5 stars
4.7 out of 5
217 global ratings
How are ratings calculated?
To calculate the overall star rating and percentage breakdown by star, we don’t use a simple average. Instead, our system considers things like how recent a review is and if the reviewer bought the item on Amazon. It also analyses reviews to verify trustworthiness.

Mena Lopes
5.0 out of 5 stars Just perfect!
Reviewed in the United Kingdom on 23 July 2020
Verified Purchase
I was waiting a long time for buying these book and it was worth it.
Read more
Report abuse

S. Nithiya
5.0 out of 5 stars Buy it, u ll never regret it
Reviewed in India on 16 August 2015
Verified Purchase
This s my 1st time, owning a Dorie Greenspan's book. I hav heard a lot about her books, especially "Baking from my home to yours". The book s quite heavy with 477 pages.First time Dorie included Macaron recipes in her book but what i felt was, The recipes are for quite a large number. For eg Parisian macaron recipe makes about 45 sandwiched macarons ie, 90 macarons. All I can say is divide the recipe depends upon your oven capcity or the no of servings ur gonna make. Each recipe has got some stories about the recipe origin or from whom she got tat recipe. It has some simple and tasty recipes too ...Slow roasted spiced pineapple, Palmiers, Merveilles etc..How could I forget to mention it, It has the recipe for Eclairs. If I hav to mention the important recipes it ll go on and on..The book consists of recipes from classic french one to some borrowed & invented one of Dorie Greenspan.
Read more
Report abuse

suzannes
5.0 out of 5 stars Fantastic book!
Reviewed in Canada on 22 March 2019
Verified Purchase
This book is perfect for the cook who wants to bake the delicious things you see in a French bakery. The directions are simple and clear and the food comes out fantastic. A great purchase!
Read more
One person found this helpful
Report abuse

E. pengson
5.0 out of 5 stars I love collecting her books
Reviewed in Canada on 24 November 2014
Verified Purchase
just got it & have only tried the sables.. lovely.I love collecting her books.
Read more
4 people found this helpful
Report abuse
See all reviews
Back to top
Get to Know Us
Make Money with Us
Let Us Help You
And don't forget:
© 1996-2021, Amazon.com, Inc. or its affiliates