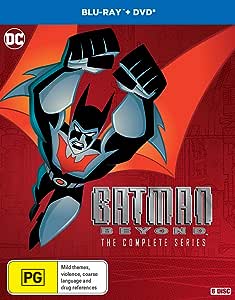 Rage and revenge for his father’s murder motivate Terry McGinnis to steal Bruce Wayne’s high-tech Batsuit. And then a greater purpose and sense of justice keep him wearing it. Across three seasons and 52 episodes of this highly acclaimed Emmy-award winning series, he patrols the streets and skies of Gotham City with Bruce as his guide. Get in on the exciting and explosive partnership between an ex-crime-fighter and his apprentice in the animated series that catapulted the Batman legend to new justice-seeking heights, now in beautiful High Definition!

There are 0 customer reviews and 3 customer ratings.
Get FREE delivery with Amazon Prime
Prime members enjoy FREE Delivery and exclusive access to movies, TV shows, music, Kindle e-books, Twitch Prime, and more.
> Get Started
Back to top
Get to Know Us
Make Money with Us
Let Us Help You
And don't forget:
© 1996-2020, Amazon.com, Inc. or its affiliates