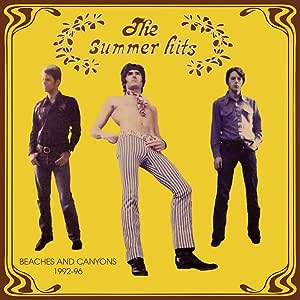 Secure transaction
Your transaction is secure
We work hard to protect your security and privacy. Our payment security system encrypts your information during transmission. We don’t share your credit card details with third-party sellers, and we don’t sell your information to others. Learn more
Details
Ships from
Amazon US
Sold by
Amazon US
New (4) from
$24.64 & FREE Delivery

Formed in Sierra Madre, California in the early 1990s, the Summer Hits comprised vocalist/bassist Tartarex (born Rex Thompson), guitarist Daddy D. (Darren Radermaker) and drummer Joshua "Warm Summer Vibe" Schwartz. A series of noisy, sun-drenched indie-pop singles followed over the next several years, all of which were compiled in 1997 on Beaches and Canyons 1992-96, a collection issued on the small X-Mas label. Both Radermaker and Schwartz were also in the similarly-inclined Further.

Amazon Customer
5.0 out of 5 stars Five Stars
Reviewed in the United States on 14 October 2016
Verified Purchase
The greatest.
Read more
Report abuse
See all reviews
Back to top
Get to Know Us
Make Money with Us
Let Us Help You
And don't forget:
© 1996-2021, Amazon.com, Inc. or its affiliates