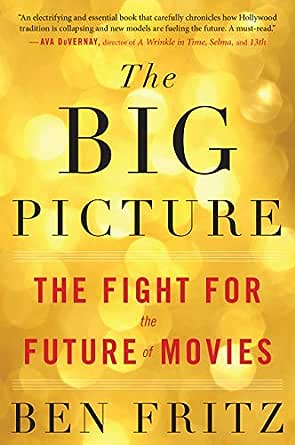 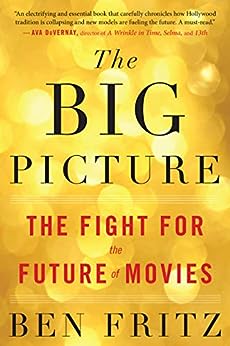 The Big Picture: The Fight for the Future of Movies Kindle Edition

A Los Angeles Times Bestseller "Fritz uses his skills as both a financial journalist and a natural storyteller to spin a narrative that is detailed, funny and a little terrifying. Anyone with a love for intelligent cinema made for discerning adults should be concerned."--The Globe and Mail "The Big Picture is a must-read. It's an informative, entertaining, often maddening look at how the film industry ended up where it is today . . . Pick up Fritz's book. I guarantee you'll likely power through it in one sitting, unable to put it down."--Slashfilm "Fritz offers fascinating tidbits in his unpacking, and argues that we're entering a new golden age of moviemaking."--Entertainment Weekly "Fritz's book is a fascinating behind-the-scenes glimpse at the forces that determine what gets played at the local cineplex."--Publishers Weekly "For those looking for inside scoops on the hidden relationships among movie studios, movie development, and choosing actors, this book is a treasure house."--Kirkus Reviews "The Big Picture holds the reader's attention by telling the stories of senior executives whose careers were destroyed or made by the changes in the entertainment industry. Mr. Fritz culled the fruits of the infamous Sony hack to paint a vivid portrait of life inside the studio as it struggled to respond to the structural challenges it faced."--The New York Times "Ben Fritz crafts an electrifying and essential book that carefully chronicles how Hollywood tradition is collapsing and new models are fueling the future. A must-read."--Ava DuVernay, director of A Wrinkle in Time, Selma, and 13th "The best book on Hollywood I've read in a long time. Fritz explains how and why the invasion of the big buck comic book franchises crushed the Hollywood we once knew."--Peter Biskind, author of Easy Riders, Raging Bulls: How the Sex, Drugs, and Rock 'n Roll Generation Saved Hollywood "An absorbing and insightful chronicle of the massive upheaval in the movie industry over the past 10 years. Fritz uses his skill as a reporter to meld the financial and creative aspects of a business undergoing radical transformation into a compelling narrative. It's a great read not just for those of us who work in the industry, but for anyone with a passion for film." --Jason Blum, producer of Get Out, Split, Whiplash "A great read for anyone who loves movies or the movie business and eye opening for anyone who cares about the future of our industry, whether they agree with Ben's provocative analysis or not."--Ron Meyer, vice chairman, NBCUniversal and co-founder, Creative Artists Agency --This text refers to the paperback edition.

BEN FRITZ is an editor for the Wall Street Journal. He previously covered Hollywood for the Journal, the Los Angeles Times and Variety and is coauthor of the best-selling All the President's Spin. A graduate of Swarthmore College, he lives in Los Angeles.

4.6 out of 5 stars
4.6 out of 5
149 global ratings
How are ratings calculated?
To calculate the overall star rating and percentage breakdown by star, we don’t use a simple average. Instead, our system considers things like how recent a review is and if the reviewer bought the item on Amazon. It also analyses reviews to verify trustworthiness.

B. Clark
5.0 out of 5 stars Great read!
Reviewed in Australia on 15 August 2018
Verified Purchase
Terrific book. Fascinating, super informative. Makes you understand how Hollywood got to the place it’s currently at, for better, but mostly worse.
Read more
Helpful
Comment Report abuse
See all reviews

Bukowski
5.0 out of 5 stars Very informative
Reviewed in the United Kingdom on 19 August 2018
Verified Purchase
I read this book after reading a very boring scholarly book about Chinese films. The vast difference in the quality of this book compared to the bone dry egghead academic one is staggering. This book manages to impart its vast amount of knowledge without putting the reader to sleep. It's one of the best books on the movie business I've read. I highly recommend it.
Read more
One person found this helpful
Report abuse

Daft Monk
5.0 out of 5 stars Fantastic insider view of modern Hollywood
Reviewed in the United Kingdom on 23 July 2019
Verified Purchase
Pacy and well written.
A good general read, but should be compulsory reading for anyone reading screenwriting guides based on a spec script movie industry that no longer exists.

Spiratti
5.0 out of 5 stars An fascinating read.
Reviewed in the United Kingdom on 28 July 2020
Verified Purchase
Couldn’t put it down. Yes it goes deep into the figures in Hollywood but the story surrounding it Is fascinating and very eye-opening. I learned a lot about this period in movies that I really had no idea was going on. Really great read.
Read more
Report abuse

BS on parade
4.0 out of 5 stars Fascinating book but short
Reviewed in the United Kingdom on 20 June 2018
Verified Purchase
Fascinating book about fascinating subject matter but it’s short. It ends at the 74% point on the Kindle edition. It’s well worth a read – at the right price.
Read more
Report abuse

Topcat29
5.0 out of 5 stars All good. Would like to use again
Reviewed in the United Kingdom on 24 February 2020
Verified Purchase
In good condition. Arrived on time.
Read more
Report abuse
See all reviews
Get FREE delivery with Amazon Prime
Prime members enjoy FREE Delivery and exclusive access to movies, TV shows, music, Kindle e-books, Twitch Prime, and more.
> Get Started
Back to top
Get to Know Us
Make Money with Us
Let Us Help You
And don't forget:
© 1996-2020, Amazon.com, Inc. or its affiliates