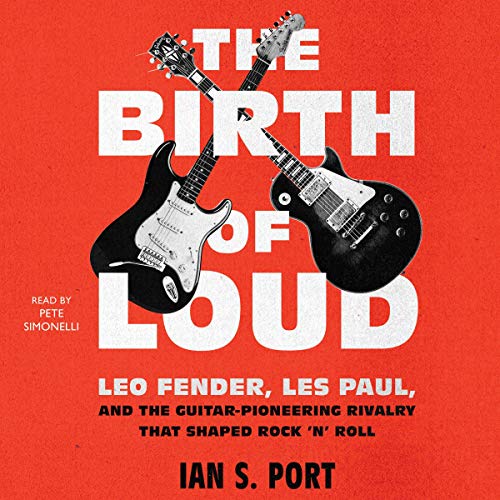 4.8 out of 5 stars
4.8 out of 5
491 global ratings
How are ratings calculated?
To calculate the overall star rating and percentage breakdown by star, we don’t use a simple average. Instead, our system considers things like how recent a review is and if the reviewer bought the item on Amazon. It also analyses reviews to verify trustworthiness.

Amazon Customer
5.0 out of 5 stars fantastic book
Reviewed in Australia on 4 January 2021
Verified Purchase
My son plays guitar and we have a selection of them in our house. Inadvertently, we have the Tele, the Strat, a few LPs and the Precision Bass. The book was so amazing that I see them now in a totally different light. They sort of speak to me, each in a different voice. I look after them for the kid, wire them and even wind my own pickups for them. The book totally changed the way I look at them. Every angle and every cavity are just history.
Read more
Helpful
Report abuse

Bassman
2.0 out of 5 stars Not nearly as good as the reviews suggest - disappointing to say the very least
Reviewed in the United Kingdom on 24 February 2019
Verified Purchase
I bought this book on the strength of the reviews and the fact that I am one of the frequently mentioned 'guitar nerds'. I would say that this book would definitely not satisfy, in any way, the 'guitar nerd'. All of the information about Leo Fender and the development of the Tele, Strat, Precision and his amps is very well known and is related here in so minimal detail that it would have required little or no research. In fact the development of the Tele, the Strat and the Precision is skimmed over in almost 'zero detail' and in view of the fact that the book goes up to the mid to late sixties there's virtually no mention of the Jazz bass. The book is written in a largish type face, has lots of very short chapters and a lot of white space. I don't buy books 'by the yard' but it took me less than a day to read this book and I learnt precisely nothing that I didn't know before. If you are interested in Leo Fender and the guitars, basses and amps he designed and the history of the company he founded than you need look no further than the thoroughly excellent 'Fender - The Golden Age - 1946 to 1970' by Martin and Paul Kelly and Terry Foster. A superb book. Also, the book has lots of 'loose ends' with some 'anecdotes' left in 'mid-air' as if the author has 'lost his thread'. The book appears to also be poorly 'proof read' and there are many inaccuracies - like how Leo lost his eye (the author states that he had an accident and fell - in fact he lost his eye to a cancerous tumour at the age of eight). There's also too much about individuals who, whilst interesting musicians in themselves, had no bearing at all on the development of solid body guitars nor their 'popularisation' - they just played them. Carol Kaye and James Jamerson for instance were great bass players but the Precision had been around for well over a decade before they picked it up and had already sold thousands and was well established at the 'go to' bass for most pro players. Ditto (the wildly over-rated) Jimi Hendrix and the Strat. Also, given the type of person that would probably be buying this book, do we really need to be told that the bridge is where the strings join the body of the guitar (not strictly true actually - especially in the case of the Gibson) or that the headstock is where the strings attach to the tuners? Fender's 'offset body' series of guitars are also referred to as 'blob-like' - what's that meant to mean? As for Les Paul, I'm not sure why he's here at all - because of the premise of the book I guess - to make it into a 'battle' rather than just a 'boring' history. He, like millions of others tinkered with his amps but developed nothing at all, he experimented with multi-track recording to good effect but that's got nothing to do with guitar development but he did, I admit. create his infamous 'log' guitar but it was crude and went 'nowhere' and a few others were doing the same thing at the same time anyway and he had no input whatsoever into the design of the Gibson Les Paul guitar - apart from putting his name on the headstock in return for a 5% royalty - I reckon Gibson were 'done' if you ask me. Also, there is no real story to be told behind the Les Paul guitar itself - it was just a 'me too' answer to the Tele but built in a traditional Gibson style - set neck, carved top etc. Anyway, if you're going to write a book like this then you should do it properly and tell the story thoroughly, preferably in chronological order and with an understanding of the guitars, basses and amps that you are documenting. Ian Port hasn't. Personally, I don't think he is a guitar or bass player - I may be wrong but he comes across as just another music journalist trying his hand at a full length book. This is a book for people who aren't really guitar 'enthusiasts' or players, who aren't much bothered about Leo Fender's (VERY considerable) contributions and don't want to be bothered with too much detail and in any case aren't particularly fussy whether the detail that is actually there is accurate or not. Two stars is rather generous. Leo would turn in his grave. Leo Fender vs Les Paul? Give me a break! A bit like Real Madrid vs Rotherham United!
Read more
15 people found this helpful
Report abuse

Nick Beadle
5.0 out of 5 stars Fascinating book
Reviewed in the United Kingdom on 5 February 2019
Verified Purchase
Well researched but ultimately a book that overflows with passion for the subject. Mainly focused on American musicians, although Brits do get a mention. Only omission I could see was the lack of mention of Hank Marvin in relation to the Fender Strat.... Thoroughly enjoyable book for anyone who loves music and the electric guitar.
Read more
4 people found this helpful
Report abuse

Stanley Laurel
5.0 out of 5 stars No stone unturned
Reviewed in the United Kingdom on 11 February 2019
Verified Purchase
Great book. It gave me a massive appreciation of Leo Fender. What an amazing guy he was.
Les Paul, conversely, is someone I have been aware of for many years but to find about the travails that dotted his professional life was very interesting indeed.
Great book.
Read more
One person found this helpful
Report abuse

Mister Hex
5.0 out of 5 stars Engaging and iconic
Reviewed in the United Kingdom on 25 July 2020
Verified Purchase
I bought this for my dad, who taught me to play guitar a million years ago or so, and from what he's told me he hasn't been able to put this down. I'm told it's well written and very informative. My dad has taste.
Read more
Report abuse

Zippy
5.0 out of 5 stars All you need to know about history of Electric Guitar
Reviewed in the United Kingdom on 16 February 2019
Verified Purchase
Good read so far, explains the development of the electric guitar. Having met Leo back in 1986 I was particularly interested to read about him.
Read more
One person found this helpful
Report abuse
See all reviews
Back to top
Get to Know Us
Make Money with Us
Let Us Help You
And don't forget:
© 1996-2021, Amazon.com, Inc. or its affiliates