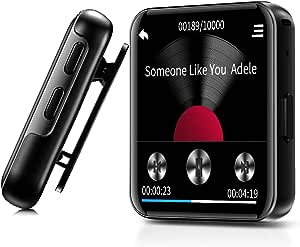 Brand: TIMMKOO
3.8 out of 5 stars 1,037 ratings
Secure transaction
Returns Policy
Amazon-managed Delivery
Your transaction is secure
We work hard to protect your security and privacy. Our payment security system encrypts your information during transmission. We don’t share your credit card details with third-party sellers, and we don’t sell your information to others. Learn more
Amazon-managed Delivery
Amazon manages delivery by using preferred couriers/agents. Order delivery tracking to your doorstep is available

Born for Sports with Clip: Mini size and super lightweight with wearable clip. The lightweight 0.7oz device with clip-on secures firmly to your clothing easily, hands-free portability, you could take the ideal mp3 player for your morning running or afternoon workouts.（Strap is adjustable, let the exercise unburden）

3.8 out of 5 stars
3.8 out of 5
1,037 global ratings
How are ratings calculated?
To calculate the overall star rating and percentage breakdown by star, we don’t use a simple average. Instead, our system considers things like how recent a review is and if the reviewer bought the item on Amazon. It also analyses reviews to verify trustworthiness.

Aussie Purchaser
4.0 out of 5 stars Device compatibility
Reviewed in Australia on 16 August 2020
Color: 32GVerified Purchase
It connected to my generic Bluetooth device, however it was unable to connect to Bose S700 headphones no matter how much I tried.

So yeah, it's a pretty much okay device with the quality of sound and output/ease of use but the major downside is the connectivity issue with my Bose headphones.

Fiona
1.0 out of 5 stars Doesn’t work at all. Complete rubbish.
Reviewed in Australia on 12 September 2020
Color: 32GVerified Purchase
Appalling piece of rubbish. Constantly freezing. Turn off Bluetooth and it turns it off. Turn in on again and it turns it off. Tap on a piece of music to play it and get kick out to home screen again. Doesn’t work at all.
Read more
Helpful
Report abuse
See all reviews

wadie
4.0 out of 5 stars Good not great
Reviewed in the United States on 28 September 2019
Color: 32GVerified Purchase
Just arrived. After refusing to pay buttloads of money for a smart watch that counts my steps (really?!) , requires extra payment to my cellular provider, costs extra for a music option, etc. it finally dawned on me to just find an mp3 watch with Bluetooth. That's mostly what I wanted - something I can take jogging or to the gym and not worry about forgetting it or lugging it around. Thus, this.

Pros: the display is more crisp than I was expecting. The touch is fairly accurate especially given the small size. It's just the right size - not too big to look silly and not to small to be useful. It quickly downloaded my amazon music purchases. It has enough juice to power my Audio Technica over-ear headphones with enough volume. Fully cranked there was no audible distortion. Bluetooth interfaced with my workout headphones easily enough. Intuitive.

Cons: I just assumed it would show album art like my iPhone. It does not. Not a deal breaker but kinda made me sad. It does not let you scroll or speed swipe - so if you have a hundred artists on it, guess what - you have to tab through a hundred artists with a tiny corner touchscreen button. Yikes. Sound is decent through my over-ears but no improvement in BT SQ versus my ancient iPhone. Sad. Finally, not even water resistant.

For the price how can I expect more? But a few interface features like a scroll wheel, a little waterproofing, and some album art and I'd pay double the price.

Jennifer Watson
5.0 out of 5 stars An amazing small gadget that does so much!
Reviewed in the United States on 17 October 2019
Color: 32GVerified Purchase
This MP4 player is awesome because it does so much more than what I expected. My husband has traded off his more expensive Samsung watch for this one recently because he loves the features of it. It is really easy to set up and transfer media to it - as long as you figure out the file format that is needed. A nice perk to it as well is that it plays FM radio- which I feel is missing from so many devices and I love that I can listen to local radio with it. You can do music, videos, ebooks, pictures look at additional files and more. This is so handy, you are not going to miss having your phone around when you have this! It is absolutely fantastic!
Read more

5.0 out of 5 stars An amazing small gadget that does so much!
Reviewed in the United States on 17 October 2019
This MP4 player is awesome because it does so much more than what I expected. My husband has traded off his more expensive Samsung watch for this one recently because he loves the features of it. It is really easy to set up and transfer media to it - as long as you figure out the file format that is needed. A nice perk to it as well is that it plays FM radio- which I feel is missing from so many devices and I love that I can listen to local radio with it. You can do music, videos, ebooks, pictures look at additional files and more. This is so handy, you are not going to miss having your phone around when you have this! It is absolutely fantastic!
Images in this review

coyotebilly
2.0 out of 5 stars Really Wanted to like the TIMMKOO MP3 Player, BUT...
Reviewed in the United States on 7 November 2019
Color: 32GVerified Purchase
I really really wanted to like this device. Excellent price, 32Gigs!!!, BT, decent reviews. So I purchased it to replace my ancient Ipod Nano 5th Gen 16Gig, from 2015!!! Initially I was impressed with the weight of the MP3 player, and how solid and compact the build seemed. The Watchband and "Clip" accessories seemed to be decent, but I settled on the Clip as the watchband was a bit to tight even on its last hole. Set up took a bit to get going but device was fully charged. Initially my Mac wouldn't recognize the drive, but after about a dozen attempts it showed up. It wouldn't accept my playlists, but did take the whole music folder. it took about 2 hours to load the player to capacity. Other settings like time were input and like others mentioned it only shows military time which is disappointing. Pairing was not as easy as advertised and took several tries to get each of two different sets of headphones, and two BT speakers connected. Sound seemed excellent at all ranges, and the wired headphones and earbuds also sounded great. However, just using the device was a bit of a hassle. The touch screen was not very accurate and took multiple attempts at hitting just the right line to select songs. I have big fingers but seriously. And the operating system is pretty basic, straight forward file management. No bells, no whistles, no easy rating, or "hearting" of favorites, no album art...nothing, as was mentioned in other reviews. I know grading it against a touch wheel, itunes, and the ipod os is a little steep. Left it to charge overnight.

Now for the saddest part of the review. I had forgotten to use the device for a day or two, and when I finally turned it on and connected a wired headphone, the battery said it was full. Sat down to do some mobile gaming on my phone at the par. I kept accidentally turning the player off as it doesn't have any kind of "LOCK" button and the On/Off seems unnaturally sensitive, and within minutes the player died. Checked it and said battery was dead. Confusing. I know I charged it for a full night. So plugged it into a battery pack, and left it on the table. One hour later battery said full, plugged in some earbuds, clipped it to my slingbag, and still seated, put my bag over my head. Now as I said the weight of the Player impressed me earlier, now however, the clip was unable to keep the player attached to the strap, and even pulled the Player off the earbuds. It fell maybe three feet and the screen cracked, a quarter way up from one corner, and chipped around the edge in another spot. Disappointing to say the least. I've dropped my Ipod Nano 5th Gen hundreds of times, with not but scratches in the aluminum. Only a weeks use and I seem to have a brand new player with a cracked screen and possible battery issues. For ~$40 bucks I guess it's not so bad, but I'm guessing I'll be looking to replace this one very soon.

Like I said I really wanted to like it. ~$40 for a 32G, BT, MP3 player, the size of a watch?!? Should I try and ask for a refund or just chalk it up to a lessoned learned? Thats my dilemma now.

Read more
13 people found this helpful
Report abuse
See all reviews
Get FREE delivery with Amazon Prime
Prime members enjoy FREE Delivery and exclusive access to movies, TV shows, music, Kindle e-books, Twitch Prime, and more.
> Get Started
Back to top
Get to Know Us
Make Money with Us
Let Us Help You
And don't forget:
© 1996-2020, Amazon.com, Inc. or its affiliates