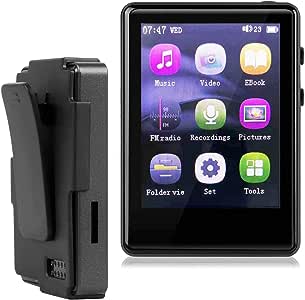 3.9 out of 5 stars
3.9 out of 5
148 global ratings
How are ratings calculated?
To calculate the overall star rating and percentage breakdown by star, we don’t use a simple average. Instead, our system considers things like how recent a review is and if the reviewer bought the item on Amazon. It also analyses reviews to verify trustworthiness.

Daryl & Norma Wilson
5.0 out of 5 stars Simple, compact MP3 player, sounds good, great battery life.
Reviewed in the United States on 20 March 2020
Verified Purchase
Although this tiny MP3 player arrived with a little charge in it, I fully charged it last night using my smartphone's wall charger though a white micro USB cable was included.

After it was charged up, I used it to listen to MP3's for 9 hours nonstop. It still had power when I decided to recharge it again, but the battery icon did show that the battery was running low, but no warning message popped up.

In the box was a glass screen protector, too, which was easy to apply. Not sure if it is gorilla glass or not, it didn't indicate, but I was happy to have that extra protection for it.

The internal 8GB memory had a few high sample photos, a 4 minute Tom & Jerry cartoon clip, a few songs (1 pop song, 1 country and the extended theme song for Disney's Frozen) and two text files (ebooks) already on it, one of which mentioned the types of audio and video files it recognized.

There was also a 32GB Micro SD card in the slot, too, which I immediately downloaded a 6hr audiobook (Rich Dad, Poor Dad by Robert Kiyosaki) onto, along with several Tony Robbins audio programs and almost 100 motivational audios that I ripped from YouTube videos. In total, I only downloaded roughly 13.4GB of audios to the included 32GB MicroSD card via the included USB cable, which took more than an hour. It would have been much faster to simply transfer the MP3 files to the MicroSD card using an SD card adapter and inserting that into my laptop directly. The player accepts up to 128GB capacity MicroSD cards formatted as FAT.

The sound was great for compressed (192kbps) MP3 audios of motivational speeches and an audiobook.

The player's interface was primitive yet effective, using the touchscreen. The menu takes a bit of figuring out, but pretty intuitive.

The Bluetooth setup was easy, but either the connection would get dropped or the player stopped transmitting sound, but the audio would disappear often when selecting different menu items. The player shows the radio or MP3 playing, but I hear no sound in my Bluetooth-connected earbuds.

I figured out how to listen to my music and the radio via the built-in speaker. It was clear but kinda tinnie-sounding andbI had to turn the volume up to max (level 31), whereas I can comfortably listen at level 10 with the wired earbuds.

The volume controls are on the right side. The audio jack is located on the bottom, next to the built-in mic. There is a power button on the top and the MicroSD card slot is on the left side. The included belt clip assembly, when snapped on, does not block the player's buttons and MicroSD card slot whatsoever and securely holds the player. The belt clip is plastic and I can see it breaking if the player is bumped too hard while being worn. I ended up cutting a small 3/4-inch slot in a new wrist sweatband and inserting the clip through that opening which gives me a somewhat stylish, cushioned and secure mount for carrying the player whilst also offering convenient access.

For times when I want to listen to the built-in FM radio over the speaker (also built-in), but do not want to connect headphones to the player, I have a telescoping antenna which I also use with my smartphone's radio app. I got it from Amazon also (Uxcell telescopic 4 section 3.5mm male stereo connector FM antenna 25cm, https://smile.amazon.com/dp/B00W8Z38WM/ref=cm_sw_em_r_mt_dp_U_E.9CEb9TW0S7E).

Overall, I am very pleased with this MP3 player. The build quality seems very good, being metal and glass, and the weight is negligible for the compact size of it. I may buy another as a gift.
Read more

Kevin C
4.0 out of 5 stars Touchscreen makes a big difference
Reviewed in the United States on 21 March 2020
Verified Purchase
Most of the mp3 players are basically the same. However, the touchscreen makes this one stand out. It is MUCH more intuitive to use and since we're all so used to using our touchscreen phones, the transition is easy. Some screens you still need to use arrows at the bottom to scroll around, but it is a vast improvement over having to use buttons to access everything.

Sound is good, Bluetooth worked well. Only drawback is that the manual is ridiculous and was written when Windows XP was a thing. It is very confusing that when you try to load songs into this unit, it will tell you it is only 8GB, despite the website description saying it is 32GB. Through trial and error, I found that if you go to Music, then scroll down to the bottom you'll find that you can select either the internal "Local" 8GB storage, or the 32Gb Card storage. Once you click on the Card as your storage, you should be fine. The unit shows up as one USB drive (i.e. "F") but the Card Storage will show up as the next drive ("G"). Download your albums/songs into the G drive and you should be all set.
Read more
9 people found this helpful
Report abuse

JMJ
5.0 out of 5 stars Such a great little device especially for the price!!
Reviewed in the United States on 29 February 2020
Verified Purchase
This was a pleasant surprise. I got it as a way to free myself from my phone (I used to have a shuffle and loved it) while running and my two little boys became obsessed and now want their own and based on the price is totally OK! I prefer they explore music players for a while before we enter phone fight!
Read more

Arshorsky
5.0 out of 5 stars Perfect and compact
Reviewed in the United States on 6 March 2020
Verified Purchase
Its perfect for my runs through the neighbourhood. My phone is a bit big for running and I didnt want to splurge also, thats why I bought this player. You get so much for the price you pay. Its incredibly easy to use and comes with headphones, charging cord and belt clip. It is compact, the touch screen is very responsive, It got built in FM radio and the sound is great.
Read more

Michelle
3.0 out of 5 stars Almost perfect
Reviewed in the United States on 3 March 2020
Verified Purchase
Like any new mp3 player, this took a second to get used to controlling. After you spend some time with it, it's not so bad. The sound quality is better than average, and the device itself is interesting in size as it's not too big, but the face is a bit larger than other similar devices, allowing you to actually be able to choose your options more precisely. The functions are clear and responsive, the radio plays well and the speaker is loud enough on its own for some background noise. Via BT, this is lossless, which is huge for me, as I don't miss the beginning of my songs like I have been having to put up with with my current player. My only issue is that, for some reason, this only allows you to showcase your time as Military time, 00:00, which I don't use, so it always takes a second to figure out the time when using this.

Update: I've had this player for nearly 6 months now and it WAS working well, but is now starting to act up. For starters, I nearly filled this with songs and now it is working slowly, reacting slowly, taking at least 1 second to switch between screens. It's not so much a deal-breaker, but is more annoying than anything.

One of the functions malfunctioning is the shuffle/replay; when I choose to play songs and the screen times out, the play order setting (default, shuffle, repeat 1, repeat all) resets to a different setting than what it was on previously. So I will be listening to a playlist on shuffle, the screen will timeout, and then the playlist will play in order all of a sudden and I need to reset the play order settings.

Another thing is the shuffle itself which does not cover the songs well. I have a playlist with over 300 songs and the shuffle setting seems to play only a select set of 60 or so songs, sometimes playing THE SAME "shuffled" songs in order. Not sure what is happening with this, as it is becoming less functional with more media added.
Read more

23 people found this helpful
Report abuse
See all reviews
Get FREE delivery with Amazon Prime
Prime members enjoy FREE Delivery and exclusive access to movies, TV shows, music, Kindle e-books, Twitch Prime, and more.
> Get Started
Back to top
Get to Know Us
Make Money with Us
Let Us Help You
And don't forget:
© 1996-2020, Amazon.com, Inc. or its affiliates