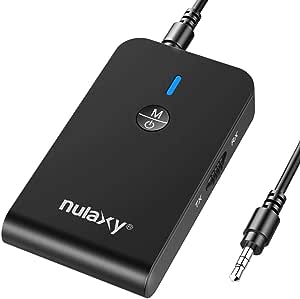 Brand: NULAXY
4.4 out of 5 stars 54 ratings
Secure transaction
Returns Policy
Your transaction is secure
We work hard to protect your security and privacy. Our payment security system encrypts your information during transmission. We don’t share your credit card details with third-party sellers, and we don’t sell your information to others. Learn more
Currently unavailable.
We don't know when or if this item will be back in stock.

Nulaxy BR18 Bluetooth Transmitter and Receiver is an innovative product that will bring more comfort to your life.Who has never had problems with cables? We want to solve this problem and make your life more practical and functional. Imagine being able to play and listen your favorite music wherever you want. Listen the audio of your movie on your favorite headset. Listen that important game on your audio system. With Nulaxy BR18 bluetooth audio receiver, everything is possible! 2-in-1 Wireless Receiver / Transmitter will add and transmit what you need and wherever you want. The largest battery in the market of 1050MA can be recharged in power bank, usb output pc / laptop / tv, power outlet. Have a wide range of signal you will not have problems of connection or interference, we guarantee a stable and secure connection in transmission and reception. BR18 has a 60-day free replacement warranty and after 30 days of purchase, you can register an extra 18-month free warranty on the official Nulaxy website. What are you waiting for? Add in your Cart the Nulaxy BR18 Bluetooth Transmitter for TV right now and get rid of the cables and add Bluetooth to your devices.

4.4 out of 5 stars
4.4 out of 5
54 global ratings
How are ratings calculated?
To calculate the overall star rating and percentage breakdown by star, we don’t use a simple average. Instead, our system considers things like how recent a review is and if the reviewer bought the item on Amazon. It also analyses reviews to verify trustworthiness.

Daniel
5.0 out of 5 stars Great product with a great price, recommended!
Reviewed in Australia on 24 October 2018
Verified Purchase
This is a great little Bluetooth transmitter and receiver. Firstly, it's extremely simple to use, to the point where I didn't bother reading the manual before first use but had it connected to my PC and transmitting audio to my wireless headphones within seconds, simple! Switching between transmitter and receiver modes is also simple, it's done via a small, and well labelled, slide switch on the side of the device, it's that easy.

In the vein of keeping everything simple, an LED light on the device makes it very easy to determine its status, a flashing blue light indicates it's ready for pairing, a solid blue light means it's paired, and a red light will blink 3 times every 2 minutes to indicate when the battery is low. On that note, in order to conserve the battery, the device will actually turn itself off after 5 minutes without any connection, a great feature if, for example, you're using the device to watch TV in bed with a set of wireless headphones, in this case you don't need to get up to turn off the Nulaxy transmitter, you simply tun off your headphones and the transmitter will then turn itself off 5 minutes later.

I've used the device while watching video content on both my TV and PC and didn't notice any lag in the transmitted audio, the audio and video were always in sync. I've also used the device in receiving mode when transmitting audio to it from my Android phone and tablet, in these cases I had a set of wired earphones plugged into the Nulaxy 2-in-1 and it all worked flawlessly.

I like that the Nulaxy 2-in-1 is charged via a standard micro USB port, and not some proprietary connection, as it's a nuisance trying to find a specific charging cable for a device among the myriad of cables many of us have these days, most people probably have a micro USB cable lying around somewhere though, plus they're extremely cheap to replace. It's worth noting that the Nulaxy 2-in-1 does come with a USB to micro USB charging cable, a 3.5mm male to 3.5mm male stereo cable, and a 3.5mm male to 2 x RCA male stereo cable, this means you should be able to connect the device to the vast majority of equipment out there that produces an audio signal.

I definitely recommend the Nulaxy 2-in-1 Bluetooth Transmitter/Receiver, I'm extremely happy with mine and use it frequently to watch TV, play videogames or listen to music in bed in order to avoid waking up my partner, I'm pretty sure she's happy with it too for that reason. :-)

Alexis Lim
5.0 out of 5 stars My Opinion....
Reviewed in Australia on 1 January 2019
Verified Purchase
What I like about this product is that it is easy to pair/sync. The sound quality is good. I used it mainly to pair with my Bose headset when travelling in planes. I am using it in the transmitting mode. This eliminates having to use cables when connecting to the plane audio system.

Caution: when using with another device in receiving mode, the sound/signal is distorted.
Read more
3 people found this helpful
Helpful
Report abuse

I. Hudson
3.0 out of 5 stars Background line hiss - needs line attenuator...
Reviewed in Australia on 19 October 2019
Verified Purchase
Device is very light weight and smaller than hand-held size. Works as advertised as a lag-free receiver for audio/video audio played from an iPod touch and Win 10 PC... BUT gives loud/noticeable background/baseline LINE HISS when actively receiving from EITHER device. We had to filter out the hiss by connecting a Bose airplane/airline adapter as a line attenuator (see photo). As such, we DO NOT RECOMMEND this product as a receiver if you don't have a line attenuator to attach. Also, tying to use the multifunction button as play/pause for the received audio stream didn't work (maybe play/pause is only for when it's used as a transmitter), and pressing the button just put it into pairing mode again. Finally, it plays a beep-booop noise when first connecting and also when going to sleep after not receiving an audio stream for about 5 mins. Hope this helps you.
Read more

JoshieWa
TOP 1000 REVIEWER
5.0 out of 5 stars Does what it says, easy to use
Reviewed in Australia on 29 March 2019
Verified Purchase
Picked this up to pair my mixer board with my bluetooth headphones. Simply put, i wanted the transmitter function of this device. I saw many cheaper options that had poor reviews or looked abysmal so jumped on this one. Within the box came the device, a 3.5mm cable, a usb to micro usb power cable and a RCA (red & white) to female 3.5mm. Like everyone else i ripped the package apart, hooked it up to the mixer board and plugged in power. Held the on button until it started to flash (usual indicator for pairing) and did the same with my headphones. Boom, connection made and sound started to come through. I think personally the sound is quieter than what the direct cable would provide and notice that when turning up the volume on the mixer it caused distortion however this was mitigated by turning up the headset itself. Apart from that I have had no issues and leave the device plugged into power with 3.5mm piped into the mixer. Postage from the seller was as expected and product packaging was nice and not some cheap brown box. Anyone who needs a transmitter, jump on this.
Read more
Helpful
Report abuse

Frank fu
5.0 out of 5 stars Great product but needs to be pair with a place with minimal active bluetooth activity
Reviewed in Australia on 5 November 2018
Verified Purchase
This was a great product supporting both transmission and receiving meaning I could easily take this on a flight with me and not be left using the "less than optimal" headphones most flight carriers provide. It also means that I'm able to pair it to my phone and easily plug my 3.5mm jack earphones with me while i'm on the go.

All in all, it's a great product with good value.
Read more
Helpful
Report abuse

Sagar s.
5.0 out of 5 stars Great quality
Reviewed in Australia on 13 May 2020
Verified Purchase
Awesome product, very good features. Absolutely the device I wanted, I wanted to play music in car via Bluetooth and also occasionally watch movies with my brother suing two headphones connected to same TV or phone, and it allows me to do all that, very happy with the product.
Read more
Helpful
Report abuse
See all reviews
Pages with related products. See and discover other items: Best Rated in Wireless Music Devices, Best Rated in Wireless Audio Receivers & Adapters
Get FREE delivery with Amazon Prime
Prime members enjoy FREE Delivery and exclusive access to movies, TV shows, music, Kindle e-books, Twitch Prime, and more.
> Get Started
Back to top
Get to Know Us
Make Money with Us
Let Us Help You
And don't forget:
© 1996-2020, Amazon.com, Inc. or its affiliates