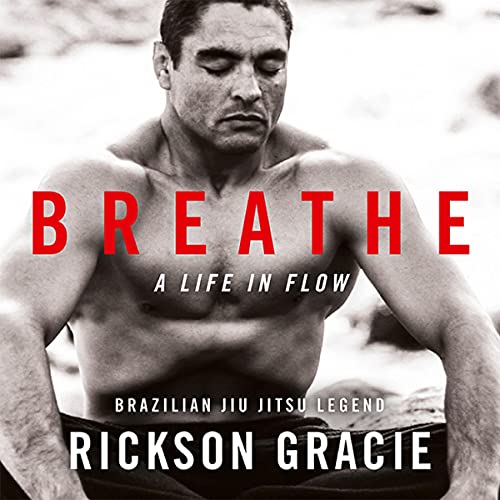 Breathe: A Life in Flow

From legendary Brazilian Jiu-Jitsu and MMA master Rickson Gracie comes a riveting, insightful memoir that weaves together the story of Gracie’s stunning career with the larger history of the Gracie family dynasty, showing how the connection between mind and body can be harnessed for success both inside and outside the ring.

Undefeated from the late 1970s through his final fight in the Tokyo Dome in 2000, Rickson Gracie amassed hundreds of victories in the street, on the mat, at the beach and in the ring. He has joined the pantheon that includes Bruce Lee, Chuck Norris and Jackie Chan as one of the most famous martial artists of the 20th century. Jiu-Jitsu, the fighting style developed and pioneered by his family, has become one of the world’s most prominent martial arts, and Vale Tudo, the 'anything goes' style of Brazilian street fighting over which the Gracies had a monopoly, was an early precursor to the Ultimate Fighting Championship. Simply put, without the Gracie family, there would be no sport of ‘MMA’, no four-billion-dollar UFC empire and no ‘Brazilian Jiu-Jitsu’ at strip malls all across America.

In Breathe, for the first time, Rickson shares the full story of how his father and uncles came to develop Jiu-Jitsu, what it was like to grow up among several generations of world-renowned fighters from the Gracie clan, and the principles and skills that guided him to his undefeated record. From learning to assert himself on the streets of Rio to gaining fame and honour in Japan and emerging through heartbreaking tragedy, the martial arts master shares tales of overcoming challenges, extolling universal virtues and showing listeners how pride and ego are the enemies of success.

With profound insights into the sport and way of life that only a studied legend can provide, Breathe is an entertaining and magnified view of an enduring legacy as well as an inspiring tale of weathering life’s complexities and overcoming them with style and grace.

Switch between reading the Kindle book & listening to the Audible narration with Whispersync for Voice.
Get the Audible audiobook for the reduced price of $12.91 after you buy the Kindle book.
Learn more about membership
By completing your purchase, you agree to Audible’s Conditions Of Use and Privacy Notice.
Sold and delivered by Audible, an Amazon company
Share

4.8 out of 5 stars
4.8 out of 5
266 global ratings
How are ratings calculated?
To calculate the overall star rating and percentage breakdown by star, we don’t use a simple average. Instead, our system considers things like how recent a review is and if the reviewer bought the item on Amazon. It also analyses reviews to verify trustworthiness.

RYZO
5.0 out of 5 stars Great read
Reviewed in Australia on 22 October 2021
Verified Purchase
Great and easy read. Finished in two days and I am not a reader. Wisdom at its finest! Thank you rickson
Read more
Helpful
Report abuse

Paul Friend
5.0 out of 5 stars Inspiring story
Reviewed in Australia on 26 August 2021
Verified Purchase
The book seems to capture the essence of Rickson and is inspiring in different ways. It was a joy to read.
Read more
Helpful
Report abuse

Amazon Customer
5.0 out of 5 stars Loved it!
Reviewed in Australia on 27 November 2021
Very interesting family history and up bringing and what a life this man has lead.
Read more
Helpful
Report abuse

Robert
5.0 out of 5 stars awesome, trained with him , now read his story. a warrior
Reviewed in Australia on 21 August 2021
nothing
Read more
Helpful
Report abuse
See all reviews

Anthony J
5.0 out of 5 stars An open and honest account of his life
Reviewed in the United Kingdom on 23 September 2021
Verified Purchase
Always thought Rickson was one of the top instructors in his field, albeit I’m not a BJJ student but do train jujitsu, always liked the top Gracie’s teaching methods. So gave the book a read and can say was very entertaining but also appears to be full of honesty about his life and the Gracie family, you read it and see they are just a family like every other, albeit they have gone on to great success, a good little read for anyone interested in the Gracie’s, jujitsu or any martial arts practitioners
Read more
One person found this helpful
Report abuse

Gary J Savage
5.0 out of 5 stars Fascinating insight into the life of a living legend
Reviewed in the United Kingdom on 26 August 2021
Verified Purchase
Rickson Gracie is considered by many as Jiu-Jitsu’s greatest of all time. Stories have been passed down through time as to his incredible skill and understanding of his family’s art, Gracie Jiu-Jitsu. It was refreshing to read a very honest and open account of a life that has seen its share of drama, tragedy and success. Rickson comes across as a man that has walked the path of a warrior, made mistakes, as we all have, and learned to live his authentic best following the loss of his oldest son. I would have liked more great stories, but perhaps there is another book planned (I hope so). All in all a great read, whether you are a Jiu-Jitsu practitioner or just someone that is looking for inspiration. Highly recommended.
Read more
Report abuse

Kindle Customer
5.0 out of 5 stars .........and breath
Reviewed in the United Kingdom on 6 October 2021
Verified Purchase
More than a martial artist Rickson brings a philosophy and spiritual gift to the martial arts community, the living embodiment of the Gracie Legacy.

This autobiography brings a candid insight into Ricksons life, opens a window into the growth of ju -jutsu and casts a light into some of the myths surrounding him.

Amazon Customer
5.0 out of 5 stars Great read
Reviewed in the United Kingdom on 24 August 2021
Verified Purchase
Great read for any BJJ fan. I was expecting it to be a book about Ricksons breathing technique when I pre ordered it to be honest but was please to learn about the Gracie family history and about Ricksons life story.
Very inspiring.
Read more
2 people found this helpful
Report abuse

Kie
5.0 out of 5 stars Simple but Brilliant
Reviewed in the United Kingdom on 13 October 2021
Verified Purchase
I would encourage everyone to read this book. While it will naturally appeal to BJJ/Fight fans more, there are fundamental lessons about life that will resonate with everyone. Rickson’s way of writing is beautifully simple, the words dance off the page and into your soul. It’s an easy read, and will only take a few days - but it will stay with you forever.

His story has everything - the greatest highs, and the lowest lows - and it all resonated with me more than any book has for a long time. I look forward to reading it again soon - it’s that good!
Read more
Report abuse
See all reviews
Back to top
Get to Know Us
Make Money with Us
Let Us Help You
And don't forget:
© 1996-2022, Amazon.com, Inc. or its affiliates