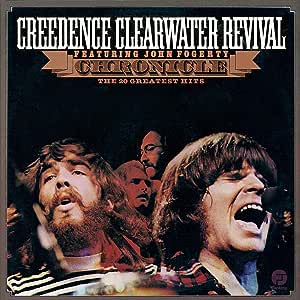 Share
Only 5 left in stock (more on the way).
Quantity:1
Add to Cart
Buy Now

Secure transaction
Your transaction is secure
We work hard to protect your security and privacy. Our payment security system encrypts your information during transmission. We don’t share your credit card details with third-party sellers, and we don’t sell your information to others. Learn more
Details
Ships from
Amazon AU
Sold by
Amazon AU
Chronicle: The 20 Greates... has been added to your Cart
New (8) from
$44.28 + FREE Delivery

Chronicle, Vol. 1, also known as Chronicle: The 20 Greatest Hits, is a greatest hits album by American swamp rock band Creedence Clearwater Revival. Released in January 1976 the album is a singles collection with 13 a-sides and 7 b-sides.

4.8 out of 5 stars
4.8 out of 5
6,107 global ratings
How are ratings calculated?
To calculate the overall star rating and percentage breakdown by star, we don’t use a simple average. Instead, our system considers things like how recent a review is and if the reviewer bought the item on Amazon. It also analyses reviews to verify trustworthiness.

dancingbear
4.0 out of 5 stars All the great songs in one place!
Reviewed in the United Kingdom on 4 December 2018
Verified Purchase
The late 60s and early 70s contained quite a mix of music, musical styles, and was dominated by British and American rock bands. Soft rock, hard rock, psychedelic rock, prog rock and heavy rock. In the main it was British bands in the vanguard. However, there were some outstanding American groups who brought a distinctive home-spun flavour to the table. My particular favourites were, and remain, Chicago whose brass section brought a different dynamic to rock.. Not only that, they survived some difficult times and went on to produce a stunning repertoire.

What have Chicago got to do with CCR you may be wondering at this point. Well it's like this. The former survived deaths and periodic changes to their line-ups; perhaps this added to their longevity and changes in style. The latter shone for a relatively short time under the direction of John Fogarty but, boy, did they produce some of the most memorable 'American' flavoured songs alongside Lynyrd Skynyrd and, slightly later, The Eagles . Had Fogarty not left at the height of their success, I wonder how much higher CCR would be on the roster of the greatest bands of all time.

You may be surprised how many of the songs you already know. Others will grow on you. There is some great guitar work.
Read more
6 people found this helpful
Report abuse

EX2RGJ
5.0 out of 5 stars Creedence Clearwater Revival-Chronicle.
Reviewed in the United Kingdom on 26 December 2017
Verified Purchase
The album was delivered early,{all the way from Pennsylvania,US.} I played it quietly as the trouble and strife was in, its Christmas day and the volume was hitting orbit, Every song is superb, it wouldn't be fair to select my favourite song, if you dont have Chronicle and am wondering, yes/no. buy it and you wont be dissapointed.
Read more
7 people found this helpful
Report abuse

Lazarus
4.0 out of 5 stars Near perfection
Reviewed in the United Kingdom on 2 September 2017
Verified Purchase
This is an almost perfect Creedence Best of album but it loses one star 4 star for the baffling omission of Born On The Bayou.
Read more
9 people found this helpful
Report abuse

EuroJonnie
5.0 out of 5 stars Creedence Clearwater Revival Greatest Hits Indeed!
Reviewed in the United Kingdom on 19 October 2020
Verified Purchase
Creedence Clearwater Revival Greatest Hits, great to hear this again. Top band! Speedy delivery and item in excellent condition.
Read more
2 people found this helpful
Report abuse
See all reviews
Back to top
Get to Know Us
Make Money with Us
Let Us Help You
And don't forget:
© 1996-2021, Amazon.com, Inc. or its affiliates