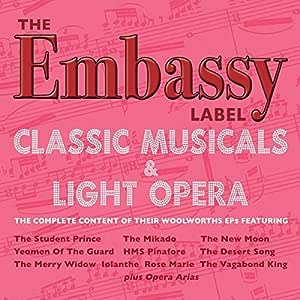 The Embassy label occupied a unique niche in the UK record business during the late 1950 and early 60s as the label on which budget-priced cover versions of current chart hits were released for exclusive sale in Woolworths stores, and it was massively successful, to the extent that the label retains an army of fans half a century later. Using orchestras, choruses and soloists drawn from the ranks of the best session and concert performers of their day, the label also recorded a succession of EPs and then LPs covering many forms of popular music, notably that of music from stage and screen, and this collection is devoted to part of that output. It brings together the tracks from the Embassy EPs which featured highlights of the era of operetta-style musicals by celebrated composers along with the renowned Gilbert & Sullivan comic operas. Included are highlights from The Merry Widow by Franz Lehar, The Student Prince by Sigmund Romberg and Dorothy Donnelly The Desert Song and The New Moon by Sigmund Romberg and Oscar Hammerstein, Rosemarie by Rudolf Friml, Herbert Stothart and Otto Harbach, and The Vagabond King by Rudolf Friml, along with Gilbert & Sullivans The Mikado, Iolanthe, HMS Pinafore and Yeoemn Of The Guard plus the bonus of some operatic arias. Once again its an evocative and entertaining selection of perennially popular material. It will undoubtedly appeal to Embassy label enthusiasts and collectors, but is also an excellent collection for those looking for an entertaining selection of recordings from this genre.

3.5 out of 5 stars
3.5 out of 5
2 global ratings
How are ratings calculated?
To calculate the overall star rating and percentage breakdown by star, we don’t use a simple average. Instead, our system considers things like how recent a review is and if the reviewer bought the item on Amazon. It also analyses reviews to verify trustworthiness.

Chris
5.0 out of 5 stars Five Stars
Reviewed in the United Kingdom on 29 October 2017
Verified Purchase
a great compilation!
Read more
Report abuse
See all reviews
Get FREE delivery with Amazon Prime
Prime members enjoy FREE Delivery and exclusive access to movies, TV shows, music, Kindle e-books, Twitch Prime, and more.
> Get Started
Back to top
Get to Know Us
Make Money with Us
Let Us Help You
And don't forget:
© 1996-2020, Amazon.com, Inc. or its affiliates