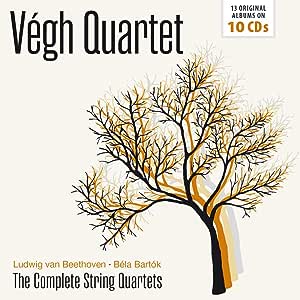 Secure transaction
Your transaction is secure
We work hard to protect your security and privacy. Our payment security system encrypts your information during transmission. We don’t share your credit card details with third-party sellers, and we don’t sell your information to others. Learn more
Details
Ships from
Amazon US
Sold by
Amazon US
New (2) from $30.22

The Vegh quartet, founded by the Hungarian violinist Sandor Vegh in 1940, is considered one of the most renowned string quartets of its time. Their worldwide recognition was due not least to their legendary recordings of Beethoven's and Bartok's string quartets, which are presented here in a total of 13 original albums. The Beethoven cycle, recorded in 1952, an undisputed highlight among the fascinating compositions by the genius from Bonn, was a focus of their musical partnership from the beginning. Not only are these recordings indispensable collectors' pieces for chamber music lovers; their recordings of Bartok's six string quartets, made in 1954, also set standards to this day. They owe their authenticity to the close connection with the composer, who had entrusted the ensemble with the premiere of his Fifth Quartet from this group.

Tim Poulter
3.0 out of 5 stars Age has not been kind
Reviewed in the United Kingdom on 28 August 2019
Verified Purchase
The Vegh Quartet for some are the pinnacle in terms of Beethoven Quartet interpreters, and that is no mean feat given the competition over the years.
Unfortunately, even this super bargain 10 CD box set, including the Bartok quartets recorded in the early 1950s has not stood the test of time.
The sound is hollow and blurs with much distortion on the low registers- though it might sound better on a top of the range system. For those who are fixated on the Vegh you would be better to seek out the cycle set down in the early seventies.
Comparing this set to others from an earlier period you are better to look at the Hungarian, Hollywood or Busch Quartets all available in much better transfers.
That said you can still hear a vitality in these recordings and for the same price as a packet of smokes you can't go far wrong even if you are just curious.
Read more
5 people found this helpful
Report abuse