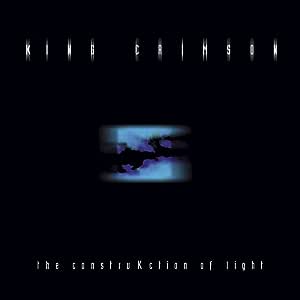 Secure transaction
Your transaction is secure
We work hard to protect your security and privacy. Our payment security system encrypts your information during transmission. We don’t share your credit card details with third-party sellers, and we don’t sell your information to others. Learn more
Details
Ships from
Amazon UK
Sold by
Amazon UK
New (8) from
$26.14 & FREE Delivery

Following the THRAK era double-trio incarnation of King Crimson the band fragmented into a variety of experimental outfits known as "Projekcts", a form of 'research and development' vehicle for the next stage in King Crimson's studio recorded output. When the band did reconvene to record, the line-up had settled to that of a quartet for the first time since 1984. The resulting album is one of the most sustained sonic attacks in Crimson's lengthy history. Mastelotto's powerful drumming and sample triggering combine with Gunn's bass flourishes to provide a dense sound world which Fripp & Belew could weave into, out of & around. The band's knack for reinventing itself was safely carried into a new decade. Unavailable since the end of 2003 the album makes for a welcome addition to the DGM catalogue.

4.4 out of 5 stars
4.4 out of 5
90 global ratings
How are ratings calculated?
To calculate the overall star rating and percentage breakdown by star, we don’t use a simple average. Instead, our system considers things like how recent a review is and if the reviewer bought the item on Amazon. It also analyses reviews to verify trustworthiness.

ANDREW
4.0 out of 5 stars Very underrated and unfairy maligned
Reviewed in the United Kingdom on 30 August 2018
Verified Purchase
This sits right in the middle of Thrakk and Power to Believe. For some reason that i can not understand it gets dismissed as a real stinker. Its not radically different from either albums it's main difference being its slightly heavier and that's about it. Of the 3 it's probably the weakest but that doesn't mean it's not good. If you like crimson don't let the negative press put you off and give it a go.
Read more
7 people found this helpful
Report abuse

Anglian Traveller
4.0 out of 5 stars KC moves on into the 21st century - and looks back to the glory days
Reviewed in the United Kingdom on 25 July 2013
Verified Purchase
The 2000-released `Construkction of Light' sees the double-trio line-up featured on `Thrak' pruned down to a quartet with the departure of percussionist Bill Bruford (a stalwart of KC since 1973) and stick-player/bassist Tony Levin (with KC since 1981's `Discipline').

The resultant Fripp-Belew-Gunn-Mastelotto foursome delivers a powerful, heavy and uncompromising guitar-dominated album full of adventurous compositions and unconventional time-signatures which at times sounds like John McLaughlin's 1970s Mahavishnu Orchestra quintet, on steroids and with vocals.

In style CoL is essentially similar to `Thrak' and to the excellent 2003 album `The Power to Believe'. But CoL is the darkest of the three, the most hard-driving, primeval and at the same time accessible collection. Adrian Belew in particular is on top form here, singing with gusto of depression and modern nihilism (especially the blinding opener `ProzaKc Blues') and delivering some stunning and memorable guitar work. The heavy-metal sounding `Larks' Tongues 4' and `FraKctured' re-capture the spirit of the 1970s band as though the 80s period never happened; these numbers would have fitted right in to the `Red' album.

Despite the presence of more mellow moments, CoL is too relentless and uncompromising to stand shoulder-to-shoulder with KC's greatest work; there's insufficient light and shade. It's good though - the least you would expect from musicians as capable and inventive as this crew, and carrying the KC name.

John M
5.0 out of 5 stars Sublime!
Reviewed in the United Kingdom on 4 August 2019
Verified Purchase
Larks’ Tongues In Aspic Part IV is on this CD. Worth buying for this alone.
Read more
Report abuse

Markie
5.0 out of 5 stars Five Stars
Reviewed in the United Kingdom on 5 January 2017
Verified Purchase
Wonderful. Im amazed that I have not come across this before
Read more
One person found this helpful
Report abuse
See all reviews
Back to top
Get to Know Us
Make Money with Us
Let Us Help You
And don't forget:
© 1996-2021, Amazon.com, Inc. or its affiliates