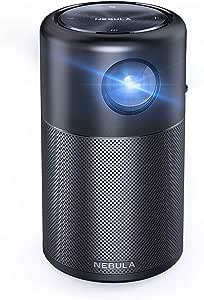 Visit the Anker Store
4.5 out of 5 stars 3,559 ratings
Secure transaction
Returns Policy
Your transaction is secure
We work hard to protect your security and privacy. Our payment security system encrypts your information during transmission. We don’t share your credit card details with third-party sellers, and we don’t sell your information to others. Learn more

4.5 out of 5 stars
4.5 out of 5
3,559 global ratings
How are ratings calculated?
To calculate the overall star rating and percentage breakdown by star, we don’t use a simple average. Instead, our system considers things like how recent a review is and if the reviewer bought the item on Amazon. It also analyses reviews to verify trustworthiness.

Matt
1.0 out of 5 stars Warning, does not come with Australian charger
Reviewed in Australia on 22 December 2018
Colour: BlackVerified Purchase
So far the projector is great. A few bugs in the OS but I’m sure Anker will get that sorted in future updates

From this seller, it doesn’t even come with an australian charger. I’m very disappointed because I chose this seller because in the sale screen it said “By Anker” as the seller. It was no cheaper then anywhere else but I feel like I’ve copped a grey import or something because it come with a dirty great big Type G plug (UK, Ireland, Hong Kong, Singapore).

One of the main reasons I chose the Nebula over one of the millions of cheap Chinese competitors is because I knew it came with a QC 3.0 charger (even if the battery is only QC 2.0 compatible). It took 19hrs to charge using an iPad 2A charger.

“Collect and store” information on “your search queries, IP addresses, hardware settings, browser type, browser language, the date and time of your request, referral URL, and certain cookies that identify your browser or Account.”

Their cookies “May contain information about Device (Device is your phone/computer/tablet) , including “user settings, browsing history, and activities conducted while using the Services.”
And, if you live in California like me they also “do not commit to honoring "Do Not Track" signals in your browser.”

Their definition of Content means any “information, text, graphics, written posts, executive files..,” and “other information matetials generated, provided, uploaded, downloaded, appearing or otherwise accessible on or through Nebula”. So, everything?

Their Terms indicate:
They’ll collect “the counts of opening certain application”. Not theirs, ‘certain’.

They’ll collect information on your phone/computer/tablet such as hardware and software versions and ‘so on’”. So on?

It’s s great product - super cool packaging, great display, solid interface. But I’m going to return it. It’s like getting a manicure and them rifling through my purse while they do it. Ultimately, it doesn’t matter how sparkly my nails turn out...

1. Dark image: In order to watch TV I had to wait until nigh fall, as even with dark curtains there was still too much ambient light to truly see what was happening on the screen.

2. Difficult to focus the image: I did not manage to get a sharp image over the full illuminated area, I could only get parts of the image in full focus (e.g. lower left corner) even at minimum keystone correction

3. Frustrating to use: I am used to Android devices, but I still found the menu counterintuitive and the input clunky (e.g. for typing wifi passwords). Admitted, I did not download the control app to my phone, which might have improved some input aspects. Also, the device constantly dissconnected from my wifi, which became really annoying.

I would not buy again, nor recommend to a friend.

Trevor Townsend
5.0 out of 5 stars Perfect if you understand the limitations
Reviewed in Canada on 9 November 2018
Colour: BlackVerified Purchase
I’ve had this speaker for about 2 months now and it’s been great to have. I set my expectations somewhat low and was expecting only to use the hdmi for movies through a laptop, but I’ve found it works so much better then that.

Image
The screen quality is ok, you can definitly tell it’s low resolution if you try to read small text. The image manages to still look fairly sharp throughout the ui or movies and could be easily mistaken for 720p. The brightness works great for dark enviroments up to about 120-140inches where you start to loose quality on something that isn’t a white surface. I’ve not used it much in the daytime, but had good results when not in direct sunlight and making the screen a smaller size. The image colour is perfectly usable without adjustments, though it’s definitly not the same as a TV or monitor. I played 4k John Wick blu-ray with my xbox one s and the blacks were a bit crushed in areas (start and end of the movie especially), but it doesn’t stick out much unless you are looking for it. Playing video games through hdmi was playable, but I would recommend anything else before trying to use this. I would say this is more of a “last resort” if you are missing a screen as any small monitor would be a much better experience. I would say the imput lag is about 100-200ms (average for a TV would be about 20-30ms) after using a nintendo switch on the device.

Sound
The fan is audiable when on and not playing content. It’s not a harsh sounding fan, but sounds like it’s moving a large amount of air through it. Speaker quality is great. Low amounts of bass, but certainly loud enough for movie watching outdoors with a group, or indoors in an open space. Bluetooth speaker hookup went well for my use case(I used the Flip 4 JBL), but I noticed slight lag when using it with hdmi content. No problems with content on the device.

User experience
All around great and easy to use. Home page is simple and can be navigated using the provided remote, contoller in the app, or mouse in the app. I prefered to use the app as you need to be behind the device for the regular remote to work. Netflix (I would assume to be the main app for this device) is featured on the home screen even before it’s installed and works great. Navigating Netflix may require the mouse to click certain options, but all the features are still there. You can download content for viewing offline, and that requires very little space. Nightcrawler (full length movie) is less then 500mb, and the starting episode for Brooklyn 99 is under 50mb. The movies still look great (I can’t believe it’s not 720p!) when downloaded. You are unable to sign into Youtube, but the app functions the same otherwise. I hooked up an xbox one controller through usb and blutooth directly and was able to control the ui with the remote directly. Downloaded a game called crossy road and it worked fine (looked like the best game on the store). The app selection isn’t great and is a knockoff of the playstore, but the basics are there (VLC, Youtube, Netflix, Amazon Prime Video, Spotify). Using the provided adapter I plugged in a usb a stick and was able to view images and files on the stick.
The projector feels well built and solid all around.

Others
Battery life is better then 4 hours so far, and can almost get you through two full movies without charging (probably 3 if they are shorter kids movies).
Pairing with blutooth isn’t the easiest, but works fine after the first time.
Charger is compact and charges fairly fast (2 hours maybe?).
Comes with a carry bag (would recommend a carry case though).
I think the storage is about 8-16gb, though I’m not sure how to check. You would need a few movies to fill it up.

Cons:
-Unable to sign into Youtube
-fan is audiable when not playing content (This isn’t a problem with specifically this projector, but something to be aware of when buying any projector)
-Price might be a bit steep for this product

Final thoughts
This is a great projector and I have recommended it to family and friends. Works well watching movies and TV shows on Netflix as well as Youtube videos and hdmi content. I would say this is more of a last resort for a pc monitor or playing games due to response time.

BerryCo
4.0 out of 5 stars Wonderful product
Reviewed in India on 8 April 2019
Colour: BlackVerified Purchase
Have been using the projector for a month. Value for money
Pro :
-very compact and portable
-Lightweight
-Focus can be adjusted
-Inbuilt speaker, if the sound isn't enough for you, Bluetooth speaker can be connected
-Can be charged while projecting
-Works well for 3-4 house with a full charge which is good for a presentation
- The app on the phone makes it easy to use and can be used a mouse
- the remote which comes with the projector helps a lot if you are sitting away from the projector
- to project from laptop you can connect HDMI cable and you can cast from your phone as well. It has inbuilt apps and you can download few more
- tripod stand can be attached as well

Well even after these cons the projector works well and it's value for money. Have been using it for watching movies and giving presentations using a tripod stand. Happy with the purchase
Read more
27 people found this helpful
Report abuse

Kat.C
5.0 out of 5 stars Anker makes awesome stuff
Reviewed in Canada on 13 June 2018
Colour: BlackVerified Purchase
My husband is in love with this and uses it every chance he gets. The speaker on it is 360 degrees so it doesn't matter where you sit, you can hear it just fine. Plays well even in lit room. Anker is known for it's great quality and has yet to let me down. I think my in-laws are jealous of this purchase and will be likely getting their own soon.

Editing my review to add some new stuff we found out while using this projector. I bought my husband a new hard drive to hook up to the projector so he could watch stored shows but then remembered there is only one usb slot so it wasn't possible to charge while watching. We started looking into how we could watch and charge (or slow battery drain). I found a multi port multifunction micro usb to usb OTG cable that allowed us to connect the hard drive and also had a dedicated spot for micro usb charge cable. We tested this cord and it worked wonderfully. I provided a link to the product we used to watch and charge.  ELEGIANT Multifuntional 4 Port Micro USB Power Charging OTG Hub Cable Cord Adapter Connector For Samsung S5 S4 S3 S2 BLACK
Read more
27 people found this helpful
Report abuse
See all reviews
Get FREE delivery with Amazon Prime
Prime members enjoy FREE Delivery and exclusive access to movies, TV shows, music, Kindle e-books, Twitch Prime, and more.
> Get Started
Back to top
Get to Know Us
Make Money with Us
Let Us Help You
And don't forget:
© 1996-2021, Amazon.com, Inc. or its affiliates