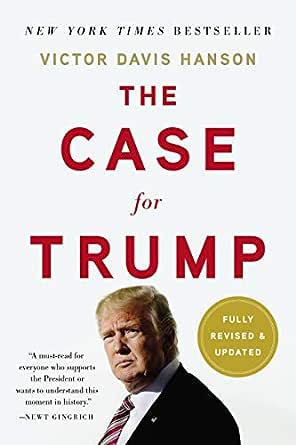 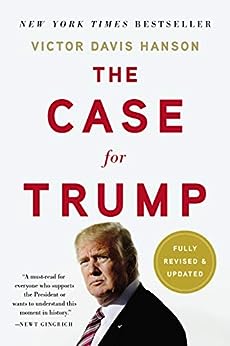 The Case for Trump Kindle Edition

Victor Davis Hanson is a senior fellow in military history at the Hoover Institution at Stanford University and a professor emeritus of classics at California State University, Fresno. He is the author of more than two dozen books, ranging in topics from ancient Greece to modern America, most recently The Second World Wars: How the First Global Conflict Was Fought and Won. He lives in Selma, California. --This text refers to the audioCD edition.

"A brilliant and bracing analysis from one of the great thinkers and writers of our time, and a farmer to boot - Victor Davis Hanson. Hanson understood the circumstances that gave rise to Donald Trump early on, how the president has made long overdue changes, and why his enemies seek to destroy him."--Mark R. Levin, -

"A necessary and important addition to the already existing body of literature on why and how President Trump defeated first his Republican rivals and later Democratic candidate Hillary Clinton... a timely and revealing book."--Washington Book Review

"A well-researched explanation of how Mr. Trump beat all odds to win the presidency, and also an account of his first two years in office."--Washington Times

"As a great historian, Victor Davis Hanson makes the case for President Trump with unique insights and historic understanding and clarity. A must-read for everyone who supports the President or wants to understand this moment in history."--Newt Gingrich, -

"Hanson is shrewd and insightful on Trump's appeal... one of the smartest conservative defenses of Trump yet published."--Publishers Weekly

"I come across books now and then, and I heartily recommend those I really like. But I'm just flat-out telling you to get this one. If you believe in Donald Trump, if you believe in the whole 'Make America Great Again' agenda, if you want to read some of the most intelligent defense of Trump, the most intelligent defense and explanation of Trump's agenda...the book is tremendous.... If you love Trump and if you're looking for ways to help other people who don't understand Trump to understand, this book is gonna be ideal."--Rush Limbaugh, - --This text refers to the audioCD edition.

As a great historian, Victor Davis Hanson makes the case for President Trump with unique insights and historic understanding and clarity. --This text refers to the hardcover edition.

Victor Davis Hanson is a senior fellow in military history at the Hoover Institution at Stanford University and a professor emeritus of classics at California State University, Fresno. He is the author of more than two dozen books, ranging in topics from ancient Greece to modern America, most recently The Second World Wars: How the First Global Conflict Was Fought and Won. He lives in Selma, California. --This text refers to the hardcover edition.

4.8 out of 5 stars
4.8 out of 5
2,338 global ratings
How are ratings calculated?
To calculate the overall star rating and percentage breakdown by star, we don’t use a simple average. Instead, our system considers things like how recent a review is and if the reviewer bought the item on Amazon. It also analyses reviews to verify trustworthiness.

There are 0 reviews and 5 ratings from Australia

K. Hamilton
5.0 out of 5 stars This is what the tippy top of truth to power looks like
Reviewed in the United States on 6 March 2019
Verified Purchase
This is fantastic insight from a brilliant man. If I had my choice of dream dinner guests #1 would be Mark Steyn and #2 would be Dr. Hanson. VDH is a gift from God and I will cherish his written words till my dying day. Also, the opposition to Trump is extremely misguided and false and the facts laid out in this book prove it. If you care about facts above feelings please read this book.
Read more
550 people found this helpful
Report abuse

Amazon Customer
5.0 out of 5 stars Trump Season One
Reviewed in the United Kingdom on 16 March 2019
Verified Purchase
As a resident of Britain i’ve been watching events in US with a mixture of horror and hilarity.

VDH has been one of my favourite columnist for some time. He seems to be one of the very few writers able to navigate his way through the labyrinth of American politics objectively.

Like much of his work this book will be revisited as an accurate account of this period in US history.

I’m looking forward to Season Two and the final analysis.

PS My Advice to all politicians is to ditch your expensive, know nothing Special Advisors and start listening to VDH
Read more
21 people found this helpful
Report abuse

Veritas
5.0 out of 5 stars One of the best books I have ever read - Its a 'Must Read'
Reviewed in the United Kingdom on 19 April 2020
Verified Purchase
In my life, of over 60 years I have read many hundreds of books. I would put this one in my top three. I mean it.

1. Dr Hanson is an intelligent, insightful and reflective academic. (There are fewer and fewer of those these days)
This book draws on many sources of fact to comprehend and analyse. This make the subsequent synthesis and evaluation both authoritative and checkable.

2. The author draws on ancient history, literature and recent history to create a narrative that sets the striking improvements Trump has created and the evil he faces from the 'Swamp' in a clearly understandable manner.

3. Anyone interested in the necessity to have disrupters who challenge anti-democratic charlatans and cheats such as; the Obamas, Clintons, Bush, McCain, hard left media MSNBC, CBS, BBC, CNN, ITV .... et al and the now-communist-leaning US Democratic Party will get a more comprehensive understanding of how to bebunk their attacks on democracy.

This is a well balanced, well written authoritative account of why the free world needs a Donald J Trump.

P. Rö
4.0 out of 5 stars A new perspective on Trump
Reviewed in the United Kingdom on 25 May 2019
Verified Purchase
I am used to hear of how dangerous and crazy Trump is. Hanson offers a new perspective on this president. He sees him as a tool for the Republican party - a kind of tough guy vigilante like Dirty Harry who gets the job done. I am not totally convinced he is a good thing for USA but I got a more nuanced view on him after reading this book. The book is most entertaining when it describes the bad campaign the Hillary Clinton had and the hysterical and agressive reactions after Trump won the election. An interesting story. However, I think he wrote it to early. Hansen is a historian and he could have waited untli his presidency is over. I predict that "The case for Trump" soon will get old because everything is changing so fast.
Read more
6 people found this helpful
Report abuse

Bill M
5.0 out of 5 stars The most honest take I have seen.
Reviewed in the United States on 7 March 2019
Verified Purchase
Dr. Hanson is a great writer, serious and informative. This is the most neutral book about Trump I've read. Facts are the most important things.
Read more
433 people found this helpful
Report abuse
See all reviews
Back to top
Get to Know Us
Make Money with Us
Let Us Help You
And don't forget:
© 1996-2021, Amazon.com, Inc. or its affiliates