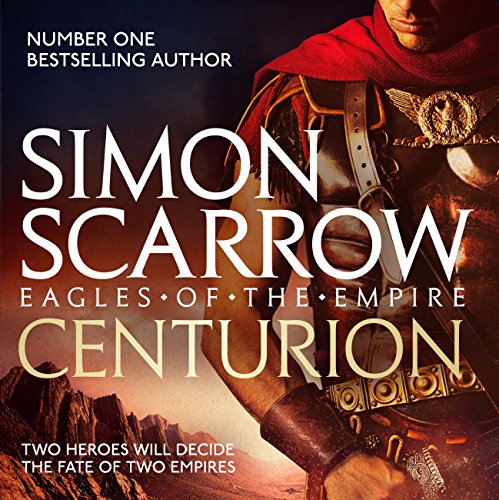 Centurion: Eagles of the Empire, Book 8

Centurion, a no. 1 best-seller, is the unputdownable eighth novel in Simon Scarrow's Eagle's of the Empire series. Perfect for fans of Bernard Cornwell and Conn Iggulden.

In the first century AD the Roman Empire faces a new threat from its long-standing enemy Parthia. Parthia is vying with Rome for control of Palmyra, an officially neutral kingdom. Palmyra's royal household is on the brink of open revolt, and so a task force under the command of experienced soldiers Macro and Cato is dispatched to defend its king and guard its borders. When Parthia hears of the Roman army's presence, it starts amassing its troops for war.

Macro's cohort must march against the enemy, deep into treacherous territory. If Palmyra is not to fall into the clutches of Parthia, they will have to defeat superior numbers in a desperate siege. The quest for a lasting peace has never been more challenging, nor more critical for the future of the Empire.

Switch between reading the Kindle book & listening to the Audible narration with Whispersync for Voice.
Get the Audible audiobook for the reduced price of $8.99 after you buy the Kindle book.
Final days - Don't miss out!
Learn more about membership
By completing your purchase, you agree to Audible’s Conditions Of Use and Privacy Notice.
Sold and delivered by Audible, an Amazon company

4.7 out of 5 stars
4.7 out of 5
826 global ratings
How are ratings calculated?
To calculate the overall star rating and percentage breakdown by star, we don’t use a simple average. Instead, our system considers things like how recent a review is and if the reviewer bought the item on Amazon. It also analyses reviews to verify trustworthiness.

Brian Lucas
5.0 out of 5 stars Real World History and Fiction. The Series Played Out Beyond My Wild Imagination.
Reviewed in the United Kingdom on 1 April 2022
Verified Purchase
I have been enjoying the Eagle series, and a late comer to Simon; still have two more to go, and devouring the series for the adventures of Cato and Marco, with there adversaries and the situations they become embroiled in... never thought I would latch on to this type of fiction, based on real historical events.

I mostly like Science Fiction that has a good dose of reality, and a bit of fantasy thrown in; but the world created from Simon's research and taking real events from Rome, in a good a plausible story; then add one's own imagination from the seen being laid out; especially, if you have travelled to the middle east... I just have cinematic panorama, of what the terrain Marco and Cato are located within, while the events unfold around them.

A wonderful series, will leave a large gap in my sole by the end book; but hay, Simon has other adventures to share. Highly recommend this series.
Read more
Report abuse

Simon Binning
4.0 out of 5 stars A return to form
Reviewed in the United Kingdom on 14 November 2012
Verified Purchase
Review of the series (followed by a review of this book):
This series of books is based around the adventures of two men - Macro and Cato. Macro is a soldier through and through; he has spent his life in the army and is a centurion when we first meet him in the first book. In that book we also meet Cato who joins the legion as a new recruit, although he seems an unlikely candidate for a soldier. The series goes on to relate their many adventures and the relationship between them. Most of the stories are based - sometimes loosely - on real events and people, with a healthy dose of artistic license.
As far as I can tell the historical detail and facts are accurate, and the writing is generally engaging. There are criticisms in other reviews about the authors use of 'modern' slang; I know what they mean, but would we identify with 'roman' slang? For me, it is not a problem, I am not a fan of trying to invent historical language, it is too easy to fall into the 'ye olde shoppe' trap!
Overall, the series is very readable, and rolls along at a good pace. Like some other historical series, it doesn't do to try and fit the events into a timeline, as it soon becomes clear that the two men could not have done everything they do in one lifetime, but that doesn't detract from a fun series. I would also add that with this, the 8th book, the publishers have finally decided to format the kindle version properly! My only niggle now is that they are a little over-priced.
Review of this book.
Our heroes are still in the east, helping shore up their friendly neighbour Palmyra against one of Rome's greatest enemies, Parthia. Once agin, there is treachery around every corner, and lots of battles. There is even a romantic element in this episode, although I'm not sure it is the author's forte! This book is a return to form after the rather disappointing last book.
Read more
4 people found this helpful
Report abuse

J Holden
1.0 out of 5 stars Spoiler
Reviewed in the United Kingdom on 24 October 2018
Verified Purchase
This is a great series and I'm loving the story lines and this is a criticism of Kindle rather than the author. The book finished at 92% which is unusual, the remaining 8% gave a taster for the next book (supposedly). This actually sprang forward 10 years and although I did think this unusual, I thought it was part of the story. After getting to the end, I scrolled back and re-read the trailer and found that the taster was actually for book 15.... So I now know what has happened to some of the main characters in 7 books' time. For the life of me, I cannot fathom why Amazon/Kindle would be trying to entice me into buying the next book with something so bizarre as this?
Disappointing is an understatement
Read more
One person found this helpful
Report abuse

Davymac
5.0 out of 5 stars Exciting read
Reviewed in the United Kingdom on 22 March 2020
Verified Purchase
Good story about Macro and Cato and the Roman legions plenty of action and plots story is fast paced and exciting read I couldn't put it down highly recommend this book
Read more
Report abuse

Myke
4.0 out of 5 stars Enjoy
Reviewed in the United Kingdom on 18 September 2017
Verified Purchase
Another adventure for our plucky heroes. I would really recommend reading these books in order, you don't have too as they are stand alone books but they are all so good.
Read more
Report abuse
See all reviews